The England Football Association has bowed to growing pressure surrounding the Eni Aluko “hush-money” case by revealing the reasons why the barrister they employed to investigate the matter cleared the England women’s team manager, Mark Sampson, of allegedly making a comment with “racial and prejudicial” connotations to the player. 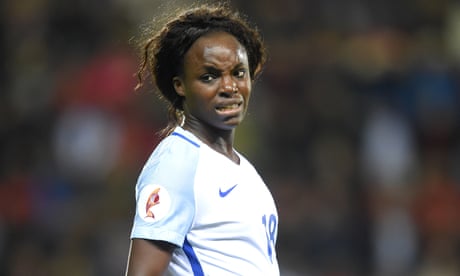 FA under pressure to explain £80,000 payment to Eni Aluko after bullying complaint

Sampson has been absolved of any wrongdoing, having been accused of making the remark to another player, but he has acknowledged a need to improve his “general communication skills” in line with the recommendations of the inquiry.

The England manager disputed making the alleged comment and Katharine Newton, the barrister who led the three-month investigation, exonerated him after watching a video of the meeting where he was said to have turned to one of Aluko’s younger team-mates “a mixed-race player from south London” – after using an analogy about getting a “police caution” and allegedly asked her: “Haven’t you been arrested before? Four times isn’t it?”

The player in question is not understood to have been interviewed as part of the inquiry or by an internal FA review that also cleared Sampson.

Aluko had described her team-mate as “distressed” and other sources have told the Guardian the same. At least one other player who was with England during the China Cup in 2015 said she believed the comment was made.

However, the official report notes that the video evidence, recorded by an FATV cameraman, does not show the manager making any comment of that nature.

“The player in question is in the video, as are three other white players and Mark Sampson,” a 15-page summary of Newton’s final report states.

“The sound is clear and there are no references to police cautions or anyone being arrested, let alone a suggestion directly to the player in question that she has been arrested.

“Mark Sampson has no recollection of making the complaint and says he cannot imagine suggesting to a player they have been arrested. You [Aluko] were not present at the meeting and so cannot provide any direct evidence as to what was or what was not said. I do not dispute your account that the player in question was upset about something she thought had been said and conveyed this to you. However, having watched the video and heard the evidence, I do not consider there to be sufficient evidence to uphold this complaint.”

The FA followed up the inquiry by paying Aluko about £80,000 as part of an agreement and awarding her a central contract, worth another £20,000, even though she had made it clear she would not play for England again while Sampson was in charge.

The explanation for the agreement was that the FA wanted to “avoid disruption” before this summer’s Euro 2017 tournament. Aluko’s lawyers believe that the agreement prevents her from speaking about the case but the FA insists she is now free to talk.

Aluko’s case against Sampson made a number of other allegations about his behaviour in the England set-up, citing eight specific incidents, but Newton did not find the manager guilty of any wrongdoing.

“I do not consider that Mark Sampson has held a long-standing negative bias against you [Aluko] based on negative racial stereotypes,” the barrister concludes.

“Nor do I consider he subjected you to a course of bullying or belittling behaviour. I should add that I consider you genuinely have been treated in this manner. However, I do not consider there is sufficient evidence to support that belief or to draw an inference of discrimination.”

The FA’s decision to publish the findings came after the Guardian’s revelations on Wednesday about the content of Aluko’s complaint and has led to an admission from Sampson that there are areas of his behaviour, specifically his communication, that need improvement.

“I fully understood and welcomed the need for an internal review and an independent investigation by an expert on employment and discrimination law,” he said in a statement.

“It’s incredibly important that matters like this are taken extremely seriously and investigated in the right way – with the right level of sensitivity and support for all involved.

“The barrister’s final report said there was no case to answer and noted that my approach to all players is the same regardless of their background. I also appreciated that the report highlighted areas where I could improve my general communication style, and that is something I have taken on board and looked to improve.”

Aluko, last season’s top scorer in the Women’s Super League, made the complaint in the form of an eight-page email in May 2016 and Newton took evidence from “10 individuals” before a 57-page report was delivered to the FA.

Earlier on Wednesday, anti-discrimination groups called for more transparency around the case and the circumstances in which the payment to Aluko was made.