If only Fifa had a vice-president in charge of delivering that classic line of movie cliche: “You don’t know who you’re dealing with!” I would settle for this chap– it probably would be a chap, let’s face it – being paid £450,000 a year, with an annual package including a Lexus, a black Amex, and 280 expensable escort encounters.

Having said that, if Zurich wanted to break the habit of a lifetime and do the same job on the cheap, they could just get someone to show Gianni Infantino the bit in Blade II where Wesley Snipes goes: “You obviously … do not know … who … you … are … fucking with.”

Or maybe the bit in Crocodile Dundee where some smalltime villain pulls a bonesaw on Paul Hogan, and he has to get out his bonesaw and say “Nah mate, that’s not a bonesaw. This is a bonesaw.” (I may have misremembered some of the weaponry; the 80s was yonks ago.)

Anyway, the Fifa executive should show these simple film clips on a loop, each time saying “this, but for the Saudis”, until the Fifa president dimly grasped it.

Unless that vital operational role is filled at Fifa HQ, alas, Infantino is expected to continue to make dangerously morally suspect and grasping decisions in the name of “growing the game”. It is presumably why this week’s Fifa conference in Kigali in Rwanda is still to discuss plans for a new competition backed by Saudi money. 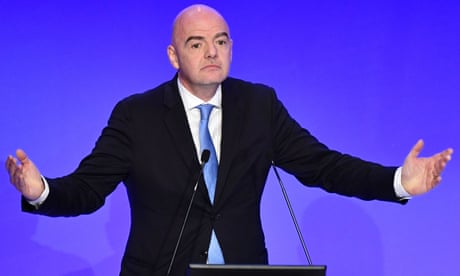 If you missed this news back when it was merely a terrible idea, and not a come-and-get-me plea to the international community, Infantino announced to the Fifa council meeting in March that he was considering £25bn worth of offers for a stake in two new competitions.
These would be a global Nations League, and a revamped version of the Club World Cup. He told members that 49% stakes in these competitions would be sold to third parties – then claimed he couldn’t tell them which third parties, on account of the fact he’d signed confidentiality agreements.
A bit odd – then again, we are talking about an organisation slightly less transparent than most CIA blacksites.
It was left to the Financial Times to reveal that the offer was from a consortium led by Japanese conglomerate Softbank.
Softbank’s largest investor is Saudi Arabia, whose sovereign wealth fund has popped $45bn into its fund.

What Infantino would say at the time about this vast mystery cash injection was: “I wouldn’t have any issue it if was Saudi Arabia, Qatar, Russia, the United States, China, Japan … the more, the better.” To which the only possible response is: WHY wouldn’t you, you useful idiot?

Clearly, “the more the better” has long been Fifa’s motto. And on a personal level, Infantino won the presidency by promising to quadruple the funding given by Fifa to national associations. He must face another presidential election next year, so was unlikely to feel too fussy about where his meal ticket was coming from.

That was then. The idea that Fifa are still tabling discussion of this financial power-grab in light of what we might euphemise as “the current news” about Saudi Arabia is certainly eye-catching. Infantino has met with Saudi Crown Prince Mohammed bin Salman three times in the past year alone, and once with King Salman.

You’d think he might seek to underplay this cosiness at present, as many parties with significant exposure to Saudi interests have been (including, naturally, the British government).

Uefa are reported to be planning a walkout if the Fifa president presses ahead with his scheme in Kigali, as the most powerful of a range of football interests set against the idea.

In May, the Uefa president, Aleksander Ceferin, told EU ministers: “I cannot accept that some people who are blinded by the pursuit of profit are considering to sell the soul of football tournaments to nebulous private funds.

Money does not rule – and the European sports model must be respected. Football is not for sale. I will not let anyone sacrifice its structures on the altar of a highly cynical and ruthless mercantilism.”

And so to the merchant-in-chief, whose attempts to disguise his trolley-dashes as idealism remain somewhat unconvincing.

It was only a few months ago that Infantino was holding a joint press conference in Tehran with the Iranian sports minister, Masoud Soltanifar, who welcomed Fifa’s “non-political approach”. Infantino couldn’t have agreed more.

This is, of course, merely the latest example of the sort of platitudinous nonsense in which he specialises. It is incredibly awkward to have to explain concepts such as “the Saudis” and “shitbaggery” to the Fifa president, who seems loftily to imagine himself above politics, and certainly above being politically manipulated.
However, if it falls to me … Pop quiz for Infantino: why is the Saudi Crown Prince talking about paying gazillions into football? Do you reckon it is because a) he just really likes paying gazillions into football or b) this is something political? Come on, buddy – if you absolutely had to call it one way or the other?

For an organisation that demands World Cup bids are underwritten by governments, Fifa’s pose as non-political is arguably its least convincing.

For decades, world football’s governing body has ricocheted as convenience demands, between declaring itself a major force for political good on the planet, and suggesting that football is just a little old game and can’t be expected to get involved in value judgments about where it gets its money.

In this respect, Infantino is continuing the work of his predecessor.

Even as he presided over a rabid kleptocracy, Sepp Blatter continued to angle for a Nobel peace prize.

For all the new-broom shtick, Infantino is merely serving up more of the same if he imagines himself as something other than the mark at this particular table.

Last week, Amnesty warned Rafael Nadal and Novak Djokovic that even taking part in a lucrative exhibition match in Jeddah in December could amount to “sportswashing”.

As the organisation’s head of advocacy and programmes put it: “It’s clear that countries like Saudi Arabia are well aware of the potential for sport to subtly ‘rebrand’ a country.” But is the Fifa president? And if so, does he even care?

On current evidence, the answer is no, and Fifa continues to provide the world’s most expensive laundry service for any horror willing to pay.