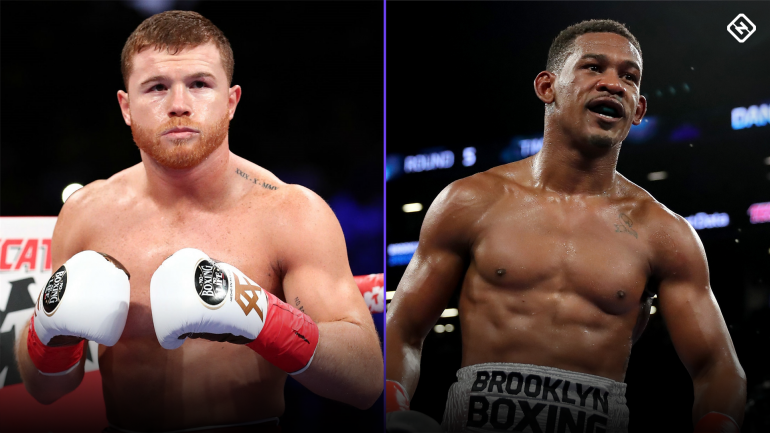 On Saturday, Canelo Alvarez will put his Ring, WBA and WBC middleweight titles on the line against IBF counterpart Daniel Jacobs at the T-Mobile Arena in Las Vegas.

Canelo, who is ranked No. 3 on The Ring’s pound-for-pound list, turned professional in 2005 and has unified world titles at junior middleweight and middleweight. The 28-year-old boxer-puncher has defeated Shane Mosley (UD 12), Austin Trout (UD 12), Erislandy Lara (SD 12), Miguel Cotto (UD 12) and Gennady Golovkin (MD 12) en route to becoming the biggest star in boxing. His current record is 51-1-2 (35 knockouts).

Jacobs, who is ranked No. 2 by The Ring at 160 pounds, turned professional in 2007. He earned his first world title opportunity three years later but was stopped by the hard-hitting Dmitry Pirog in five rounds. In 2011, Jacobs was diagnosed with cancer, but “The Miracle Man” recovered and has gone on to fulfil his dreams and claim a world title.

Former Jacobs opponent Sergio Mora preferred not to make a prediction but is looking forward to the fight.

“Jacobs’ size and power will definitely be felt by Canelo, there’s no doubt about it,” said Mora. “Two power-punchers, but ultimately, this fight will come down to speed and technique.”

How will Canelo deal with the naturally bigger man on this occasion? Can Jacobs overcome the odds in Las Vegas to pull the upset?

Here’s how the experts see it:

TOM GRAY: CANELO TKO 10
Jacobs’s height, range, speed, athleticism and size will undoubtedly cause the Mexican icon some problems, but I expect Canelo to adjust accordingly and turn the fight in his favor. He may have to come from behind to win, but I think Canelo takes control of ring center and makes Jacobs work harder than he wants to. The body attack is crucial and Canelo must punish the midsection at every opportunity. Jacobs might turn southpaw intermittently, but Canelo will be expecting that and he has the timing and the weapons to match his man if he switches. A distance win for Canelo in Las Vegas is the smart call, but I foresee the Cinco De Mayo celebrations starting early when Jacobs can no longer absorb the punishment coming his way.

LEE GROVES: CANELO UD
I expect a moderately paced war of nerves instead of a firefight, but I believe Alvarez’s accuracy will help him surmount Jacobs’ advantages in height and reach and that his solid chin will absorb the bombs well enough to remain upright and win a tight decision.

MICHAEL WOODS: CANELO UD
Canelo…Day-um did he impress me up close and personal as he demolished Rocky Fielding. Yeah…I know, Fielding was no Balboa. But the way he did it… so smooth and savage. It impacted me. Will he impact Jacobs in the same way? No way, shape or form. At least, not for a spell. Danny is a significantly better athlete than Rocky. And maybe at the peak of his athleticism. If Jacobs is right… his legs, his mobility, he has that over the Mexican. But Canelo is operating at another frequency now. His belief in self brings him to that A level. I think (I hope?) we see some classic rounds, more than one… and a decision, no one is staying down. Canelo unanimous decision, by three point margin.

ANSON WAINWRIGHT: CANELO UD
Excellent fight. Both will have their moments but ultimately I feel it’s Canelo’s fight. Jacobs’ size may prove troublesome early, but Canelo will steadily work behind the jab and land the flashier punches. I think Canelo wins an 8-4 kind of decision.

RON BORGES: CANELO
This is basically Jacobs’ last chance at making it to the top. He will have a size advantage over Canelo that will cause Alvarez some problems. But, in the end, Canelo is fresher, more technically sound and has proven he can take a good shot and respond. He’ll have to this time and he will. Alvarez by decision after some mid-fight problems.

NORM FRAUENHEIM: CANELO UD
Canelo is expected to win, which is another way of saying he has the most to lose, both in terms of his rich DAZN contract and his place in the
pound-for-pound debate. Those are reasons to be cautious. Reasons to be tactical. He’ll have to be both against the taller Daniel Jacobs, whose three-inch advantage in reach, evident power and agile foot speed pose a risk. With little to lose, Jacobs might be willing to take some chances. He’ll have to. Jacobs has the skillset to keep it close, but he’ll need a knockdown or two if he has any hope of winning on Vegas scorecards. Ask Gennady Golovkin, who is 0-1-1 versus a poised and patient Canelo, who knows how to win the close ones.

MARTY MULCAHY: CANELO SD
This is one of the few fights between elite athletes where the result may hinge more on how well a boxer rehydrates (to gain a physical advantage), rather than which one is the superior boxer. Both Alvarez and Jacobs are known for packing on the pounds in 30+ hours after weigh-in, and Jacobs has an extra 3 inches of height and reach to maximize that advantage. I actually see more paths to victory for Jacobs, but he has come up short against the very best. Betting the draw is a good option here in my opinion. However, I believe Alvarez breaks Jacobs down in the late rounds, scoring a knockdown in the championship rounds to edge a controversial split decision victory.

JOLENE MIZZONE (MATCHMAKER, MAIN EVENTS): CANELO TKO 10
I think this is a great fight, and I give Danny a chance, but I think Canelo has fought the better competition throughout his career. That always helps in big fights like this one.

KATHY DUVA (CEO, MAIN EVENTS): CANELO UD
Danny Jacobs has impressed with his punch and his chin in recent years. But I think the fight will go the limit, so it will be very hard for Jacobs to pick up the win. After all, the fight is in Vegas! If it goes the limit, Canelo gets the nod. And I don’t think that Danny, as talented and skilled as he is, can knock Canelo out.

RODNEY BERMAN (PROMOTER, GOLDEN GLOVES): CANELO SD
The common denominator of course is GGG, which in my opinion makes Canelo-Jacobs a “pick em fight”. I’m convinced that GGG was hard-done by in both fights, and that his fight with Jacobs, although a unanimous decision, was much closer. Being in Vegas, a split decision for Canelo.

RUDY HERNANDEZ (TRAINER): CANELO UD
I think it will be an OK fight. Canelo will beat Jacobs by unanimous decision. Jacobs’ last fight he didn’t look as good, and I can’t see him being a big threat to Canelo. Canelo won’t take big risks and will win an easy decision. Can’t see it being too competitive.

NISSE SAUERLAND (PROMOTER, SAUERLAND EVENT): JACOBS
Honestly hard to pick, it’s going to points no matter what. If I had to pick, close points victory to Jacobs.

DUKE MCKENZIE (FORMER THREE-WEIGHT WORLD TITLEHOLDER/TV ANALYST): JACOBS MD
Canelo v Jacobs, well it’s about time, now we will see what Canelo is made of. I mean, don’t get me wrong, up until this point he’s looked pretty good. But I still don’t think he’s a true middleweight and blowing away Rocky Fielding doesn’t make you great. Now, if he were to destroy Daniel Jacobs, boy oh boy, that makes a real statement. Jacobs is a real solid pro who does everything by the book. He is a true middleweight with an attitude to the sport like that of “Real Deal” Holyfield. I can see Jacobs winning this magnificent match up by a majority decision.

LIAM WILLIAMS (BRITISH MIDDLEWEIGHT CHAMPION): CANELO
I think Canelo in a close points decision. I wouldn’t be totally surprised if Jacobs wins, or should win but won’t get the nod.

JOHN SCULLY (TRAINER): CANELO
I see it as being a very, very closely contested fight the whole way through. I think Danny is going to give Canelo the toughest challenge of his career. I think Danny is a super-live underdog in this fight, but between skills, politics and sentiments, I probably see Canelo coming away with a very close and maybe even disputed decision.

WAYNE MCCULLOUGH (FORMER WORLD CHAMPION): CANELO
It’s a tough fight. Jacobs is all around sound but I love the way Canelo can adapt and change things up like he did in the second fight with GGG. Canelo will use his jabs to win rounds but will invest in hard body shots to slow Jacobs and maybe force a stoppage late in the fight.

MIKE ALTAMURA (MANAGER): CANELO TKO 6
It’s a tough fight to call. I envision Canelo stalking and working the body early and Jacobs trying to stick and move. I think, eventually, Canelo’s body assault pays off, culminating in a mid-round stoppage.

TONY TOLJ (MANAGER): CANELO
Canelo vs. Jacobs is boxing fan’s dream. It’s the best vs. the best and in their primes. Golden Boy vs. Matchroom. Two promotional powerhouses. I believe this is a legit 50-50 fight. I slightly favor Canelo, four years younger with 54 pro fights under his belt with elite opponents from all styles. My pick is Canelo.