French prosecutors have opened an investigation into potential corruption relating to Fifa’s vote for Russia and Qatar to host respectively the 2018 and 2022World Cup finals, sources close to the investigation have confirmed.

Investigators are understood to have interviewed Sepp Blatter, who was the Fifa president at the time of the controversial December 2010 vote by a majority of the executive committee. Michel Platini, the former Uefa president whose decision to cast his vote for Qatar was crucial to the Gulf state winning a majority vote, has not been interviewed, the sources said.

Platini has acknowledged he changed his intended vote for the 2022 World Cup host from the US to Qatar following a lunch at the Élysée Palace with the president of France, Nicolas Sarkozy, and the current Emir of Qatar, Tamim al-Thani. Platini has indicated it was clear Sarkozy, whose government was seeking extensive trade deals with Qatar, wanted him to vote for the Gulf state but has always insisted he did not do so because of that pressure. 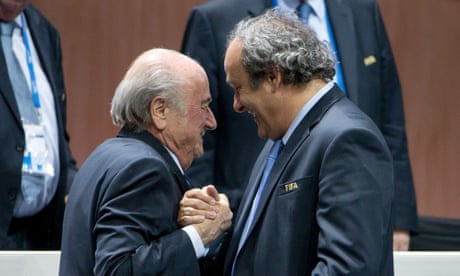 The opening of the investigation, by the Parquet National Financier, which is responsible for law enforcement against serious financial crime, means there are now criminal investigations in at least three countries into the World Cup vote. The US criminal proceedings headed by the Department of Justice have said their investigation includes the vote, as has the Swiss attorney general, Michael Lauber, whose office said last February it was examining 152 reports of suspicious financial activity relating to the process. No criminal investigations relating to the 2010 vote have yet begun.

The PNF’s preliminary investigation is into possible corruption and “trading of influence” in aspects of the voting process relating to France. Blatter was interviewed last week following a cooperation agreement with the Swiss authorities.

He has always denied any wrongdoing relating to the World Cup vote, or any other aspect of his 17-year tenure as the Fifa president, and has insisted he will not be charged with any criminal offences. He has since his ban from football claimed he wanted and lobbied for the 2022 World Cup to be hosted by the US, and has criticised Platini for changing his vote in favour of Qatar.

Both Blatter and Platini lost their presidencies and are serving bans from all football activities, due to a £1.3m “disloyal payment” by Fifa to Platini in December 2011, not related to the World Cup vote, which Fifa’s ethics committee found to have been a conflict of interest and breach of football’s world governing body’s ethics code.