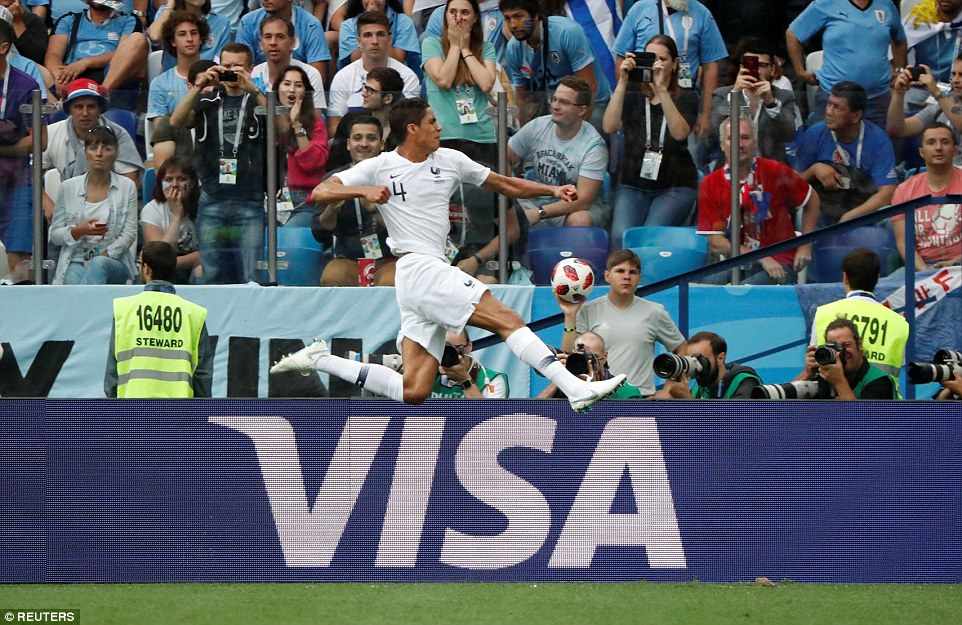 Antoine Griezmann may like to sip yerba mate and hang out grilling meat with his Uruguayan chums but his loyalties were not in question as a goal and an assist fired France into the last-four of the World Cup.

Griezmann’s quandary had been one of the pre-match narratives since he once confessed to a deep affection forUruguay reinforced by his close friendship with Atletico Madrid teammates Diego Godin and Jose Gimenez.

Godin is godfather to his daughter but there was no room for sentiment in Nizhny Novgorod. 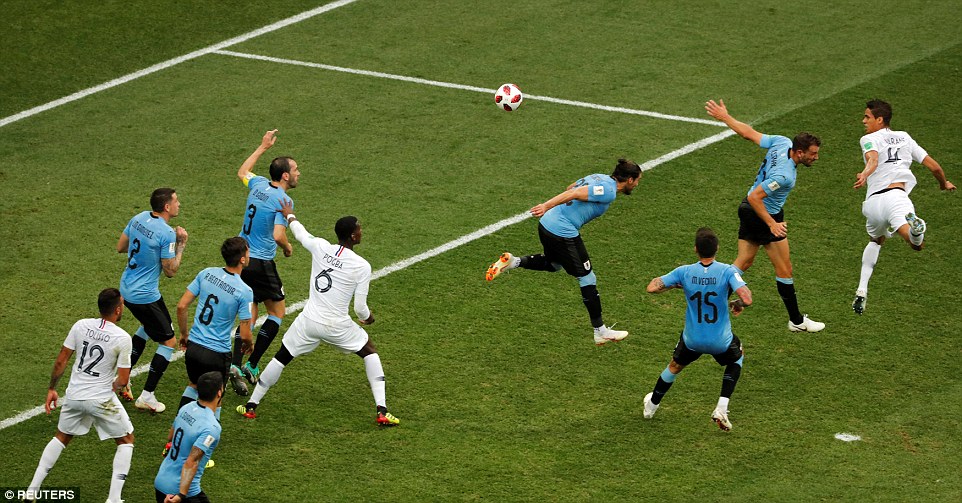 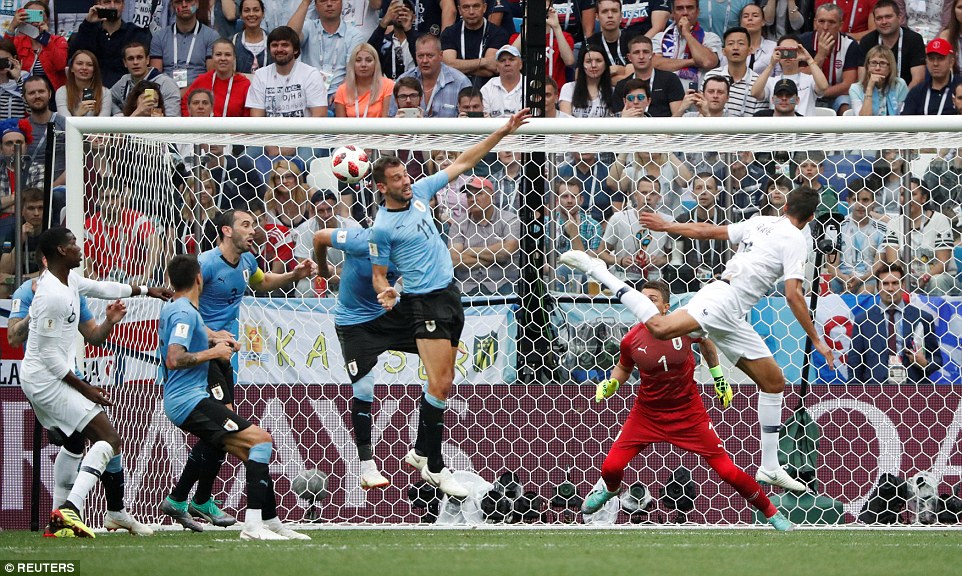 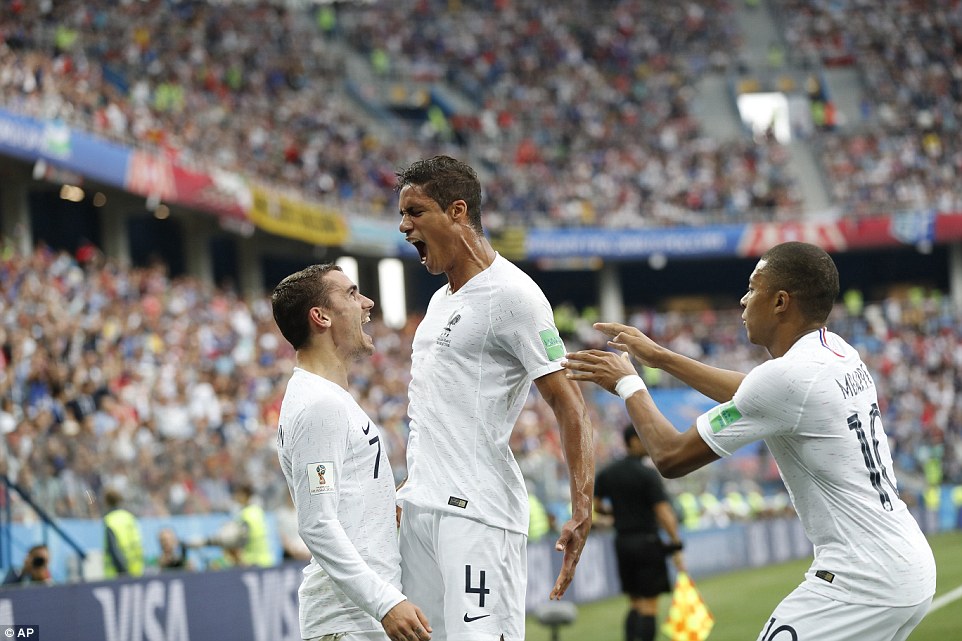 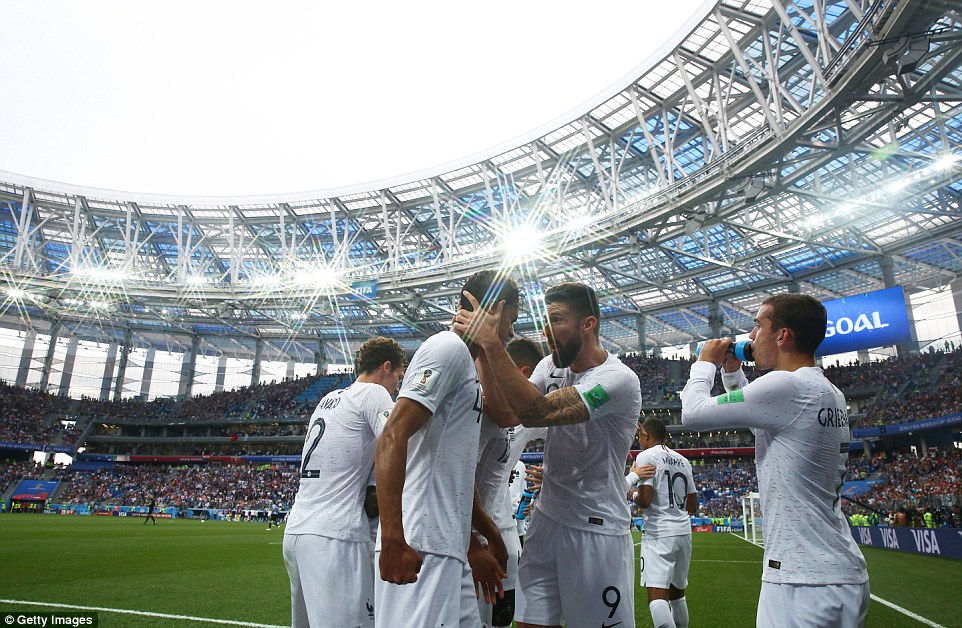 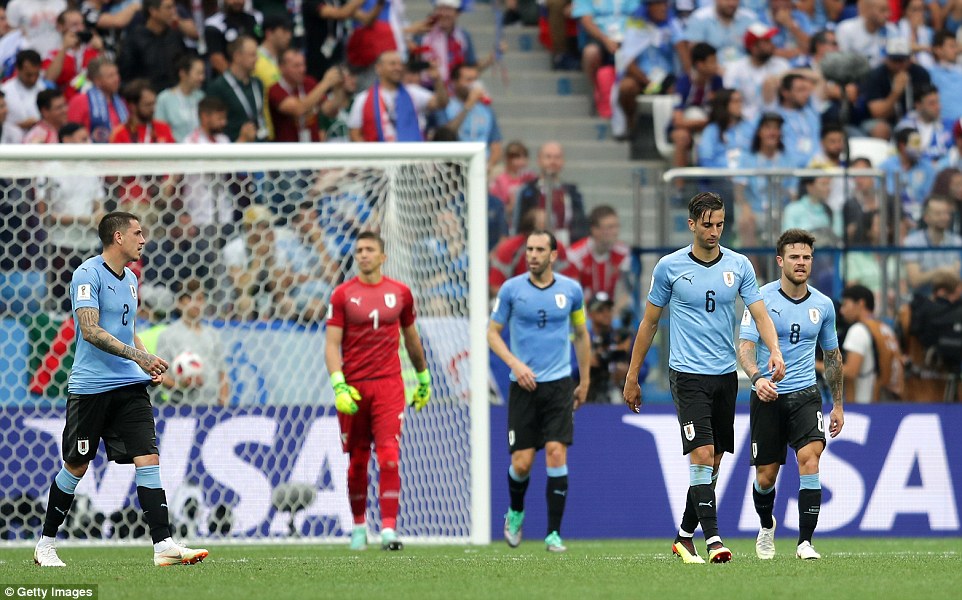 Griezmann created the opener for Rafael Varane just before half-time and killed the Uruguayan fight when he scored the second from distance with the considerable help of a goalkeeping howler from Fernando Muslera.

It’s France who move onto a semi-final in Saint Petersburg.

Uruguay without the galloping force of Edinson Cavani up front were simply not able to damage France as they had Portugal in the previous round.

Cavani picked up a calf injury after scoring twice against the European champions and, after days of cloak and dagger shenanigans around his fitness, he was named on the bench and was not even fit enough to come on when they were chasing the game.

Without him, and for all their fabled fighting spirit, Uruguay did not seem to have the same belief.

Luis Suarez bustled around, barging into people and trying upset the rhythms of the game but this time the task was too great against a very strong France team and they knew all hope had gone.

Gimenez was in tears on the field even before fourth official had put the board up to show five minutes of stoppage time.

Cristhian Stuani, who came in for Cavani, was lively in the opening stages and Hugo Lloris had to be out alert to punch clear and stop him reaching a knock down from Gimenez following a corner.

France were without Blaise Matuidi, who was suspended. Corentin Tolisso came in to replace him.

It was a tense and fractious opening as it always promised to be and early chances were scarce. 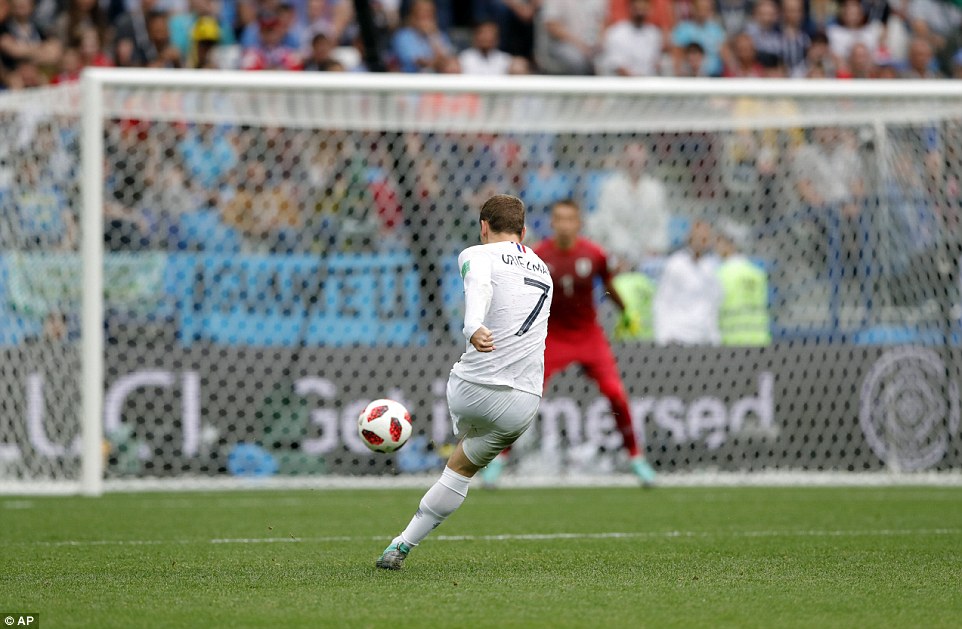 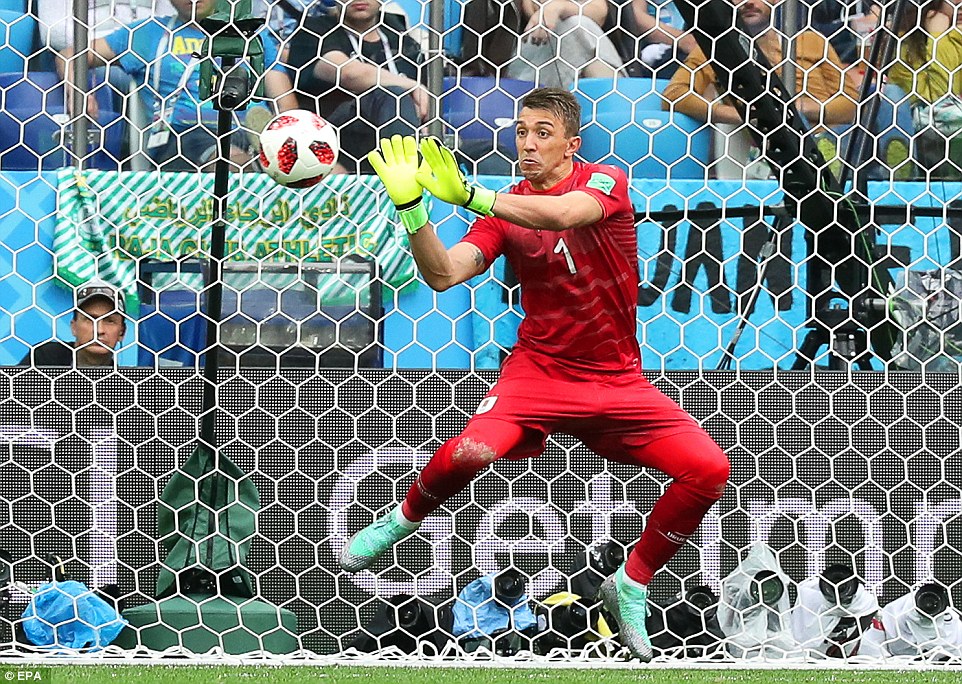 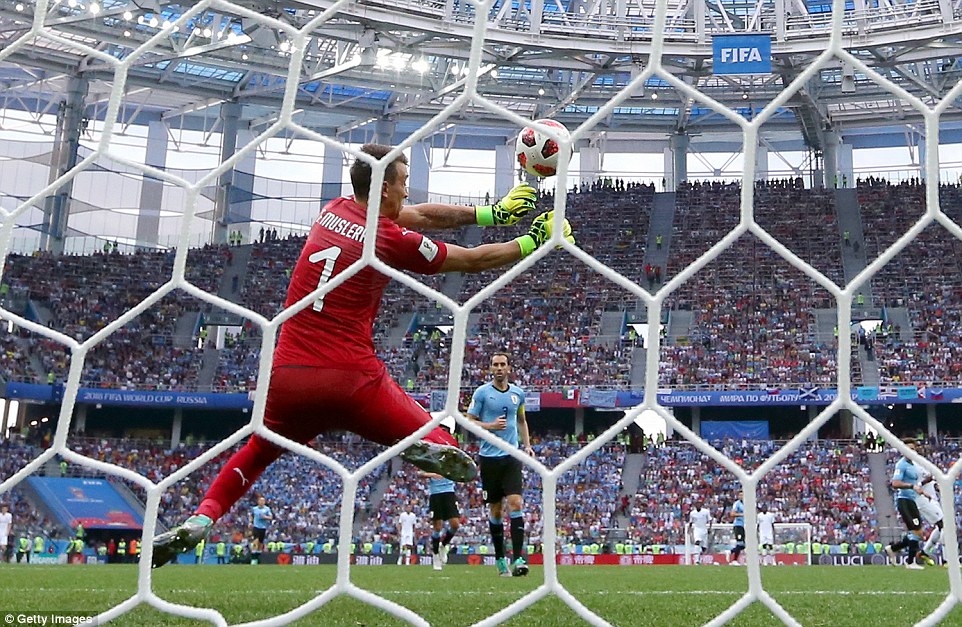 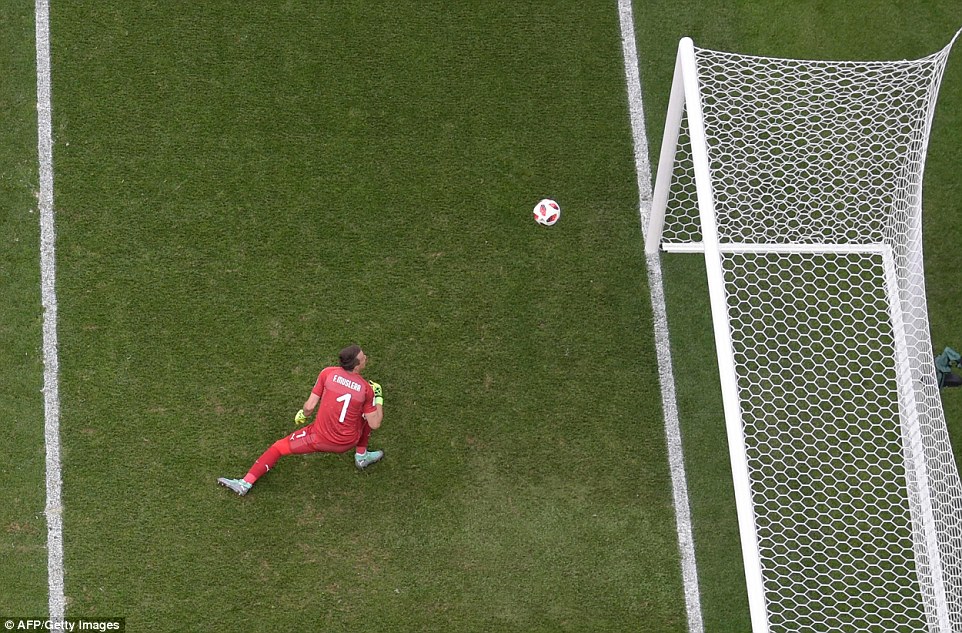 By the time Muslera had turned around to attempt to recover the calamity, it was too late with the ball over the goalline 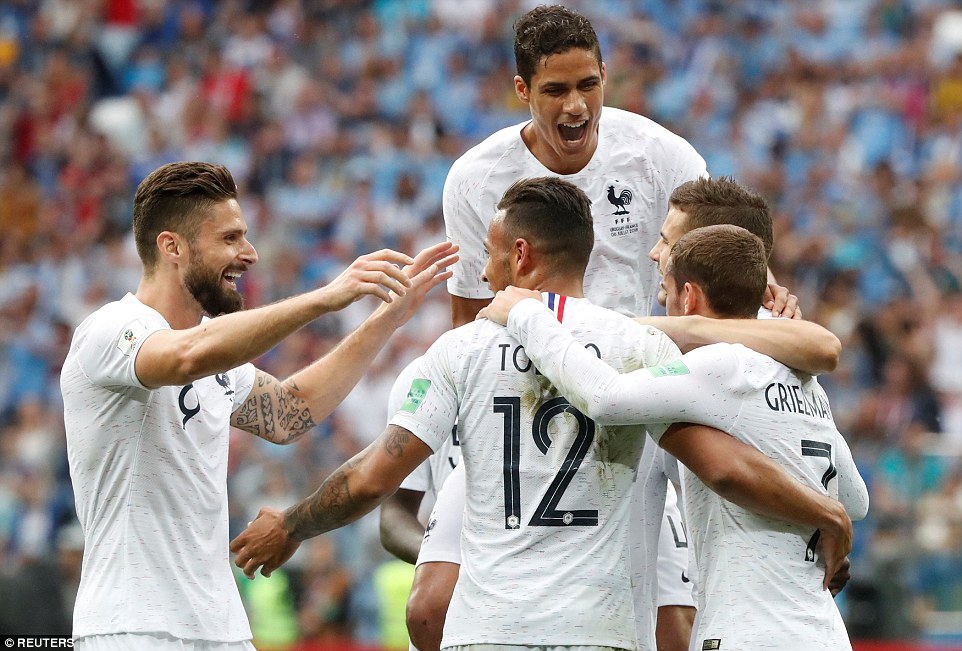 France celebrates Griezmann’s second goal on 61 minutes, which put them firmly in control of the quarter-final  showdown 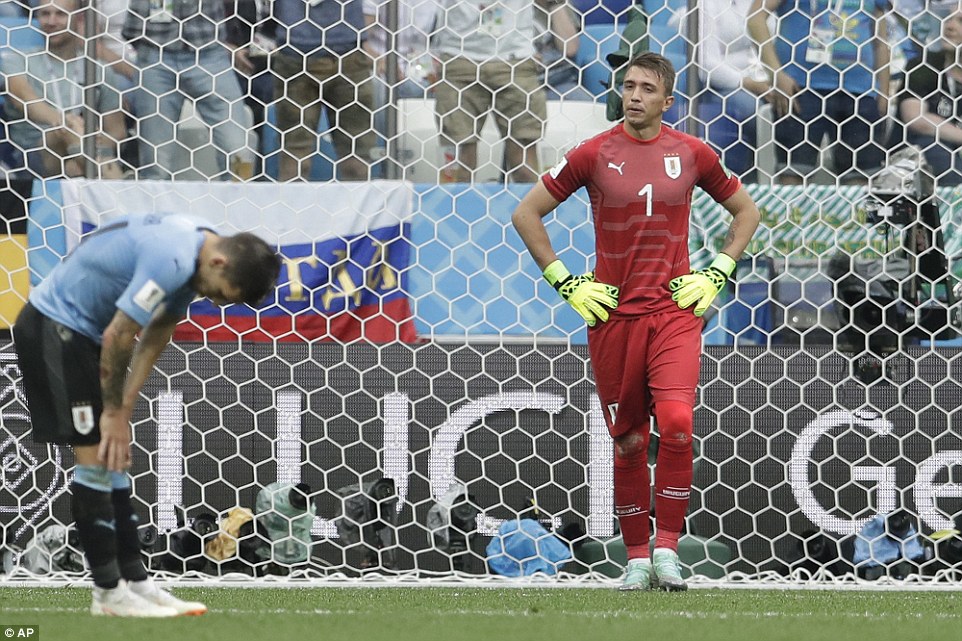 It was an horrendous moment for Muslera, who reacts with dismay after conceding a soft second goal in the quarter-final

In five previous encounters between the two countries since 2002 there had been only one goal.

Kylian Mbappe showed glimpses of his devastating turn of pace but wasted the first clear opening of the game, mistiming a header on target when unmarked in front of goal and became flustered by Uruguay’s physical attention.

Lloris saved comfortably from Matias Vecino on the turn.

France dominated possession and took the lead, five minutes before half-time when a mistake in defence by Rodrigo Bentancur allowed Tolisso to steal the ball.

Bentancur’s attempted to regain possession quickly but his tackle was clumsy and felled the French midfielder.

Referee Nestor Pitana gave a free-kick and booked the Uruguayan, a yellow card which was met with a pained expression as Bentancur knew this would rule him out of the semi-final if his team were to make it. 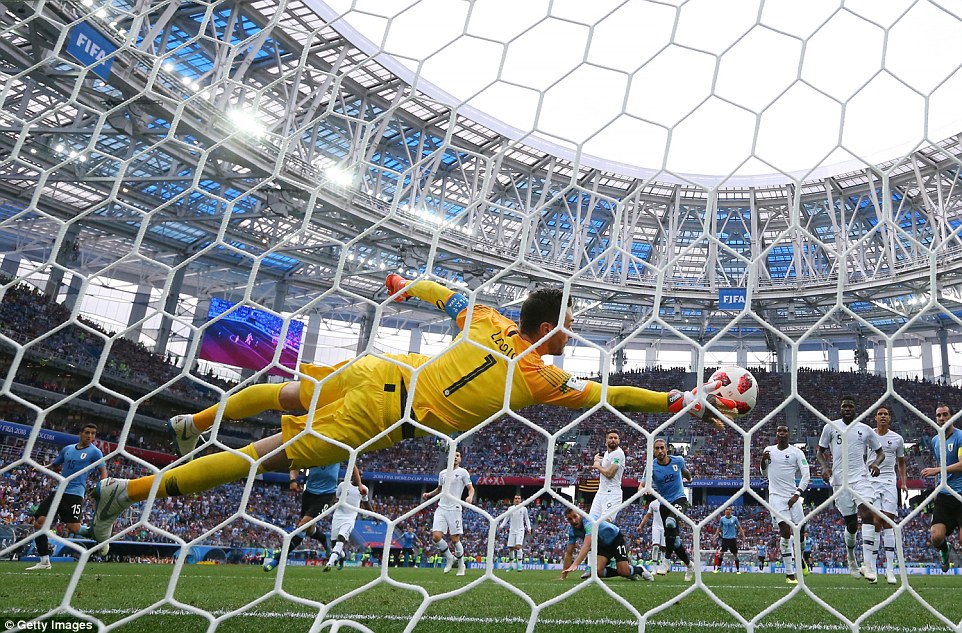 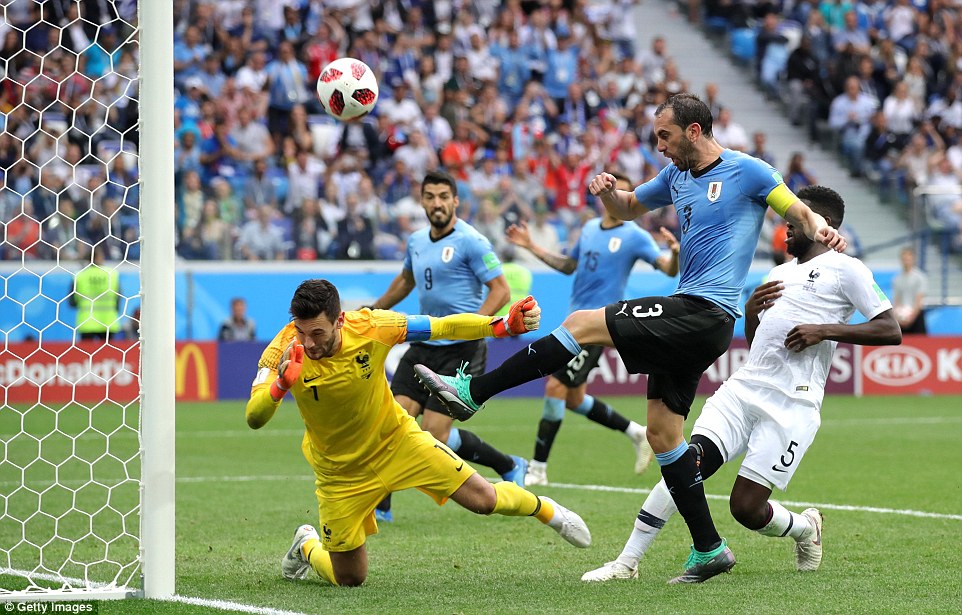 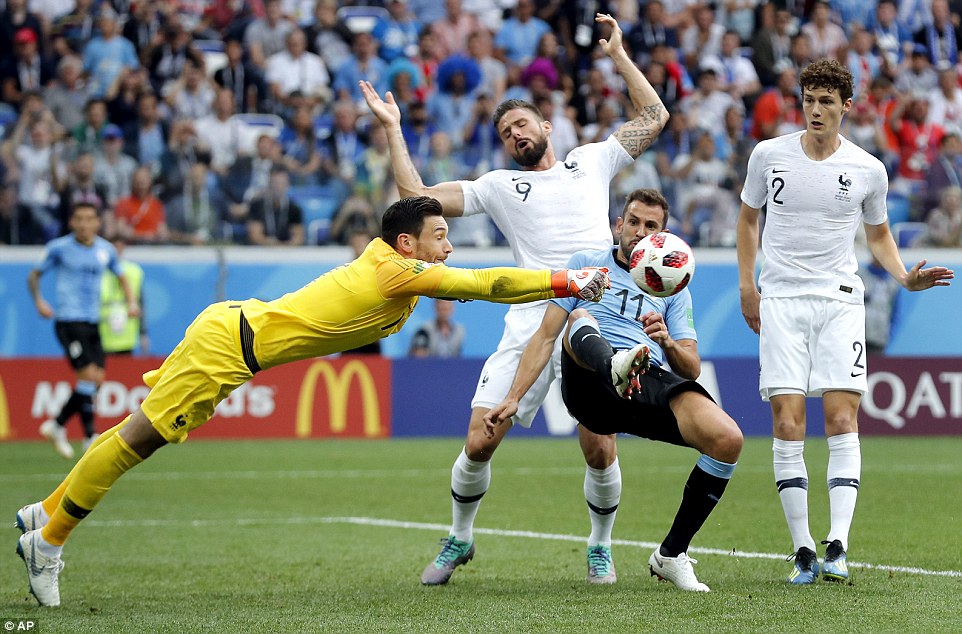 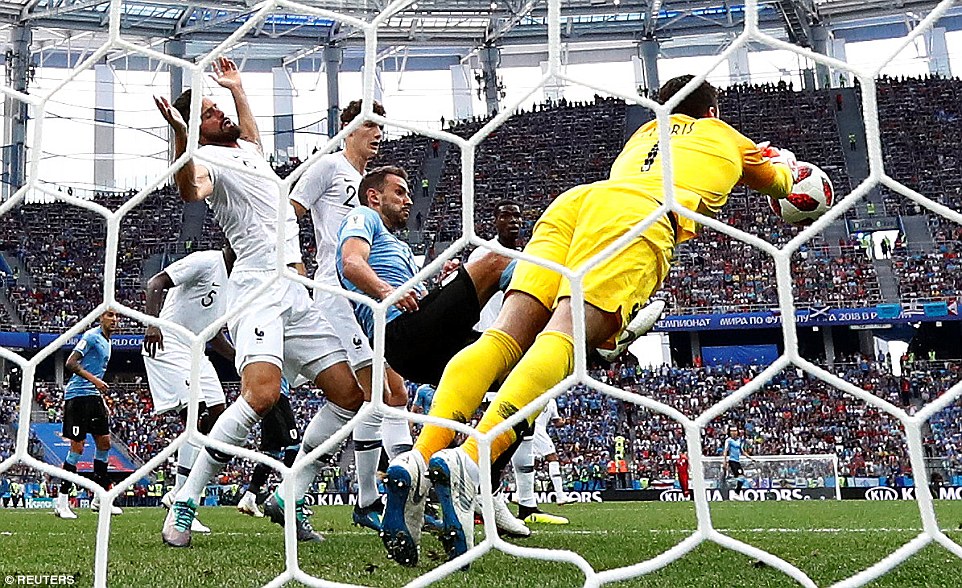 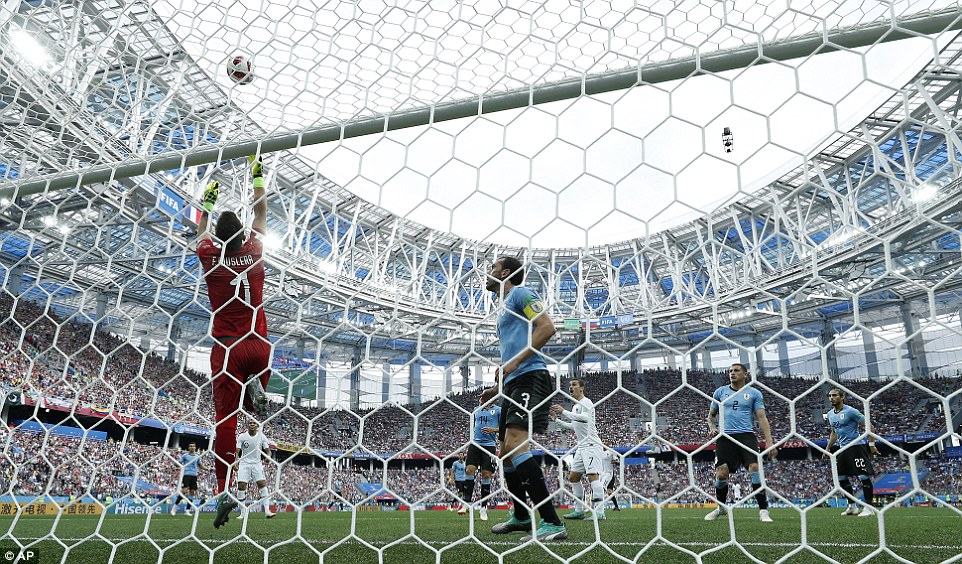 Griezmann addressed the free-kick and clipped it into the penalty area with his left foot.

Varane timed his run perfectly, away from Vecino and across the front of Stuani, he rose and glanced a header inside the far post at pace. Muslera had little chance with this one.

Uruguay responded with a positive flurry of intent before the interval and forced Lloris into a brilliant save.

Again from a set-piece, this time delivered by Lucas Torreira and won in the air by Martin Caceres. Lloris sprang to his right and kept the header out with a firm right hand.

Diego Godin crashed in to try and ram the rebound into the roof of the net but blazed the ball over. 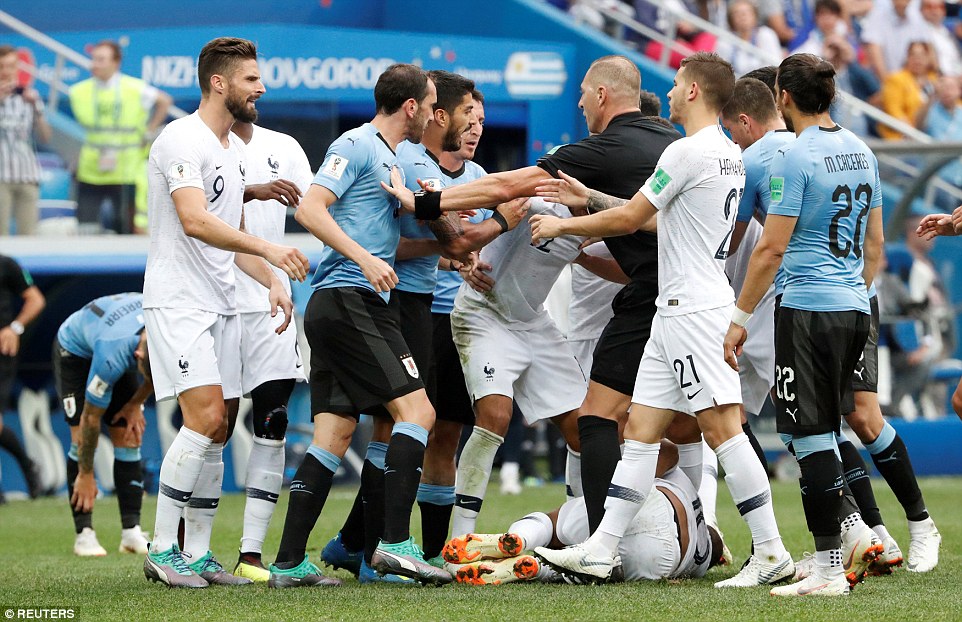 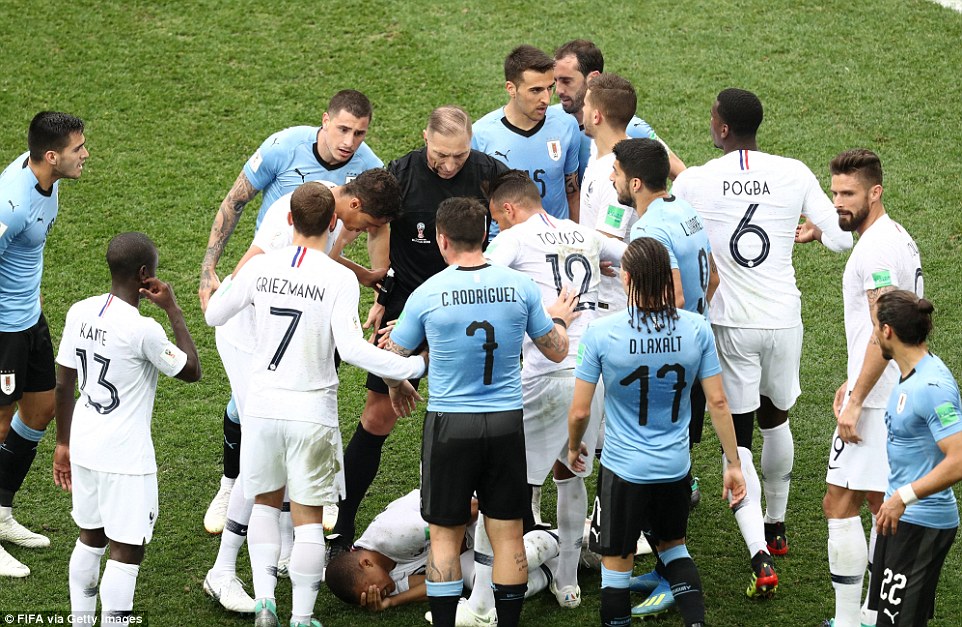 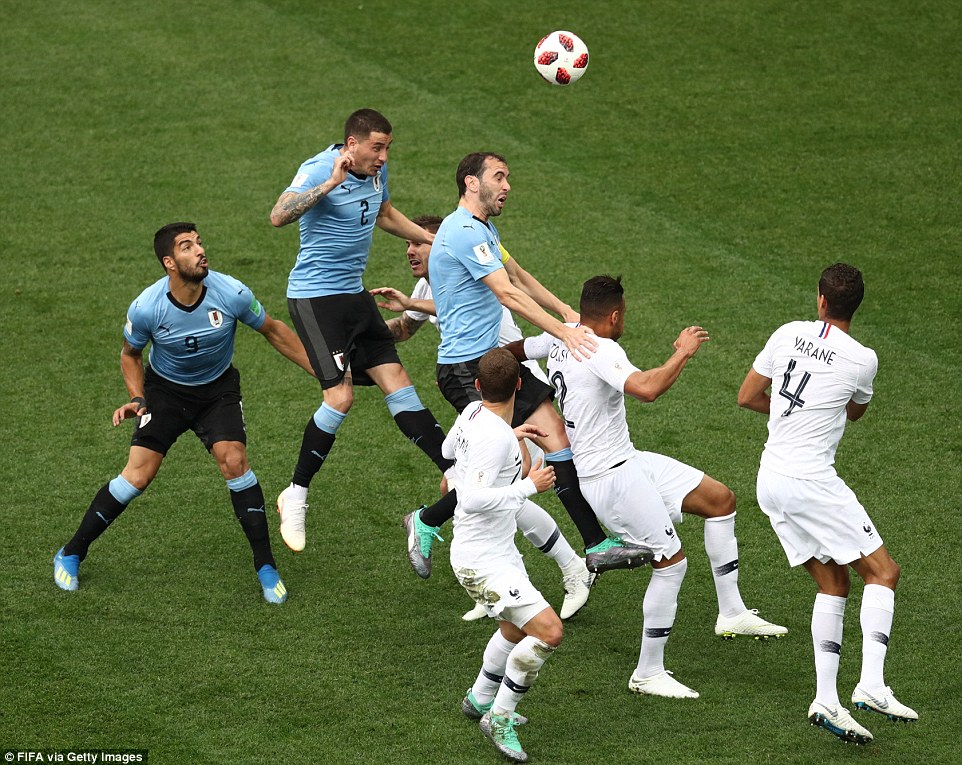 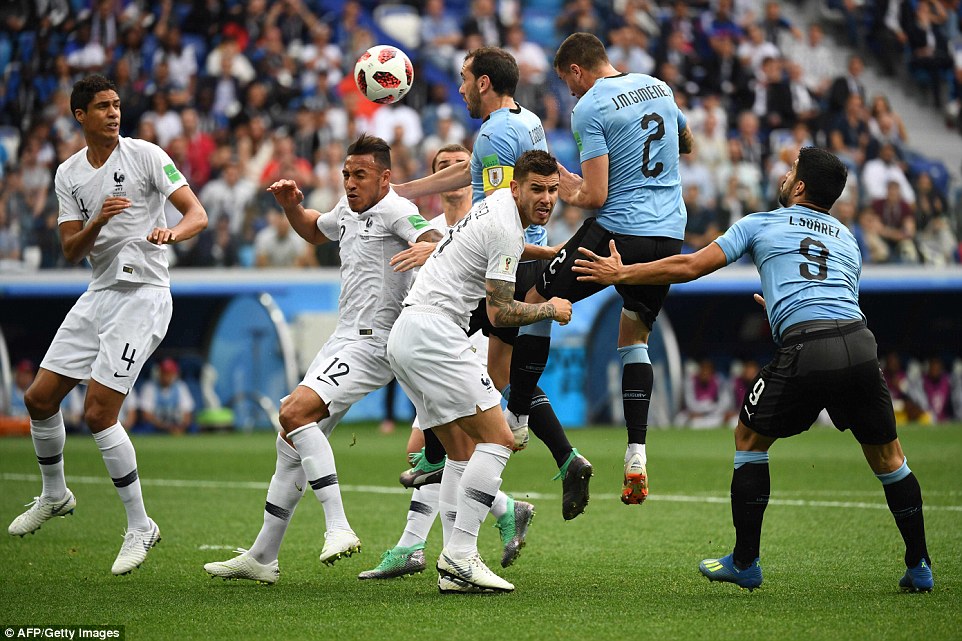 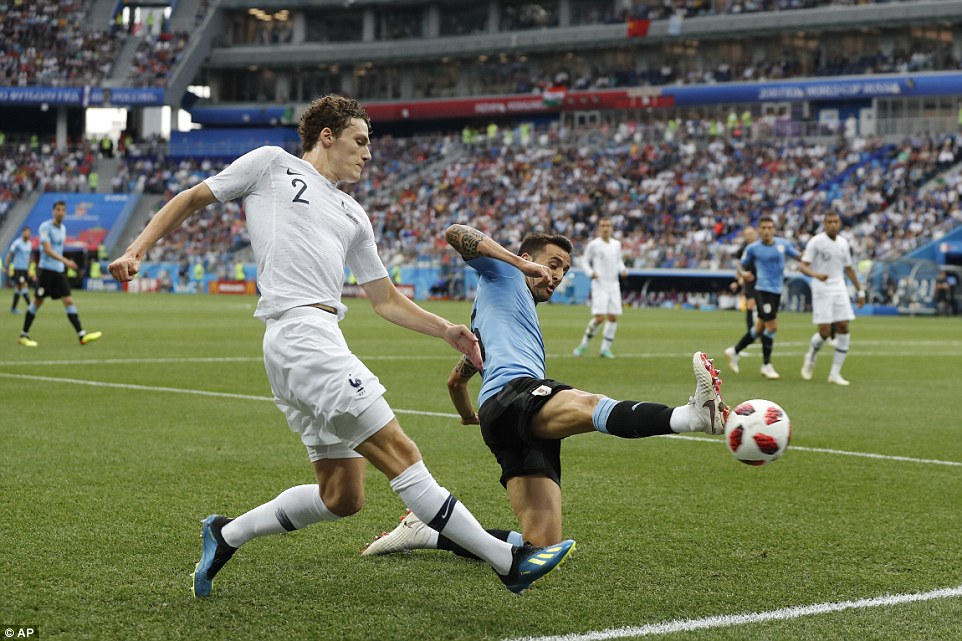 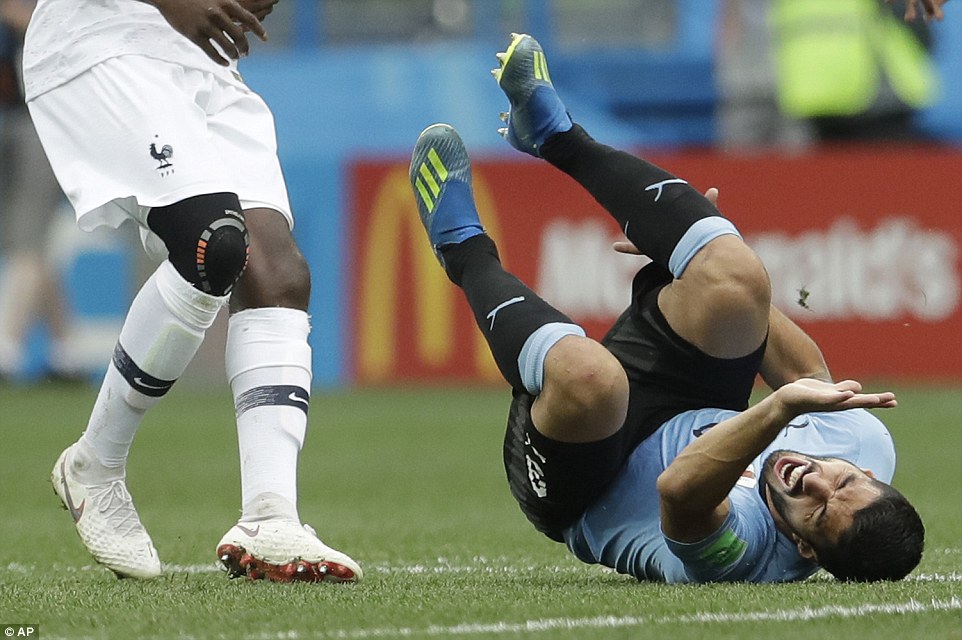 Oscar Tabarez did not wait long into the second-half to make two changes but his team were soon two adrift following a dreadful mistake by goalkeeper Muslera.

Griezmann was about 25 yards from goal, out on the left when he took a short pass from Tolisso and was given all the time and space he required to line up a strike on goal.

He struck it sweetly but straight at the goalkeeper and although there may have been a slight wobble in flight Muslera really should have kept it out.

Instead he panicked, pushed his palms at the ball and helped it into the net.

In fairness to Griezmann, he seemed to take little delight in his goal, perhaps slightly embarrassed to see it slither in as well as sorry for his Uruguayan pals. 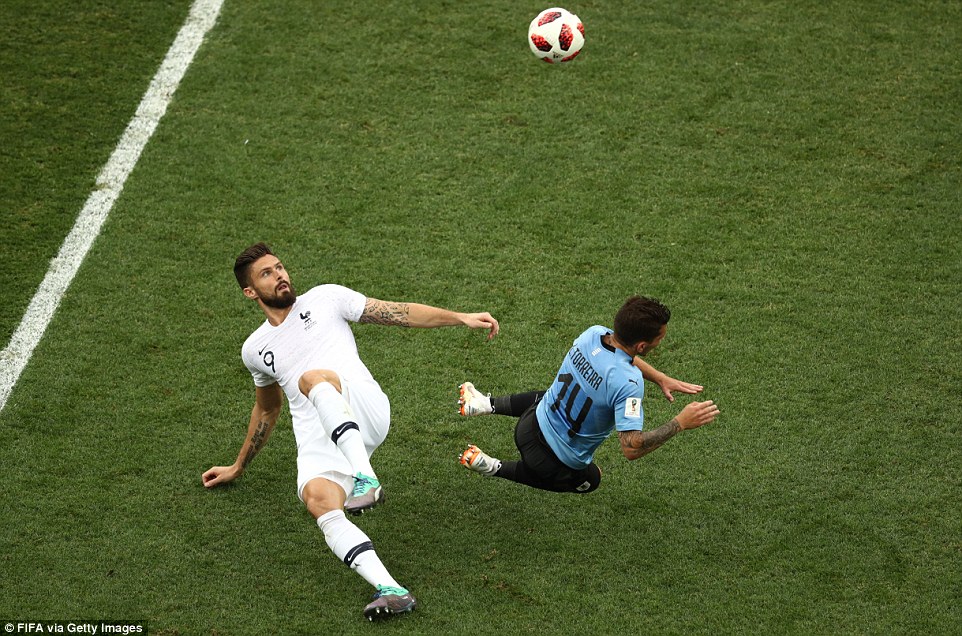 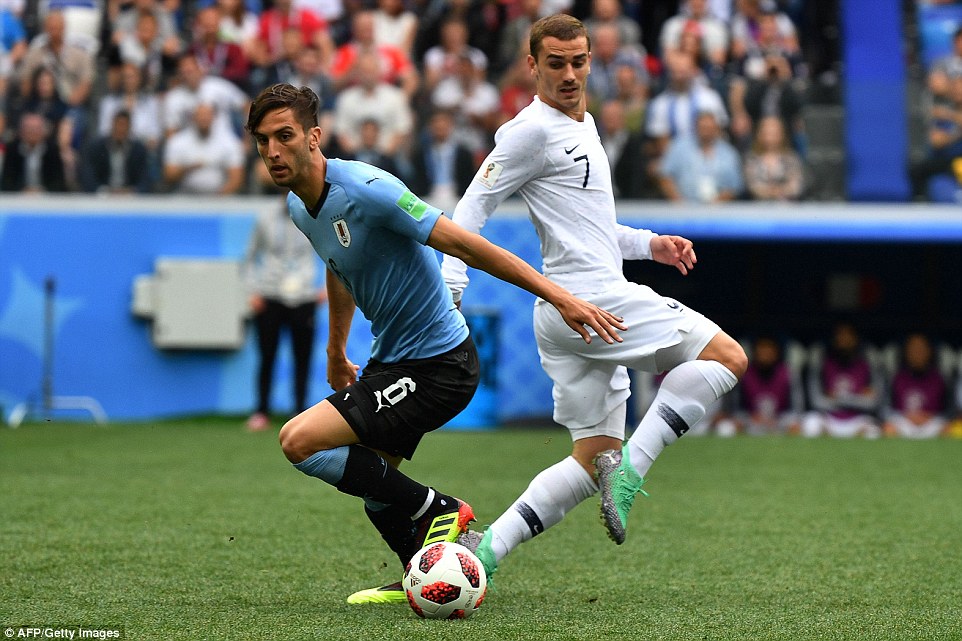 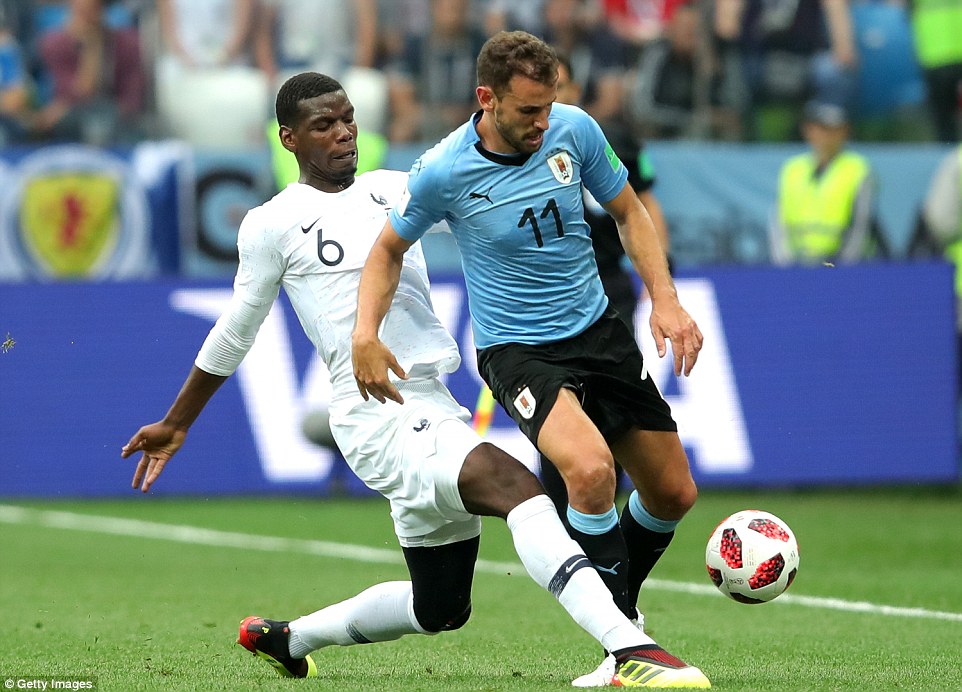 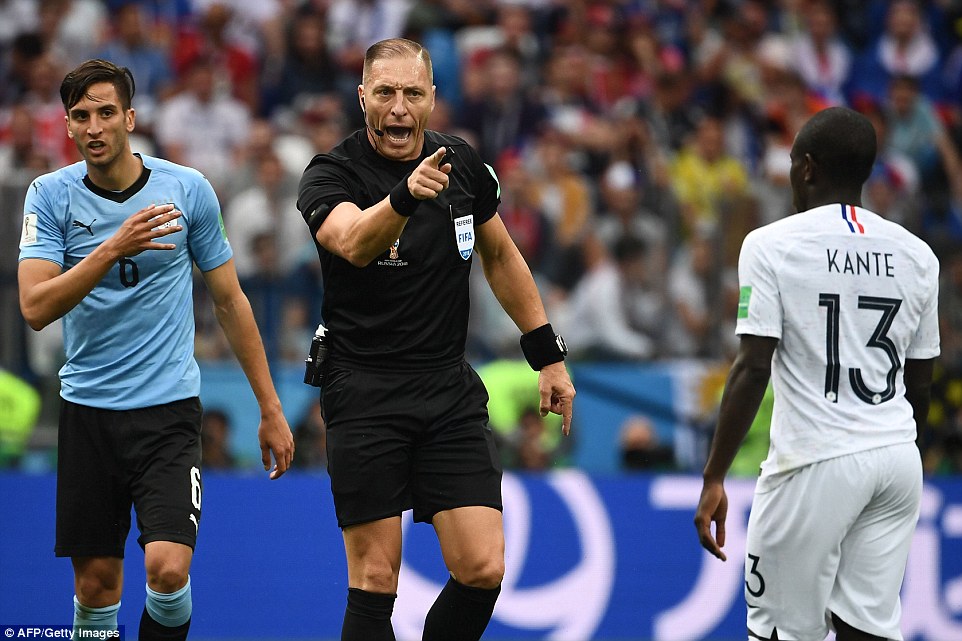 There was little goodwill extended elsewhere because from this point the niggly nature of the contest worsened, with France happy to run down the clock by milking every bit of late contact.

Nahitan Nandez left an elbow on Tolisso and Lucas Torreira was late on Benjamin Pavard.

A mass skirmish was triggered when Cristian Rodriguez nudged Mbappe and everyone waded in when the teenager overreacted.

Luis Suarez, ineffective without Cavani, was in the thick of it.

Referee Pitana settled the dispute with yellow cards for Mbappe and Rodriguez. 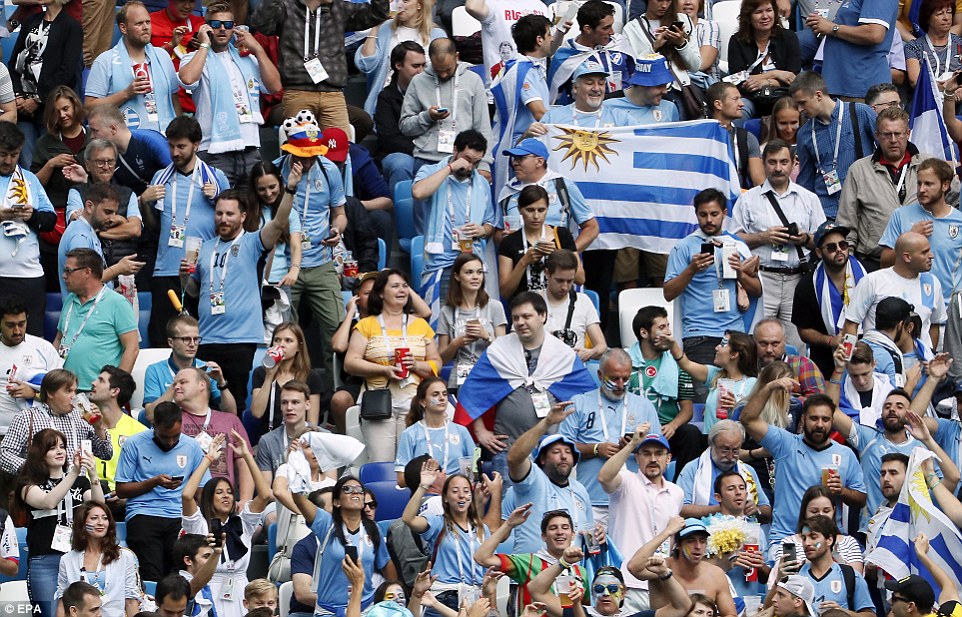 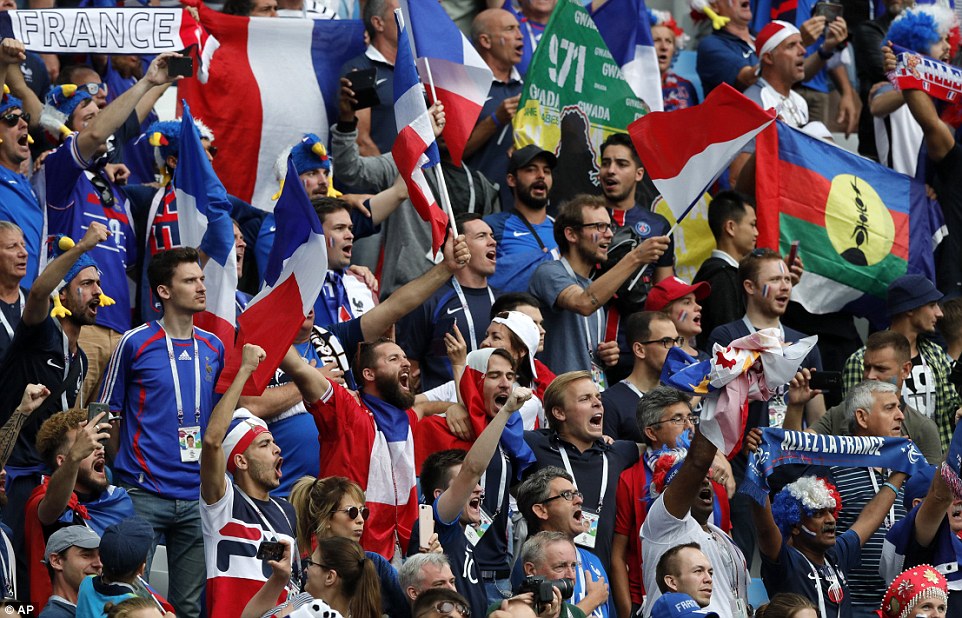