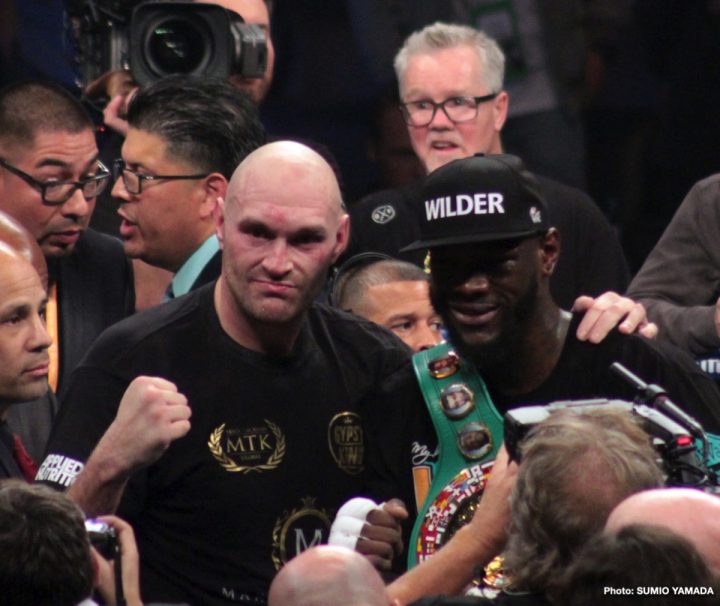 Tyson Fury doesn’t think too much of the WBC’s decision to order him to face Dillian Whyte in a WBC heavyweight title eliminator to get a shot at WBC champion Deontay Wilder.

Fury, 30, thinks it’s unfair that #1 WBC Whyte (25-1, 18 KOs) hasn’t already been given a title shot yet against Wilder, as he believes he should already have been given the fight.

What Fury fails to realize is the WBC ordered Whyte to face Luis ‘King Kong’ Ortiz in 2018 in a title eliminator to get a shot at Wilder, and instead of taking that fight, Whyte fought Joseph Parker.

As such, Whyte arguably blew his chance to become the WBC mandatory by choosing to fight Parker. Whyte fought who he wanted to fight, and that didn’t work out too well for him when the WBC chose not to make him a mandatory after he defeated Parker.

Around the same time, the IBF ordered Whyte to fight in an eliminator against Kubrat Pulev to earn the mandatory position to face IBF heavyweight champion Anthony Joshua. Once again, Whyte failed to take part in the eliminator.

In both instances, Whyte opted not to take the fights.

Rather than facing Ortiz and Pulev, Whyte fought who he wanted to fight in Lucas ‘Big Daddy’ Browne, Joseph Parker and Dereck Chisora. Whyte is currently scheduled to face #10 WBC Oscar Rivas (26-0, 18 KOs) on July 20th on Sky Box office at the O2 Arena in London, England.

Whyte’s promoter Eddie Hearn wants the WBC to make the Whyte-Rivas fight an official eliminator for a mandatory title shot against the winner of the May 18th Wilder vs. Dominic Breazeale fight.

Hearn wants the WBC to order the winner of the WIlder-Breazeale fight to face Whyte with no intervening fights.

“I ain’t being ordered to do anything by anybody. It’s very unfair the way they’re treating Whyte,” Fury said to Behind The Gloves.

It’s not surprising that Fury is rejecting the WBC’s decision to order him to fight Whyte an eliminator, because he recently pulled out of negotiations to fight a rematch against Wilder that would have taken place on May 18.

The WBC had ordered Wilder and Fury to face each other in a rematch, and yet Fury still pulled out of the fight and decided to face little known German heavyweight Tom Schwarz on June 15.

Fury is popular enough to where he doesn’t need to face Whyte in a WBC eliminator to get a rematch with Wilder.

What Fury doesn’t realize is the WBC’s decision to rank Whyte at #1 ABOVE Breazeale was a move that confused the casual boxing fans, and has led to a big mess.

The reason why it is the wrong decision for the WBC to rank Whyte at #1 is because Breazeale had ALREADY beaten Molina in an official WBC eliminator to earn the mandatory position in November 2017. The WBC should have ordered Wilder and Breazeale.

Instead, the WBC let Wilder fight Bermane Stiverne in November 2017, then Luis Ortiz in March 2018, and then finally Fury in December 2018.

Breazeale was the forgotten man.

In the meantime, Whyte was ranked #1 by the WBC, and that led a lot of the casual boxing fans to ask, ‘Why isn’t Whyte getting an ordered title shot against Wilder?’

The reason is, Breazeale was already the mandatory for Wilder, and the WBC was lagging in ordering the fight.

Secondly, Whyte FAILED to take part in the WBC’s title eliminator against Ortiz when they ordered him to face him in April 2018. It was a blow it move on Whyte’s part in not agreeing to fight Ortiz.

Breazeale (20-1, 18 KOs) has been the mandatory for Wilder since 2017 after he earned the position in defeating Eric Molina in an official WBC eliminator.

”I don’t think too much of it,”Fury said about the World Boxing Council ordering him to face Dillian Whyte in a WBC title eliminator.

”I’m the lineal champion of the world. I fight who I want, when I want, and how I want. I don’t need to fight eliminators to fight Wilder. I already have a Deontay Wilder fight,” Fury said.

It’s unfortunate that boxing lacks structure for fighters to get title shots. The popular fighters like Fury get title shots over less popular guys, and they don’t need to take part in things like title eliminators.

Once a fighter becomes popular, they don’t need to be a world champion at all period to get the big fights.

It’s too bad that Fury can basically thumb his nose at the WBC’s order for him to fight Whyte in an eliminator, and STILL get a title shot against Wilder.

If this was another sport, Fury would be out in the cold if he chose to bypass the preliminary fight against Whyte.

Boxing is more like professional wrestling than an arguably organized sport like football or basketball, which have season schedules, playoffs and championship games.

In a perfect world, Fury would be losing out on his chances for a rematch with Wilder by bypassing the WBC title eliminator against Whyte.

It’s too bad for Whyte, because he would actually get a chance to fight in an eliminator that the WBC wanted him to take part in.

Why didn’t Whyte agree to fight in a WBC title eliminator?

This is the question that you have to ask Whyte. Why didn’t Whyte agree to face Luis Ortiz in the WBC eliminator in 2018 when the World Boxing Council ordered the fight.

Does Whyte have a sense of entitlement that he should be able to circumvent the eliminators, and instead fight the guys that he wants to?

What happens to the sport of boxing when the contenders and their promoters decide who they’ll fight in eliminators rather than the sanctioning bodies?

If Whyte and his promoters are able to tell the sanctioning bodies that they’re going to fight journeyman Dereck Chisora or 40-year-old Lucas Browne, and that the WBC should make one of those fights an eliminator, what’s the point of the governing bodies being there at all?

You might as well have the fighters and their promoters making all the rules as they go along.

WHAT HAPPENS IF WBC REFUSES TO MAKE WHYTE VS. RIVAS AN ELIMINATOR?

Hearn is hoping that the WBC will agree to make Whyte’s fight against Oscar Rivas a title eliminator for their July 20th fight.

What happens if the WBC chooses not to? Rivas is a fringe contender at #10, and not ranked highly.

Again, this is another opponent that Hearn and Whyte have hand-picked and asked the WBC to make the fight an eliminator.

Instead of the WBC being the one that is picking out an opponent for Whyte to fight in an official eliminator, Hearn has already chosen the guy that they want to fight.

How does that look if Hearn is choosing who his fighter Whyte should compete against in a WBC eliminator instead of the sanctioning body?

“We’re all trying to come up with a resolution that’s fair and we haven’t yet, so we’re still pushing,” Hearn said to skysports.com.

So, what was unfair about the WBC ordering Whyte to fight Luis Ortiz? That seemed like a perfectly good choice by the WBC in ordering that fight.

Why didn’t Whyte take the fight? At this point, Ortiz likely wouldn’t agree to fight Whyte in a title eliminator, given that he’s expected to face Wilder in a rematch in either late 2019 or early 2020.

Ortiz also has a chance to fight Joshua for his IBF/WBA/WBO titles.

The WBC might need to work down the list and try ordering Adam Kownacki, Joseph Parker, Alexander Povetkin or Tony Yoka to face Whyte in a title eliminator. But for the WBC to just bend to Hearn’s wishes to make the fight between Whyte and Rivas a title eliminator to get the mandatory spot to face Wilder, it’s going to look like the WBC is being led around by their nose by Hearn.