The 29-year-old became Mexico‘s first ever heavyweight world champion by stopping Joshua inside seven rounds to capture the WBA, WBO and IBF titles.

Ruiz, who has received considerable attention since his shock win over Joshua, was the guest of honour at the Palacio Nacional on Tuesday after taking a private jet back to his native Mexico. 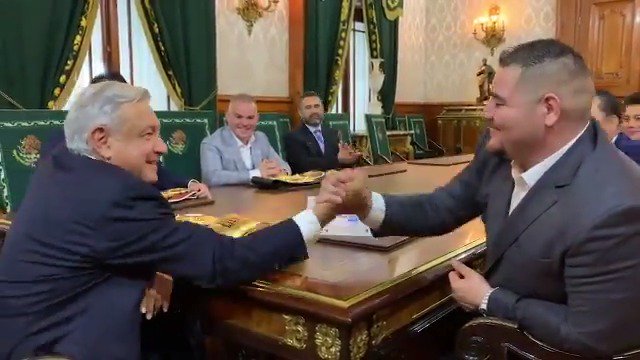 Obrador invited Ruiz and commemorated him on his achievement before presenting the heavyweight with a pair of golden gloves and a 500 Mexican Peso bill.

Ruiz was accompanied by his trainer Manny Robles, father and the WBA president Gilberto Mendoza for the special occasion.

He later posed for pictures alongside Obrador – who has been serving since last year as the 58th president of Mexico – with his WBA world title.

The heavyweight was also this week handed a new belt to add to his collection following his shock win inside Madison Square Garden two weekends ago.

Ruiz, the WBA, WBO and IBF world champion, now also possesses the Snickers heavyweight title after professing his love for the chocolate bar.

He claimed he eats one before every fight, although didn’t for his clash with Joshua because New York State Athletic Commission rules prohibit the consumption of unregulated substances in the locker room before fights.

The unified champion is currently in talks with Snickers’ parent company, Mars, about becoming the face of the snack, but his manager David A. Garcia cautioned that negotiations are just ‘semi-formal discussions’ at this point.