Gervonta could do time – Anthony Cardinale 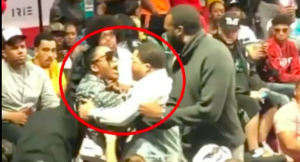 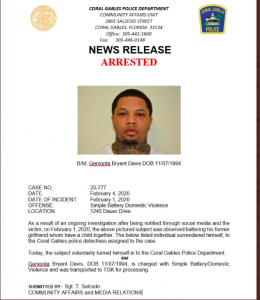 Gervonta Davis has been hit with some jabs by Johnny Law in the last few years, but the Baltimore boxer could be about to absorb stiffer punishment stemming from an incident which occurred Feb. 1 in Miami, at a celebrity basketball game.

TMZ got the scoop on the video that went viral, which showed the WBA lightweight champion went at the mother of his baby-daughter, barking at her, yanking her out of her seat at the hoops event, and marching her toward an exit in the arena at the University of Miami.

The video spurred a wicked backlash on social media, with the 25 year old Davis, owning a 23-0 (22 KOs) record fighting under the Mayweather Promotions banner, drawing scorn for acting abusively.

Another shoe dropped on Tuesday, when Coral Gables (Fla.) police put out a release announcing the pugilist had been arrested, for battery/domestic violence.

TMZ had more deets: “The report says Davis dragged the woman off the floor of the celeb game to a separate room — all while grabbing her shirt with his hand close to her throat. When they got to the backroom, cops say video shows Davis “pulling his arm back and then forward towards the victim, which is consistent with a strike to the face where the victim sustained injuries to her lip and left jaw”.

Cops say the woman cooperated with police and provided a written statement saying she was attacked by Davis. She also allowed police to take photos of her injuries,” the mega-popular gossip/news site reported.

Fans of the fighter, who last fought on Dec. 28, when he stopped out past his prime Yuriorkis Gamboa (age 38) in round 12 of a title defence taking place in Atlanta, and screening on Showtime, are wondering how this case will play out.

One long-time fight fan who has a history in the legal system sphere noted to me that often-times, a complainant who has a close relationship to someone charged with battery will back off their statements or initial testimony to authorities.

That person noted the phrasing from TMZ, specifically “which is consistent with a strike to the face” might mean that video doesn’t show without a shadow of doubt that Davis struck Dretta Star.

If the video evidence isn’t that strong, that could leave room for a suspended sentence, maybe a fine, a mandatory donation to a battered women’s organization and perhaps community service. That is conjecture, of course.

I reached out to the highly regarded attorney Anthony Cardinale (below), a NYC-born and bred criminal defence mastermind, who happens to be a boxing lifer to boot.

Cardinale comes from a fight family. His dad Frankie was one of six boys, and four of them boxed.

The counselor’s pop, Frankie Cardinal, was a .500 welterweight in the 40s who made up for his lack of pop (4 KOs in 43 pro outings) with his chin and admirable stubbornness. After fighting, he had a restaurant, Delsomma, a solid Italian joint, well above .500, Sinatra dug it, in NYC.

Tony played football at Wilkes University in PA., went to law school at Suffolk in Boston and then worked for F. Lee Bailey, the most famous attorney in the world, save for Perry Mason, in the 1970s.

He got back to boxing when he repped some local pugs who bounced at The Rat, in Kenmore Square, Boston, near Fenway Park.

The bouncers had gotten maybe too rowdy in trying to eject some college boys who didn’t want to adhere to the call for closing time. 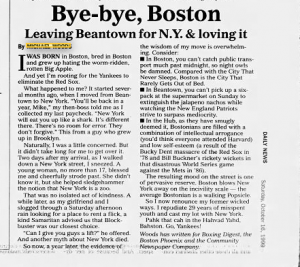 The justice-crusaders at the Rat trained at a gym in Southie, Jimmy Connolly’s place he ran with his brother Bill, and the attorney went there to touch base with the clients.

Boxing poked at him, as it does with so many lifers – it gets in the blood, and like a dormant virus, can go dark, then pop up, demand attention.

Boxing has a rich history of being a free-fly zone where angels and devils weave in and out of each others’ airspace;

they influence each other, provide proximity and opportunity to shrug off shackles of devious intent and walk on the bright side of the street … or step over the line from rules-follower to rogue operator who decides that the most successful gangsters are elected politicians and CEOs of multi-billion dollar corporations.

That variety of character and characters can be intoxicatingly interesting, because, apart from church, you just don’t often see such a variety pack of personalities intermingling.

Cardinale more often found himself dispensing intelligent advice and dogged defences for folks like “Fat” Tony Salerno, who was named by Fortune Magazine as No. 1 in their ″The 50 Biggest Mafia Bosses” ranking in 1986.

Cardinale relocated to Florida a few years back, but is remembered as a sometimes feisty advocate on behalf of his clients, like John Gotti, and trial-watchers recall the Beantown defender being quite willing to speak truth to power to a judge who maybe seemed to tip overtly to the side of the state.

At the 1992 trial in Brooklyn which saw the “Teflon/Dapper Don” John Gotti facing a life sentence for murder and racketeering, Cardinale took issue with the judge’s refusal to allow an acoustical engineer to verify that the defence’s transcripts of some taped dialogue were accurate:

“You’re telling me I can’t even do that, judge?” Cardinale said.

“I can’t understand it, and I’m sorry if I’m losing my temper,” the attorney, Frankie’s sometimes pugnacious son said, or, rather, shouted. 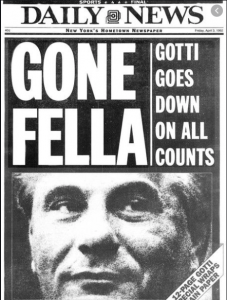 Another high-profile client was Gennaro “Jerry” Angiulo, tabbed by the Boston Globe as “underboss of the New England mafia, who ruled the Boston rackets from the 60s into the 80s”.

As feds yanked him from Francesco’s Restaurant in the North End in 1983, he yelled, “I’ll be back before my pork chops get cold”.

Angiulo would have had a better chance at finishing those chops if Cardinale were able to share knowledge that the FBI’s case against Angiulo was bolstered by a beyond-iffy source.

“Whitey” Bulger started working as an informant for the FBI in 1975, and in 1997 it was revealed, by Cardinale, the extent to which the South Boston gangster manipulated the “good guys” in a manner which benefitted him.

Bulger helped the FBI bug Angiulo and company in 1980, and Whitey, it was reported, scooped up some business interests Angiulo dropped when he went to prison.

Yes, it could be argued that some not unreasonable doubt could have been introduced by Cardinale when defending Angiulo.

Cardinale gave Bulger some payback when he got the government to freeze $800,000 found when the gangster/rat was caught in Cali, in 2011, after being on the lam since December 1994.

Cardinale got a judgement for the family of a man Bulger threatened into signing over his liquor store, at gunpoint.

You get the point; Cardinale is a guy who is like a fighter who wins fights with ring generalship.

That boxer can rightfully be called a pugilist, that practitioner uses angles masterfully, and understands better than 99% of the masses what a foe is likely to do next.

They pick up on subtleties and nuance, their in ring vision is special. That’s been Cardinale, in his main vocational arena …

So, counselor, what might we expect to see in the progression of the Gervonta Davis basketball game case?

Cardinale pondered, and said he wanted to ask around, pick the brains of Florida barristers who know how the region might handle such a case.

He did so, and circled back to me. “It depends on whether if Gervonta is charged with a misdemeanour or a felony,” Cardinale said.

“If it’s a felony and he has any prior charges, and is found guilty or pleads, it is likely he would do some time.

“Domestic battery, what he was arrested for, is classified as a first degree misdemeanour, with penalties that may include up to one year in jail or twelve months probation, and a $1,000 fine.

“Due to the ‘domestic’ nature of the crime, the accused will face additional mandatory penalties under Chapter 741, Florida Statutes,” Cardinale shared.

– Completion of a 26-week batterer’s intervention programme (BIP)
– 12 months of probation
– 5 days required jail (if the defendant is adjudicated guilty and there is bodily injury)
– Additional community service hours
– Loss of important civil liberties, including concealed carry rights
– Imposition of an injunction or ‘no contact’ order

Gervonta Davis has had run-ins before, but if, as appears, a prior assault charge was settled out of court, that may not be a prior which would activate a penalty, for the basketball incident, that includes incarceration, Cardinale continued.

And now, I asked Cardinale, to take off the lawyer cap. Please, I said, speak more so as a person who has seen lots of cycles, and eras, and is astute as hell when it comes to assessing behaviour. OK, especially misbehaviour … and seeing over the horizon line into the future of the person who has battled their own instincts and then feels the sting of the unexpected counter punch.

“What I see in situations like this one is young men coming from extremely hard circumstances who’ve been given celebrity status and what seems to them to be a fortune,” Cardinale said.

“However, with that celebrity and fortune comes a lot of added baggage, including everyone from family members to hangers-on who are there just to bask in the reflected glory and share in the fortune.

“But what they really need is support from people in and out of boxing who truly care for them and want them to succeed, not just in boxing, but in life.

“Looking at the video of this incident is a case study – Gervonta approaches the woman with two people who seem to be ‘friends’ but who instead of steering him away, act as his backup.”

Or is this age worse, because we see so much narcissistic signalling and performative behaviour going on, to get hits and likes and constant fishing for hits of adoration? 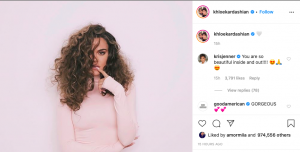 Does all that positioning oneself to get buzz on social media, with that distance between those furnishing the ego stroking and the recipient insulating the object of fascination, f*** up a guy like Gervonta faster and harder than might have been the case in the 70s, 80s, 90s?

“Given his undoubted boxing talent and age, Gervonta has a great future which, unfortunately, can be destroyed in a moment of anger or foolishness,” Cardinale said.

“The combination of celebrity and money have always been a minefield in the sport, so it’s really nothing new.

“What’s different is that it’s coming much sooner today, and therefore it is harder to navigate.”