Pierre-Emerick Aubameyang has admitted his pride at sharing the Golden Boot with Liverpool’s Sadio Mané and Mohamed Salah and insisted their success is evidence that African players are thriving in the Premier League.

The Arsenal forward’s two goals against Burnley on the final day ensured he ended the season on 22, matching the tally of Senegal’s Mané and Egypt’s Salah, who also became the sixth player to win the award in successive seasons.

It was the most prolific campaign for African players in England’s top-flight, surpassing the 2006/7 season when Chelsea’s Didier Drogba finished as the top scorer with 20 goals and Blackburn’s Benni McCarthy came second with 18.

But while Aubameyang will not be in action in Egypt this summer along with Mané and Salah following Gabon’s failure to qualify for the Africa Cup of Nations, the 29-year-old believes their club achievements are “a good sign for the continent”. 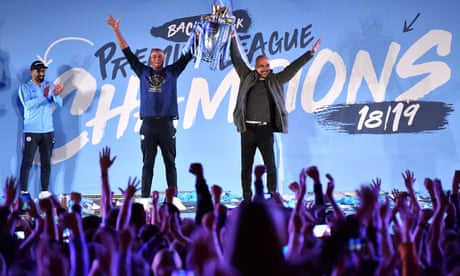 “It means a lot,” he said. “I am really happy and proud of it. I am sharing this trophy with Mané and Salah. I like these two guys. We are representing Africa, so it is a good sign for the continent. I am really proud and I have to thank my team-mates for helping me to get it.”

The news that Aubameyang, who also picked up the top scorer award in the 2016/17 Bundesliga season, had earned a share of the prize came as a surprise to Jürgen Klopp. The Liverpool manager worked with him for two seasons at Borussia Dortmund after he signed from Saint-Étienne in 2013.

“Auba too? Do they have three boots?” he asked after Liverpool’s win over Wolves at Anfield in which Mané scored both goals. “It is good. They are all my players.”

Liverpool must now recover from the disappointment of missing out on a first league title since 1990 to Manchester City before the Champions League final against Tottenham on 1 June.

Arsenal meanwhile have to prepare for the showdown with Chelsea in the Europa League final three days earlier.

Having also scored a hat-trick in the second leg of the semi-final against Valencia last week, Aubameyang admitted he would prefer to not to have such a long break given his recent form.

Yet despite having scored 10 goals in 13 league appearances last season following his £56m move from Dortmund in January 2018, he acknowledged it had taken time to settle in his new surroundings.

“It is always a tough battle when you play a game here in England and you have to be ready physically. That’s the most important change when I came here from Germany,” he said.

“It took a little bit of time [to settle]. I had six months to adjust to this league. I think I did well in the first six months and now I have the whole season. I am happy with that. Hopefully I will do better next season.”