Gennadiy Golovkin admits he thought he’d be in for a short, easy night when he sent Sergiy Derevyanchenko to the canvas with just over a minute to go in the first round of their middleweight title fight.

Golovkin had no idea then that he was about to engage in the most grueling fight of his celebrated career. A determined Derevyanchenko and a gritty Golovkin spent the next 11-plus rounds ravaging each other in an unbelievably brutal battle boxing fans won’t soon forget.

Virtually every time Golovkin drilled Derevyanchenko with a punishing punch, the Ukrainian underdog fired back with a strong shot of his own. Both boxers exhibited iron chins and ridiculous resilience in BoxingScene.com’s 2019 “Fight of the Year” by withstanding countless flush punches as they brutalized each other throughout their spectacular slugfest October 5 at Madison Square Garden in New York.

“I wanna say just thank you so much to my opponent,” Golovkin told DAZN’s Chris Mannix during a post-fight interview. “[He did] a great job. I respect his team. I told you, he’s a very tough guy.

Derevyanchenko didn’t just overcome a first-round knockdown, a setback Derevyanchenko argued was caused by a right hand to the back of his head. Golovkin (40-1-1, 35 KOs) later opened a cut over Derevyanchenko’s right eye by landing a left hook in the second round of a main event DAZN streamed.

That terrible cut limited Derevyanchenko’s vision for the final 10-plus rounds, but it didn’t prevent the courageous contender from producing an epic effort against one of the most ferocious finishers of this generation.

“It really was like a Gatti-Ward fight, at an incredibly high skill level,” DiBella said. “But I will always believe I knew who won, and it wasn’t Triple-G.” 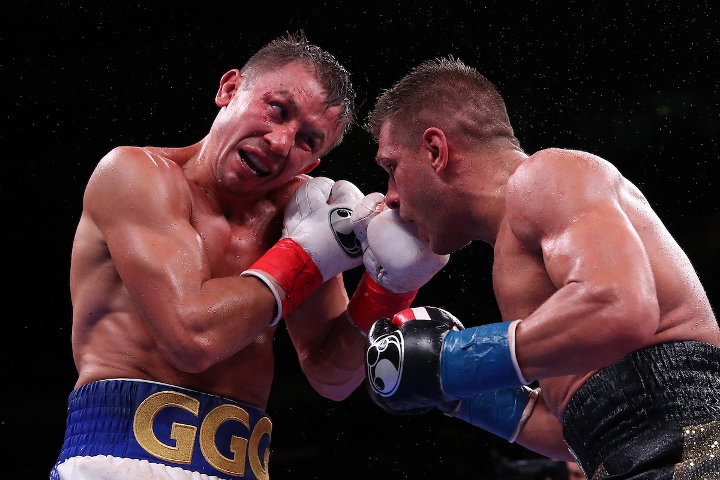 Below are the runners-up for BoxingScene.com’s 2019 “Fight of the Year” award, listed chronologically.

Daniel Roman-TJ Doheny (DAZN): The relentless Roman rarely stopped throwing punches in this memorable battle, but Doheny displayed a huge heart by withstanding two knockdowns and Roman’s persistent pressure. A battered, bloodied Doheny backed up Roman at times in the second half of a fight in which he survived knockdowns in the second and 11th rounds. Los Angeles’ Roman (27-2-1, 10 KOs) won a majority decision over the Irish-born Doheny (22-1, 16 KOs) to retain his WBA 122-pound championship and win the IBF belt from Doheny on April 26 at The Forum in Inglewood, California.

Julian Williams-Jarrett Hurd (FOX): Williams out-boxed Hurd when they fought from a distance. When they went at it inside, Williams out-muscled the bigger, supposedly stronger Hurd and took all of Hurd’s hardest shots. Philadelphia’s Williams (27-1-1, 16 KOs, 1 NC) almost immediately showed that this wouldn’t be the former champion’s night, when he dropped Hurd during the second round of their 12-round fight for Hurd’s IBF, IBO and WBA 154-pound titles. Williams won a unanimous decision May 11 at EagleBank Arena in Fairfax, Virginia, near Hurd’s hometown of Accokeek, Maryland. Williams’ win was one of the biggest upsets of 2019, too, as Hurd (23-1, 16 KOs) was a 6-1 favorite.

Jose Ramirez-Maurice Hooker (DAZN): This was the only bout considered for “Fight of the Year” that didn’t go all 12 rounds. There was more than enough back-and-forth action in these five-plus rounds, though, to warrant its inclusion among the runners-up. Ramirez and Hooker hammered away at one another with hard head and body shots, until a left hook up top by Ramirez hurt Hooker badly just after the halfway point of the sixth round July 28 at College Park Center in Arlington, Texas. Ramirez immediately unloaded a flurry of power punches on a vulnerable Hooker (27-1-3, 18 KOs), which made referee Mark Nelson step between them to stop their junior welterweight title unification fight at 1:48 of the sixth round. Ramirez (25-0, 17 KOs), who defended his WBC 140-pound title and won the WBO belt from Dallas’ Hooker, was ahead on two scorecards when their fight ended (49-45, 48-46, 47-47).

Errol Spence Jr.-Shawn Porter (FOX Sports PPV): Support for Spence-Porter as “Fight of the Year” lasted all of a week because Golovkin-Derevyanchenko took place the following Saturday. Their tremendous welterweight title unification match still was one of the best action fights of 2019. Porter more than held his own against the heavily favored Spence, who was pushed unlike he had been tested in any of his first 25 professional fights. Spence dropped Porter with a short, left hook in the 11th round, but the resilient Porter (30-3-1, 17 KOs) got up and continued competing with one of the sport’s elite talents right up until the final bell. Spence (26-0, 21 KOs), of DeSoto, Texas, won a split decision, retained his IBF 147-pound championship and took Porter’s WBC belt September 28 at Staples Center in Los Angeles.

Naoya Inoue-Nonito Donaire (DAZN): Inoue defeated Donaire decisively on two scorecards (117-109, 116-111), but Donaire rocked the unbeaten Japanese sensation with a right hand in the ninth round of a thoroughly entertaining 12-rounder November 7 at Saitama Super Arena in Saitama, Japan. The hard-hitting Inoue (19-0, 16 KOs) eventually made Donaire (40-6, 26 KOs) take a knee when he landed a left to his body during the 11th round. Though he clearly lost, Donaire tested Inoue unlike any previous opponent and remained dangerous right up until the final bell in their fun fight for the IBF and WBA “super” 118-pound crowns. Judge Robert Hoyle scored Inoue a 114-113 winner, which means the 11th-round knockdown was the only thing that prevented Inoue from winning a majority decision in the final of the World Boxing Super Series’ bantamweight tournament.