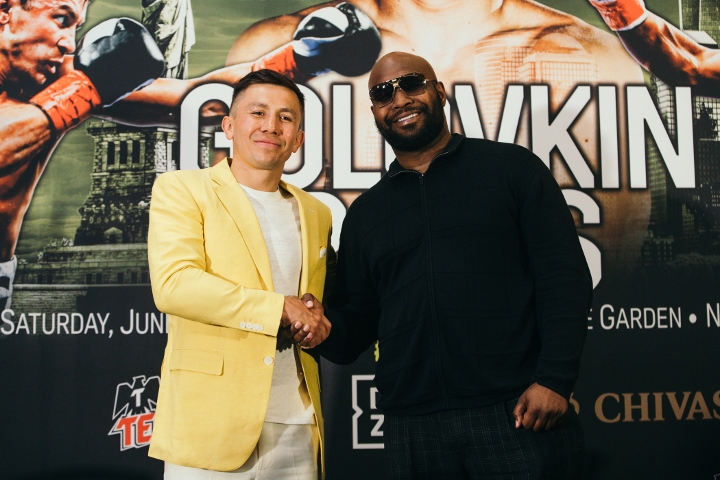 Gennady Golovkin has never been the disagreeable sort but he seemed to be particularly content before an open workout Tuesday afternoon at the Churchill Boxing Club, a few-hour drive from his training camp in Big Bear.

New platform on which to fight, DAZN (a six-fight deal for a reported $100 million). New trainer, Jonathan Banks. New beginning. Triple-G is a happy man these days.

“I just feel very comfortable,” he said to a group of reporters in a small room above the gym.

“I have strong people who stay with me, who just believe in me, and I believe in (them).

The person to whom Golovkin was referring when he used the word “fake” was Abel Sanchez, his longtime and now-former trainer. The two reportedly split over money – Surprise! Surprise! – but Triple-G also accused Sanchez of being ingenuine.

“Abel at first said he feels like dad and son and the second time he said it’s only business. C’mon,” Golovkin said.

That led to a new partnership with Banks, the former trainer of Wladimir Klitschko who learned the ropes under the late Emanuel Steward at the Kronk Gym in Detroit. They’ve been training for five weeks for Golovkin’s fight against unbeaten, but relative unknown Steve Rolls on June 8 in New York City.

Golovkin is almost giddy about his work with Banks in Big Bear, the mountain town in which he used to train with Sanchez.

He was asked to describe the difference in working with his former and current trainers. He chuckled and said, “a lot.”

Of course, one shouldn’t expect a significant transformation given his age (37) and success. At the same time, he discovered he can still learn new tricks.

He said he and Banks have been working on his quickness – “at my age, you know, you lose a little speed,” he said – and his technique, which Golovkin has embraced.

He said we should expect “more boxing, more strategy.”

“Jonathan doesn’t (teach) Abel’s stuff, he brings his own stuff, different stuff from Detroit, from that school,” Golovkin said.

“He brings a lot of boxing. It’s different. I feel like a teenager going to a new school.”

“OK, boxing is jab, hook, uppercut. The three punches, that’s it. If you want to learn more, (you need a) new school. This is new.”

Golovkin (38-1-1, 34 knockouts) is like the rest of us: He doesn’t know much about Rolls (19-0, 10 KOs), an untested 35-year-old out of Toronto who presumably was selected so Triple-G can ease into his six-fight deal with DAZN. They agreed to a 164-pound catch weight for the bout.

The legitimate opponent on Golovkin’s radar is more familiar, middleweight titleholder Canelo Alvarez, who also fights on DAZN. That obviously is one reason Golovkin chose the streaming service over other platforms; it sets up a third fight with his arch rival, who enjoys a 1-0-1 advantage in their two meetings.

Golovkin said he’s “absolutely sure” it will happen, perhaps in September. And this time, he promised, he won’t end up on the wrong side of another controversial decision.

“For me, it’s important to finish (the series) in the right way,” he said.

Beyond that? Golovkin doesn’t know. He feels he has limited control over who he fights. For example, he’d love to regain a middleweight title and then unify the belts but, as he put it, “it’s very difficult to force people to box with me.”

He talked about possibly moving up to 168 pounds or even 175 for the right opportunity but he wants to take things a step at a time.

“Let’s do the first fight and maybe do the Canelo fight and then we’ll consider everything,” he said.

One thing seems certain: He’ll enjoy the journey, wherever it takes him, more than he has in the past.