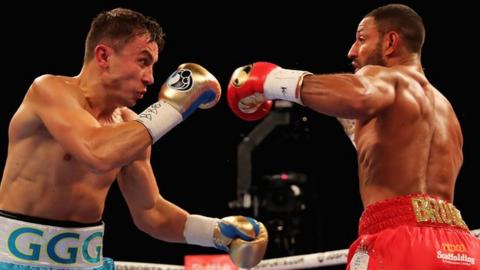 Kell Brook’s audacious bid to dethrone middleweight king Gennady Golovkin came to nothing as the Briton was stopped in the fifth round at London’s O2.

He showed tremendous bravery and got plenty of shots through the Kazakh’s defences, but was finally ground down.

And with shots raining down on Brook in the fifth round, his trainer Dominic Ingle threw in the towel.

It was Brook’s first defeat in his 37th professional fight, while the undefeated Golovkin now has 33 knockouts from 36 fights, including 23 in a row.

He was taken to hospital as a precaution after revealing he suffered a broken eye socket in the second round and had blurred vision.

“I was frustrating him. I was starting to settle into it but when you see three, four, five of them it’s difficult,” he said.

Golovkin backed Ingle’s decision, saying: “I think he’s smart, I respect his corner. Seriously, the last round he couldn’t breathe or move.”

Only a select few boxers have successfully jumped straight from welterweight to land a middleweight world title, the last being Emile Griffith in 1966.

As such the 30-year-old Brook, despite his recent struggles to make the 147lb welterweight limit, was a huge underdog against a man who had 375 amateur contests, had never fought lower than 160lb and never been off his feet.

Golovkin came out with evil intentions, snapping Brook’s head back with a couple of ramrod jabs before staggering the challenger with a couple of hurtful left hooks. However, Brook recovered well and was firing back at the end of the opening round.

Golovkin continued to stalk Brook relentlessly in the second but the challenger finished the round with the upper hand, firing left hooks and uppercuts through his rival’s tight guard and working the 18,000 fans into a tremendous lather.

Brook’s right eye began to close in the third but he still managed to get through with some solid combinations, the speed of which seemed to befuddle the champion.

And it was more of the same in the fourth, Golovkin marching Brook down but having to take plenty of shots in order to get off his own.

But the fifth was a more one-sided affair which started badly for Brook and escalated quickly. And with the Englishman taking shot after shot while reeling on the ropes and blood spraying everywhere, Ingle decided he had seen enough.

Canadian referee Marlon Wright initially failed to see Ingle waving the white towel but called a halt to proceedings as soon as he did. And while Brook looked dismayed at the decision, Ingle was completely justified.

Despite the outcome, Brook can be tremendously proud of his display against one of the most avoided boxers in the world and a man who has laid waste to the middleweight division since winning his first world title in 2010. 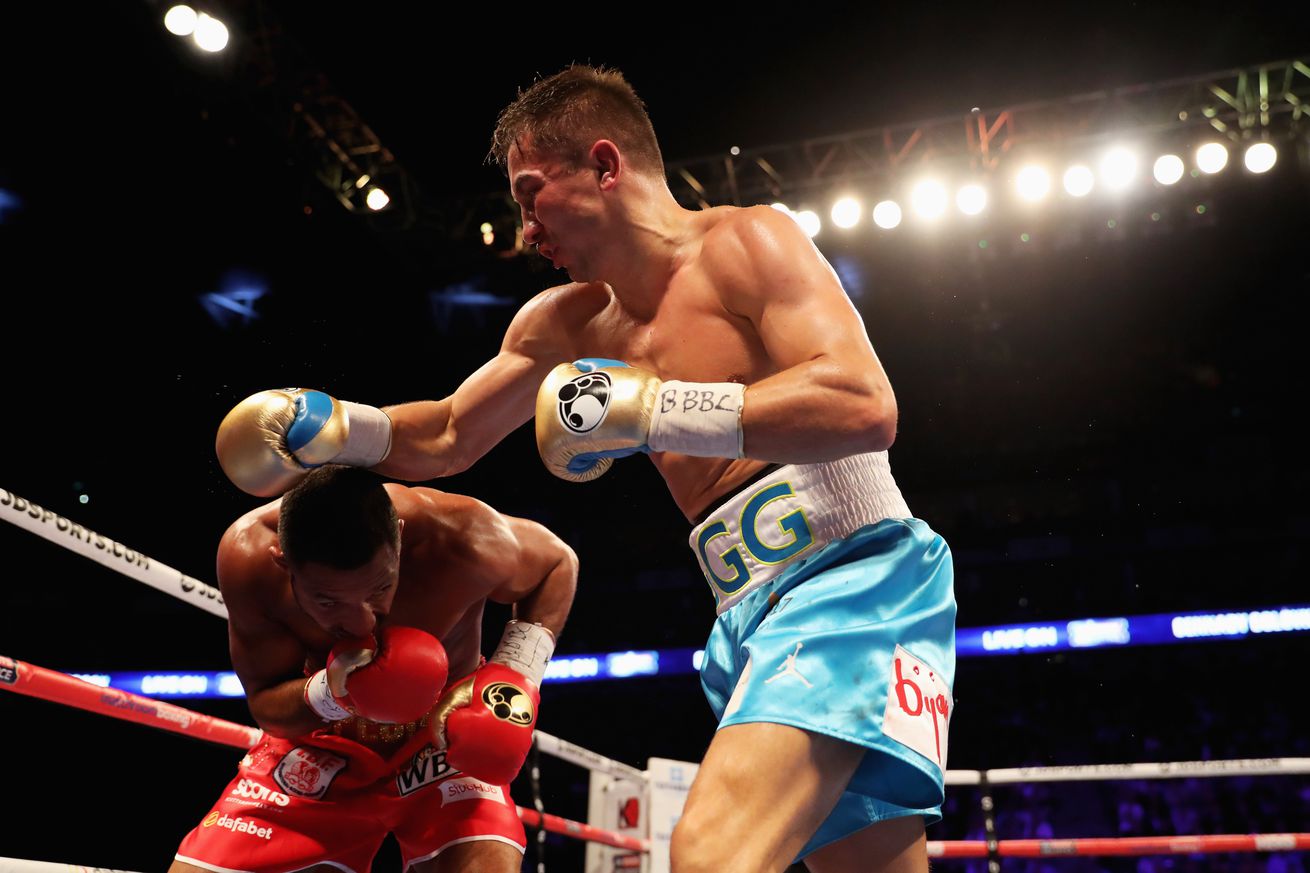 Gennady Golovkin got a game Kell Brook out, and now wants to win the last belt he doesn’t have.

In victory, Golovkin, cemented his reputation as one of the most destructive middleweights in history, especially in the final round, when his punches bouncing off the challenger’s body sounded like the beating of a bass drum.

Brook still has plenty of options. If he chooses to drop back down to 147lb, the obvious fight would be the IBF’s mandatory challenger Errol Spence Jr.

However, Brook might decide his future lies at 154lb instead. If Liverpool’s Liam Smith successfully defends his WBO light-middleweight title against Mexico’s Saul Alvarez in Texas next Saturday, Smith-Brook would make sense.

If Alvarez wins, he might finally fight Golovkin. Having defended the WBC middleweight belt against Amir Khan in May (Khan also attempted to jump straight from welterweight to middleweight but was knocked out in six rounds), Alvarez vacated the title rather than face Golovkin, to widespread criticism.

Virgin Islander Griffith dethroned Nigeria’s Dick Tiger in his first fight at 160lb. Sugar Ray Leonard emerged from a three-year retirement to upset middleweight great Marvin Hagler in 1987. But Leonard, despite making his name at 147lb, had previously won a world title at light-middleweight.