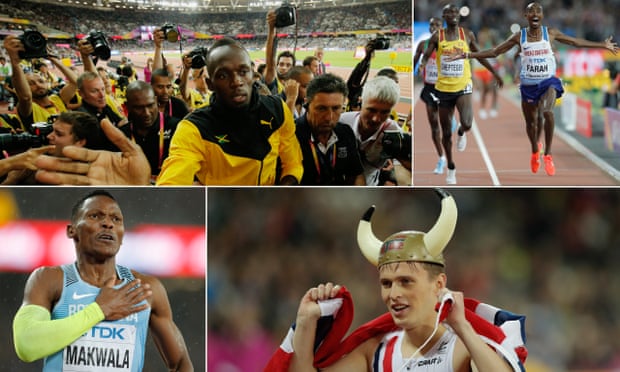 Usain Bolt. Judging by the outpouring of love and affection he received it probably has to be him but the achievements of Wayde van Niekerk should not be overlooked. Niekerk came within 0.03sec of a 200m and 400m double despite clearly being exhausted after six punishing races. Hero the Mascot deserves an honourable mention too for keeping the crowd gasping and laughing during quieter moments. Sean Ingle

Usain Bolt. Even in defeat, the Jamaican was the man London 2017 organisers were using to sell the final remaining tickets for Sunday evening by reminding the crowd he would be completing a farewell lap of honour. Martha Kelner 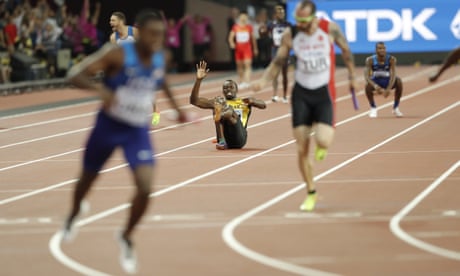 Drama and controversy at the World Athletics Championships – a photo essay

Usain Bolt. Who else? Bolt compared his last race to Muhammad Ali’s final defeat to Trevor Berbick in 1981. It would have been a preposterous remark if it had been made by anyone else. Andy Bull

Usain Bolt. There is only one athlete who could end London 2017 with a disappointing bronze medal and a heartbreaking DNF, yet still be the star of the show. Lawrence Ostlere

Karsten Warholm. The 21-year-old Norwegian stunned himself more than anyone by winning 400m hurdles gold … and then turned up to the press conference in a viking helmet. But Yulimar Rojas, the brilliant Venezuelan 21-year-old triple jumper, who ended Caterine Ibarguen’s quest to become the event’s first three-time champion after an epic duel in the sand, was another who had a breakthrough competition. SI 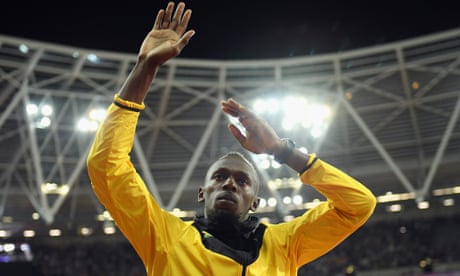 Karsten Warholm. The Norwegian is only 21 and a former decathlete but he led from gun to tape in the 400m hurdles with one of the most commanding victories of the week. His scream at the end was sensational, too. MK

Karsten Warholm. His winning time in the 400m hurdles may have been the slowest since 1991, but he’s just 21, and has been specialising in the event for only three years. AB

Karsten Warholm. The Norwegian emphatically vindicated his switch from the decathlon to specialise in the 400m hurdles, winning the world title and plenty of fans with his endearing reaction. LO

Mo Farah. It’s hard to argue with him, given he won Britain’s only two individual medals of the championships. However, that was expected. Dina Asher-Smith returning from a broken foot to come fourth in the 200m and then win a silver medal in the 4x100m relay certainly wasn’t. Especially as she started running again only in June. SI

Mo Farah. He has carried the British squad since the world championships in 2009 and did so again as the only individual medallist. His 10,000m gold was arguably his hardest fought so far. MK

Mo Farah. Given no one else won an individual medal, the competition is not stiff. It’s a great shame he still thinks that attacking the press is the best way to respond to questions about his career. AB

Mo Farah. There were several impressive performances but only one athlete brought home an individual gold medal, and he did it in typically convincing style. LO

Best is the wrong word, but probably the most thrilling moment came in the men’s 4x100m. As the batons changed hands for the final time, the USA and Britain were fighting it out for gold with Usain Bolt an outsider in his last ever race. As the crowd wondered whether the Jamaican might produce a fairytale finish he dramatically pulled up with cramp before collapsing on to the track, leaving Britain’s Nethaneel Mitchell-Blake to pip Christian Coleman for the gold.SI

Great Britain’s 4x100m gold because after years of bungled baton changes and tension behind the scenes they finally got it wonderfully, exhilaratingly right. The unconfined celebrations, where they were joined by the overjoyed women’s 4×100 team, were magnificent. It was a perfect example of talent maximisation, a team greater than the sum of its parts. MK

Sally Pearson’s victory in the 100m hurdles was particularly good to watch, especially given that she missed the Olympics last year because she tore a hamstring. It was a great race too, in which she had to overhaul Kendra Harrison and then hold off Dawn Harper-Nelson. Pearson’s first remarks? “That was bloody hard.” AB

Having just won silver themselves, the British women’s 4x100m quartet inadvertently created another memorable moment as they watched their male team-mates from trackside. Standing beside their American conquerors, they screamed GB’s men around the London Stadium before bursting into manic celebration as Nethaneel Mitchell-Blake brought home gold. LO

The conspiracy theories. On the track, they came when Shaunae Miller-Uibo clipped her calf just 10 strides from the line when cruising to victory in the women’s 400m and again when Bolt was injured in the 4x100m. The crazy suggestion the pair might be trying to avoid drug tests. Given they both won other medals in the championships, this was clearly nonsense. Off the track, it was also rubbish that the IAAF were deliberately stopping Isaac Makwala running in the men’s 400m to give their golden boy Wayde van Niekerk an easy path to a gold medal. Still, some believed it. SI

The IAAF’s handling of the Isaac Makwala incident. Not because it was incorrect to ban him from the 400m final and refuse him entry to the stadium but because of its news management. Reasoning was not relayed to the Botswana team, the crowd in the stadium or the media, and it resulted in an uninformed mess. MK

The men’s 100m final. We’ve heard a lot of worthy remarks about why it’s wrong to boo Justin Gatlin. If he had ever publicly come clean about what went on when he was working with his old coach Trevor Graham, or the cockamamie story he told when he failed his second drug test, I’d have more sympathy. AB 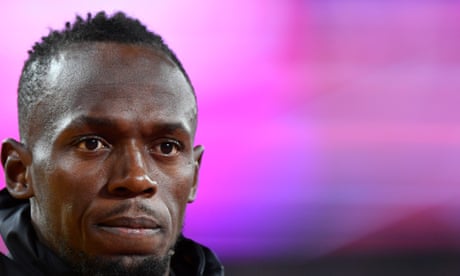 There were several reminders of the dangers inherent in athletics, none more so than Deborah John’s horrific head-first crash into the fifth barrier of her 100m hurdles heat. No serious damage was done, but the image of John lying face down and motionless on the track was a harrowing one. LO

Realise that a world championships in Qatar would be terrible for the sport. Why? Well, the stadiums will be half-empty. And the event will take place in late September or early October due to the heat, which means the athletes will be tired so late in the year and it will struggle to get a look-in during the football and NFL seasons. Given the serious questions about how Doha won the bid, the IAAF could yet be justified in taking it to another city – Berlin, Paris, heck even London again. SI

It is an age-old problem with athletics but, too often, the crowd in the stadium does not know what is going on or where to look. A textbook example was on the second Saturday night when Mo Farah’s 5,000m was under way while two British women battling for medals in the high jump went largely ignored. What a waste.MK

Invite an independent authority to take a close look at the IAAF’s decision to hold the next world championships in Doha; stop telling the athletes that the onus is on them to replace Usain Bolt by becoming “more colourful”; stop telling everyone else that everything is rosy just because they sold a lot of tickets in London. AB

Boldly innovate the sport as a spectacle. Seb Coe has banged the drum for brave new ideas and now the IAAF must ride the wave from London 2017 and deliver. Bringing fringe field events front and centre in their final throes, like the climax to the women’s high jump final, would harness a swath of untapped entertainment. LO