Ta Lou was close to taking gold medal as they approached the line but Tori Bowie of the US produced a spectacular lean to grab victory, edging the Ivorian sprinter by 0.01. Ta Lou equalled her personal best with 10.86, set last year in another dramatic final at the Olympic Games in Rio where she finished fourth, sharing the same time with bronze medallist Shelly-Ann Fraser-Pryce.Ta Lou beamed a big smile after the race, although she narrowly missed the chance to become the first African sprinter to win a gold medal at the IAAF World Championships.

“It’s a dream come true,” she said. “I didn’t see Tori Bowie when I crossed the finish line. It was a crazy feeling. I am just happy to have this medal. I didn’t expect to be in the top three because all the girls have the power and the talent to make the podium. After every competition I get stronger.” 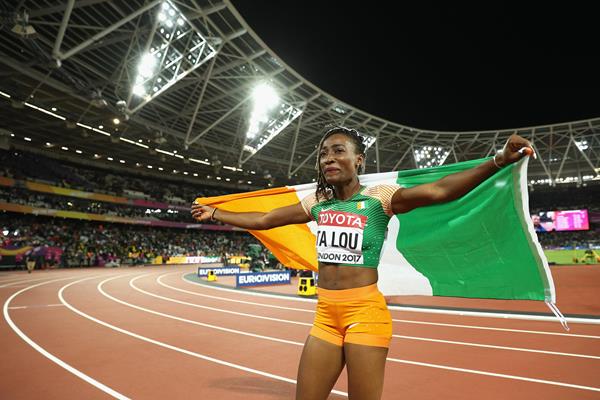 Ta Lou started her journey in the world of sport as a football player, playing at school in Koumassi, a suburb of Abidjan, the economic capital of Ivory Coast. There she caught the attention of a women’s football team that tried to enroll her. Marie Josee is a keen fan of English football team Chelsea and her famous compatriot Didier Drogba, who played for the London club at the famous Stamford Bridge for many years.

“My older brother did not want me to carry on with football, fearing that I would become a tomboy. Some friends of my brother spotted my sprint talent when I regularly beat boys over 60 and 80-metre races and I was invited to join an athletics club,” recalls Ta Lou.

During her final year of High School Florence Olonade, a classmate of Marie Josee’s mother and a former Ivorian 100m sprint champion in 1988 invited Ta Lou for a trial. Without preparation and barefoot, Ta Lou beat all the girls, athletes who had done specific training for sprints before. This is how Marie Josee started her journey in the world of athletics in 2007.

At first her mother, who worked as as a secretary and raised her four children on her own, did not want her daughter to become an athlete, because she feared that there was uncertainty in sport and encouraged her to carry on her studies and become a doctor. In 2010 the Ivory Coast Federation offered her a four-year sports scholarship to pursue studies in China. She flew to Shanghai University with her sprint teammate Wilfried Koffi, who became Ivorian 100m and 200m sprint champion in 2014.

“After graduating from high school, I started studying medicine at the University to fulfil my mother’s wish but at the end of the 2013 season I could not balance studies and sport,” said Ta Lou. “I had difficulties to pass some of my exams and faced the risk of losing the scholarship. My results at the 2012 African Championships had made me realise that I had the potential to become a elite sprinter, but things did not work for me. I could not stay in China any longer and I decided to return to Ivory Coast.”

With the help of her first two coaches Ta Lou tried to get enrolled at one of the West African IAAF High Performance Training Centres in Lome and Dakar. She was on a waiting list but a place became available after an athlete decided not to go to Dakar where former IAAF Member Services Department Director and now Italian National Team Technical Director Elio Locatelli worked for many years. Head coach Anthony Koffi suggested Marie Josee should be chosen as a replacement. Koffi became Ta Lou’s coach.

She continued her progress in 2014 when she finished third in the 100m in 11.20 behind Blessing Okagbare and Murielle Ahoure and second in the 200m behind Ahoure at the African Championships in Marrakesh. Ta Lou was picked for the African team at the IAAF Continental Cup in Marrakesh where she finished fourth in the 100m and fifth in the 200m. Following her good 2014 season Ta Lou was awarded an Olympic solidarity scholarship to prepare for the 2016 Olympic Games in Rio de Janeiro. Her new agent Federico Rosa opened her the doors to compete in the Diamond League circuit more regularly and this contributed to her further progress on the international stage.

Ta Lou narrowly missed the final at the 2015 IAAF World Championships in Beijing after clocking a wind-assisted 10.95 in the heats behind Shelly-Ann Fraser-Pryce. The Ivorian star went on to clock 22.56 in the 200m narrowly missing the final by just 0.03. She then scored a 100m-200m double at the All-Africa Games in Brazzavillle, clocking a personal best of 11.02 over the shorter distance and 22.57 over the half-lap event into a headwind of 1.1m/s.

Ta Lou made her breakthrough at the 2016 London Diamond League, where she clocked 10.96 in the heats and in the final to clinch her first win on the top-level circuit. In the final she sprang a surprise by beating Michelle Lee-Ahye and Shelly-Ann Fraser-Pryce.

“I did not know who had won and then I saw Fraser-Pryce coming to congratulate me. I had never thought I would beat her on the track one day,” said Ta Lou.

The Jamaican “Pocket Rocket” avenged this defeat by narrowly beating Ta Lou in the 100m Olympic final in Rio by 0.007. The Ivorian sprinter also finished fourth in the 200m, breaking Murielle Ahoure’s national record by 0.03 with 22.21. Missing the medal in the 100m gave her a bitter-sweet feeling.

“Reaching the final was already something big. Not everybody gets there but it was painful to miss the medal by a very close margin. I started my preparation in January 2017 after some injury and personal problems,” recalls Ta Lou.

Ta Lou enjoyed a busy and successful IAAF Diamond League season in the build-up to the IAAF World Championships London 2017. She became a regular star in the international circuit and continued to improve her times. In the star-studded 200m at the Eugene Prefontaine Classic she improved her personal best by clocking 22.37. She went on to finish second in her following two races in Paris Charlety in 10.96 behind Olympic champion Elaine Thompson and in Rabat where she improved her seasonal best to 10.90 finishing again runer-up to the Jamaican star. In the 200m Ta Lou improved the national record in Lausanne with 22.16 finishing second behind Dafne Schippers and won the 200m in Monaco in 22.25.

Here in London Ta Lou wrote a page in the sporting history of Ivory Coast with her silver medal, and by doing so set the example for the upcoming generation of young Ivorian sprinters that everything is possible with hard work and dedication. Ivory Coast is a country with a huge sprint potential and the recent results of Ta Lou, Ahoure (fourth in the 100m in London in 10.98) and last year’s Olympic finalist Youssef Meite could be a source of inspiration for new rising star in the future.

“I showed that everything is possible,” said Ta Lou. “There are very talented athletes in my country but they don’t have the necessary facilities to train but I want to tell them that they have to believe in themselves and work hard.”