Nicola Adams has just won the gold medal in the women’s flyweight division, beating France’s Sarah Ourahmoune on points to become the first Briton to retain an Olympic boxing title.But that is not the unusual bit, it is the fact that she is crying about it.

“I hadn’t cried for I don’t know how many years, it felt a bit odd,” says Adams recalling the moment with a trademark chuckle.

“I got to the podium and I was so emotional I couldn’t help myself. I’m not a crier, I don’t even really get emotional, but I just remember thinking ‘Wow, I’ve done it’, and the last four years flashed back in front of me.” 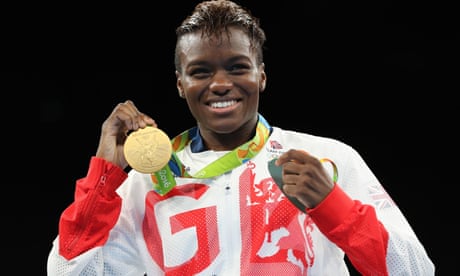 Adams is one of the 16 nominees for this year’s BBC Sports Personality of the Year award, to be announced in Birmingham on Sunday.

She was nominated in 2012, after her first Olympic gold, and finished eighth. This year, the field is one of the strongest in memory – from Mo to Murray via the Kennys and Gareth Bale – but, win or lose, Adams has already secured her own place in history.

“I feel absolutely like this year was amazing and I’m really proud of myself,” Adams says.

“Over these last four years, I’ve put in so much hard work, and I have literally achieved everything in my sport this year.

“I’ve got the full set, the grand slam, and I’m the first boxer, male or female, to do that. I’ve won every tournament there is, and I’m so happy!”

Not that there has not been pain along the way. Beyond the hours in the gym and the aggression in the ring, Adams has endured injuries that might have ruined other sporting careers.

After winning the Commonwealth title in 2014, she was forced to undergo immediate surgery on her shoulder which left her unable to train for eight months!

The next year, she came back and claimed the world title for the first time in her career.

Then, at the beginning of this year, and with Rio just months away, she snapped a tendon in an ankle.

“I tripped over my own feet in training,” she says. “How I managed to do that I do not know.”

The recuperation was arduous but come the summer, Adams’ broad smile was once again inescapable.

In a year in which British values have become politicised and even divisive, Adams has continued to be an ambassador for an inclusive, progressive identity without even looking like she is trying.

Brought up on a council estate in Burmantofts in Leeds, she was raised alone by her mother from the age of 12 and came out as bisexual as a teen.

She is both one of the country’s most prominent gay women and one of the most famous women of colour, too. Yet, her popularity has little to do with what she represents and everything to do with her talent and charming, effervescent personality.

The Anti-Sports Personality of the Year awards 2016

At 34, Adams also flies the flag for the older athlete. After Rio, she faces the question of what to do with the rest of her career and her life after it.
Acting is still high on her to-do list. It’s a sideline she has kept going throughout her career, earning a part on the soap Waterloo Road, and the aim is now to get on Game of Thrones and play “a bad ass wildling”.
In the ring, rumours earlier this year suggested that she would follow Ireland’s Katie Taylor into turning pro. That has not happened just yet and Adams admits she is still torn as to whether to take the plunge.
“Going pro is definitely still an option for me,” she says.
“I love a good challenge, I love it when there are doors to be opened and the possibility of becoming a professional world champion would be amazing.
“But there’s also Tokyo and we’ve never had a triple Olympic boxing champion before.”
Is there ever a moment when she wakes up with aching bones and feels like she’s had enough? “No, that’s the thing! But when I do start to get that, I’ll be immediately like ‘Yeah, that’s it, time to quit!’”

Taylor was part of Anthony Joshua’s undercard last weekend and, whatever happens next, Adams knows she has helped to change the status of her sport beyond recognition.

“You can tell that the industry is more interested in women’s boxing and that’s really nice to see,” she says.

“It’s still got a way to go, though, and I’d love to see a woman headlining a boxing show, that would really be a sign.”

Another reason to keep retirement on the back burner? “Could be, who knows …”

Adams says that winning Spoty would “mean the world”, the icing on the cake after everything she has achieved this year and in her career.

If it is not her, however, she is backing Mo Farah.

“I’d want Mo to win just because he showed real determination and grit to get back off the floor”, she says of Farah’s fall in the Rio 10,000m final.

She laughs again. “That’s something us boxers know about.” 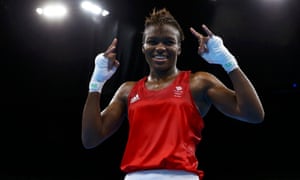