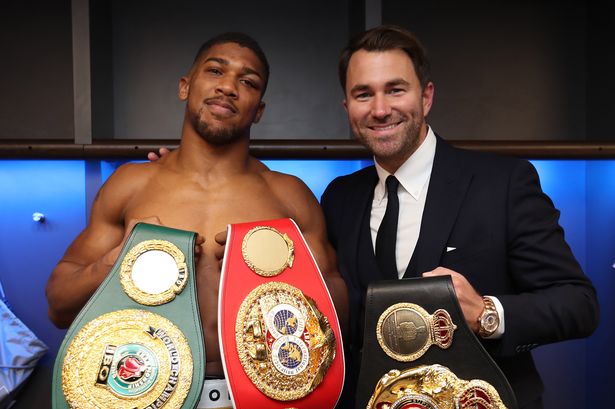 Frank Warren has sent some verbal jabs in the direction of his promotional rival, Eddie Hearn.

Joshua was initially scheduled to fight on April 13th at Wembley Stadium in London.

Hearn, who promotes Joshua, was trying to secure WBC champion Deontay Wilder. That plan fell through when both sides were unable to agree in terms.

There were also financial issues in securing Tyson Fury, and then Hearn was unable to close a deal with Dillian Whyte.

In the end, Joshua stepped away from the April date and will now travel to the United States on June 1 – as he defends his title against Jarrell Miller at Madison Square Garden in New York City.

“We told them we would make that fight any day between Tyson and them on a 50/50 split so that (Hearn’s excuse for not getting the fight) is a load of rubbish.

“Obviously they didn’t want to pay Dillian Whyte the money, that is why the fight didn’t take place at Wembley, so they had no alternative than to go to the States. They didn’t have an event that would sell out Wembley,” Warren told Talk Sport.

“They put themselves in that position. They could have taken $50 million to fight Deontay Wilder last year. They were offered 50 million guarantee and 30 million for the rematch. I think Dillian Whyte has actually seen the paperwork as well.

“I remember I was on this programme with Tony Bellew and he said it was a load of rubbish but as has been proven it was an offer that was made and has now been acknowledged. Even Barry Hearn said it was made. You can’t go on forever just putting on fights where you are putting a guy on a card and thinking it will fill up.”

“It is not down to finance, it is down to the fact they want everything off the table and give crumbs to people.

“ …, that is the reason he is saying he is finding it difficult to make matches. They don’t want to pay anyone – that is the bottom line of it.”