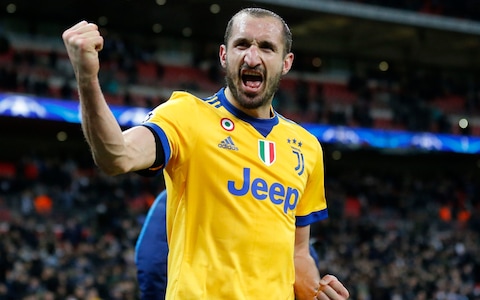 Giorgio Chiellini, the Juventus defender, said he believed history was on his team’s side

Mauricio Pochettino insists he is proud of his “unlucky” Tottenham Hotspur team after they were knocked out of the Champions League by Juventus.

But Juventus defender Giorgio Chiellini has revealed the Italians expected Spurs to blow their big chance because of the club’s history.

Juventus scored with their first two shots on target, from Gonzalo Higuain and Paulo Dybala, to cancel out Son Heung-min’s opener and progress to the quarter-finals.

There were only three minutes separating the second-half goals from Higuain and Dybala, and Harry Kane had a late header, that would have sent the tie into extra-time, hit the post.

“We dominated. Overall, in two games, we were much better. But, at this level, in three minutes, the tie turned for Juventus.

“I am proud. I feel the lads are happy, disappointed, of course, but the quality and capacity of performance of the team was very good.

“Three chances, they score twice. We can call it different things: lack of experience, lack of concentration, but when you watch the game again, Tottenham for more than 70 minutes, were the better team, and we created a lot.

“Yes, unlucky. If we score at the end and score one of the chances, maybe in the first half, now we would be talking in a different way.”

Tottenham had 23 shots to the nine of Juventus, but Pochettino rejected any suggestion the defeat and elimination was down to naivety.

“No, not down to a lack of experience, not lack of concentration,” said Pochettino.

“How many chances did we concede in two legs? Today, three chances and they scored twice.

Chiellini disagreed and believes Tottenham’s inexperience was a deciding factor.

“It’s the history of the Tottenham,” said Chiellini.

“They always create many chances and score so much, but in the end they miss always something to arrive at the end.

We believe in the history.

EDITED FROM: The Telegraph/ by Master Banson