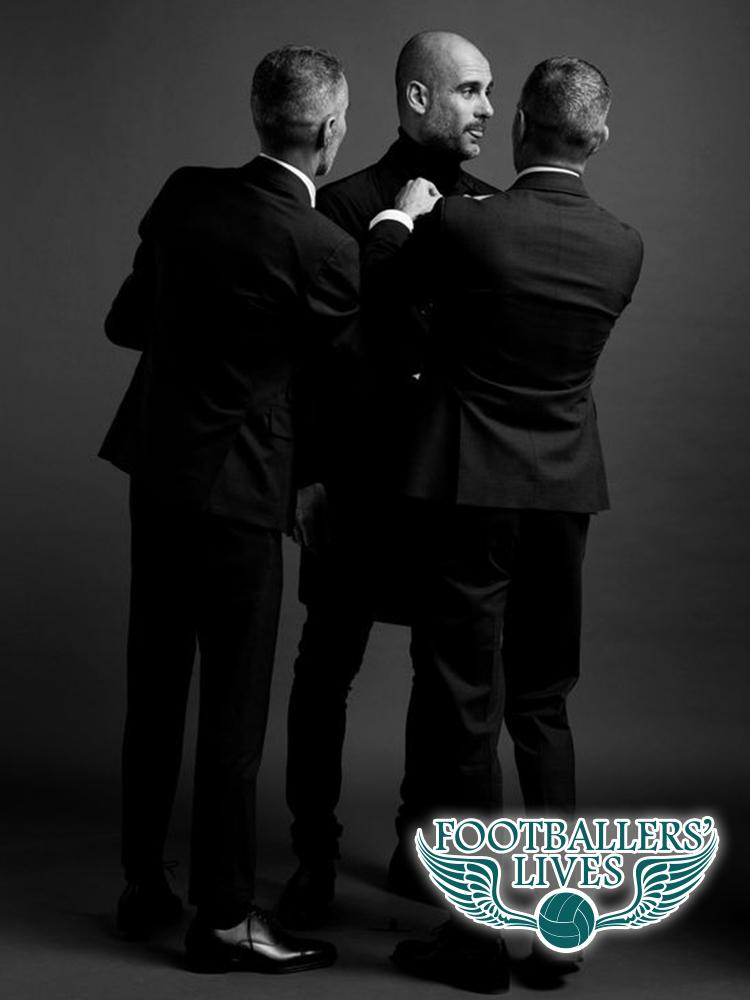 THEY’VE not only led from the front this season on the pitch – off it Man City have been the style kings too.

The Citizens rightfully won all the plaudits for their flair, storming to a Premier League title win 19 points ahead of their nearest rivals Man United.

And if we were handing out prizes for fashion in the top flight, City would once again reign supreme.

Back in 2016, the brilliant clothing line Dsquared2 began a partnership with Pep Guardiola and his all-star team.

That kick-started a trend of the likes of Yaya Toure and Leroy Sane wearing denim shirts on Champions League duty, looking effortlessly cool in the process.

That was just one of a number of outfits City’s stars were spied in, including fitted jeans and bomber jackets, as they travelled across Europe scoring points in the fashion stakes.

SunSport had an EXCLUSIVE chat with Dsquared2 twins and owners Dean and Dan Caten, 53, to find out why they chose to partner with Man City.

We discovered that it’s all about the man at the helm… Pep.

IT COST A PACKET

SHORT OF A BOB?

“We admire Pep Guardiola as a man and as a sports pro,” Dan said.

“We’ve worked with him since the beginning and when we heard about him coaching Man City, we started to follow the team as well.”

Dean revealed: “We first met Pep Guardiola when he was coaching Barcelona and we built a relationship quickly.

“There’s a lot of synergy with Pep and that’s why we thought that he would be the perfect man to work with; spontaneous and brilliant, he’s athletic and classic.”He has natural confidence and ability, charm and style.

“Pep completely represents the Dsquared2 identity where self-confidence and a strong attitude are key.”

Dean and Dan are adamant that working with City has brought them closer to the world of football.

But with City’s first-team, they’ve found a new lease of life.

“The players are strong, in great shape and we love their attitude in general,” Dan divulged.

“They’re the perfect brand partner and represent what we stand for.

“Through this partnership, we’ve gotten to appreciate the sport much more.

“We love the energy, atmosphere and of course the fans – the way people cheer and feel closer to their favourite teams is amazing.”

Dean added: “We love sports and we have always thought that working with athletes could be a challenge, as well as an opportunity.

“When we work with sportsmen and women, we have to create looks that balance aesthetic with practicality.

“It’s important for them to feel comfortable, but chic or classic at the same time.

“It’s been easy for us to consider these aspects, stay true to the Dsquared2 identity and to create something appropriate for the team. It has been a natural fit!”

In terms of team uniforms, Dsquared2 have broken the trend of boring suits or slouchy tracksuits.

The Catens said they wanted to stay true to City’s roots though with their designs, but needed to create something invigorating.

“Dsquared2 and Manchester City have a strong connection in terms of being heritage brands with a strong DNA,” Dean said.

“But in the same breath, we both look towards the future.

“In fact, our background has always affected our style and collections in a natural way.

“Our Canadian roots and life-working experiences in the US, Italy and UK have always been the basis and the inspirations for everything we do.

“Especially for the Dsquared2 universe and our motto ‘Born in Canada, Living in London, Made in Italy’.

“For Manchester City, we referred to our consolidated expertise and fashion background but we really admire the British sartorial tradition – the uniforms are a nod to that.”

Dan said: “We met and spoke with the team members to really understand what they wanted and would feel comfortable with.

“They’re all great, cool, confident guys and the look reflects that attitude.

“The outfits are an important and impactful visual statement.

“Manchester City has believed in our work right away and there is a strong bond of trust.”

TAKE IT AS FRED

Starting at £970, it may leave a dent in your wallet but you’ll struggle to find a better whistle and flute on the market.

“Whilst the official club suits are reserved for the Man City players, we are super-proud to offer products inspired by Pep and the players,” Dan said.

Both Dan and Dean are hopeful for the future and their City collaboration. They want to continue to be involved in sport going forward.

“We do not have a favourite player, but we would certainly like to be more and more present in the world of sport,” Dan said.

Dean concluded: “We hope this collaboration continues and deepens, and that the club and the players feel closer and closer to the brand.”

And if City’s outfits are anything to go by, they shouldn’t find it hard to attract more sports star suitors to the brand.