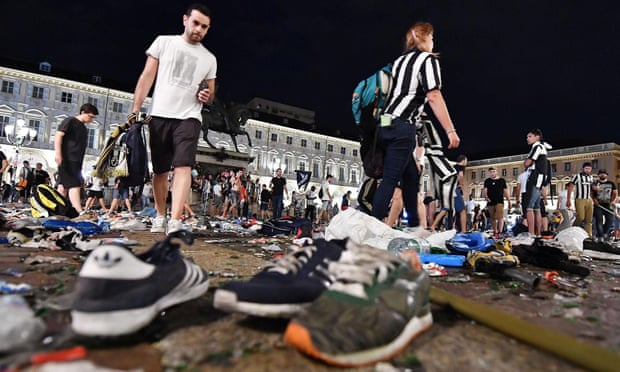 Juventus fans watching the Champions League final stampeded in a Turin piazza in panic after mistaking firecrackers for an explosion or gunshots.

Medics treated fans in the square for cuts and other injuries sustained in the chaos. The Italian news agency Ansa reported that around 600 people had been injured, with one child understood to be in a critical condition.

Thousands of people had gathered in Piazza San Carlo to watch Juventus face Real Madrid on giant TV screens. At a certain point, hundreds ran from the centre after some reported hearing a loud sound, an explosion or a shot, according to the Associated Press reporter Brian Hendrie, who was in the square.

“At that moment, I saw the entire piazza went in the direction next to the screen to escape, all in a panic,” he said. “They ran, fell on the ground on the glass.” He said some reported having heard a small explosion, others a shot. “I heard five or six different versions. It sparked a panic.”

Within minutes, dazed fans in Juve’s black and white jerseys returned and milled about the piazza amid the broken bottles and rubbish littering the cobblestones, with the match largely forgotten.