I can beat Lomachenko – Gervonta Davis 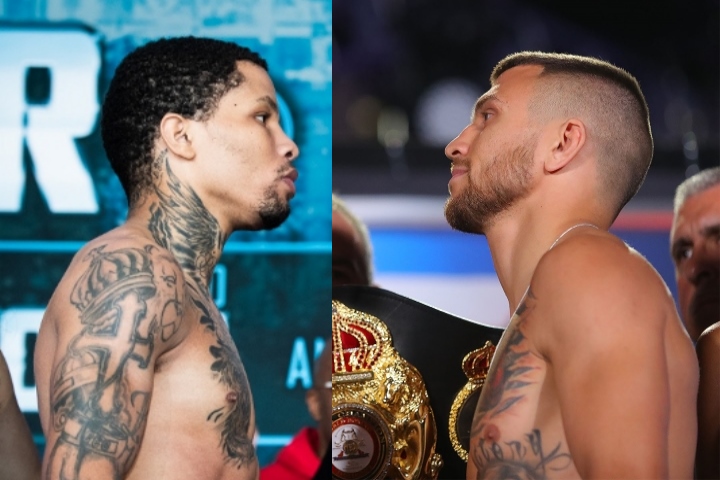 Gervonta Davis doesn’t intend to mention Vasiliy Lomachenko quite this much.

He’s asked about boxing the WBA lightweight champion so often, though, Davis can’t quite help it. The unbeaten Baltimore native admits, too, that it gets irritating to hear and read so much praise heaped upon Lomachenko, who’s commonly considered one of the top two boxers, pound-for-pound, in the sport.

“It is frustrating sometimes,” said Davis, who stopped Hugo Ruiz in the first round Saturday night at Dignity Health Sports Park.

“And I don’t wanna keep saying his name because people on social media say I keep saying Lomachenko’s name. But it’s because they have him [ranked high] with only 12 fights, and me and him fought the same opponents.

“They just praise him so much. And I fought [Jose] Pedraza, and I don’t wanna say I just smoked Pedraza, because it wasn’t that. I had a good performance, but he was tough. I remember hitting him with some shots that I thought he would [go down from], but he didn’t go down.”

Davis dismantled Puerto Rico’s Pedraza, who entered their January 2017 fight undefeated. Stopping Pedraza in the seventh round earned Davis the IBF junior featherweight title, which he lost on the scale seventh months later, the day before he knocked out Francisco Fonseca on the Floyd Mayweather-Conor McGregor undercard.

The 30-year-old Lomachenko (12-1, 9 KOs) went the distance with Pedraza (25-2, 12 KOs) in a 12-round bout that the skillful Ukrainian southpaw won by unanimous decision December 8.

As for when, well, that’ll depend on when Davis’ handlers – advisor Al Haymon, promoter Floyd Mayweather and Mayweather Promotions CEO Leonard Ellerbe – decide the time is right to engage in negotiations with Todd duBoef, the president of Bob Arum’s Top Rank Inc.

“Me and Floyd, we actually talked about it,” Davis said.

“Even me and Al talked about it, you know? But it’s about making it at the right time. Everything don’t happen overnight. We know that Al and Bob Arum, they did business together before. But it be hard making fights with them, too. But I’m just a student of the game. I have a great team. I’m just following their lead.”

Lomachenko is scheduled to defend his lightweight title April 12 at Staples Center in Los Angeles. Top Rank’s matchmakers are looking for an appropriate opponent because IBF lightweight champion Richard Commey (28-2, 25 KOs) suffered a hand injury in his February 2 fight that’ll prevent him from facing Lomachenko that night.

At the latest, Davis will return to the ring sometime in July against an undetermined opponent in his hometown of Baltimore. Assuming he wins that fight, Davis will continue following Mayweather’s advice regarding boxing Lomachenko because the retired Mayweather made so many smart moves on his way to becoming the highest-paid professional athlete in sports history.

“That’s why I listen to my team, because it wasn’t just him making those decisions like that,” Davis said.

“It had to have been a team around him, telling him, because he’s a fighter. So, he probably felt the same way. ‘We can fight. I know I can beat him.’ But right now ain’t the good time, and someone was over him to tell him it’s not the good time. So that’s exactly why I listen to my team.”