I Don’t Care If The Odds Change – Spence, Jr 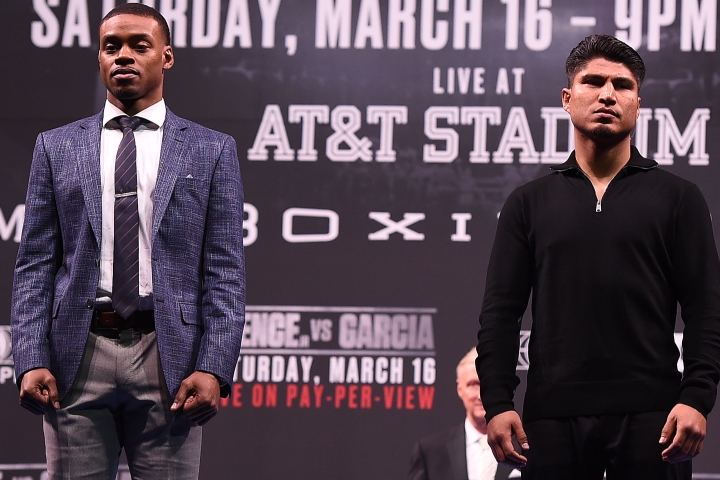 Had Errol Spence paid much attention to early whispers suggesting a physical mismatch, he wouldn’t have any reason to enter the ring versus Mikey Garcia but then, he’d also be left without any fight at all—and one which the once considerable gap in odds continues to narrow.

The unbeaten welterweight titlist welcomes the challenge of Garcia, an undefeated four-division titlist who moves up in weight ahead of their March 16 showdown at the AT&T Stadium in Arlington, Texas. It will mark the Texas-based southpaw’s first fight since a one-round blitzing of Carlos Ocampo in a Dallas-area homecoming last June, along with the PPV debut for both boxers.

“This a real boxing event, a real boxing match between two top pound-for-pound fighters who are undefeated,” Spence (24-0, 21KOs) emphasized during a media conference call to discuss the event.

“It’s not something that happens often especially in today’s market. I’m 100% ready, I’m in tip-top shape, have crazy focus and tunnel vision for March 16.”

When the bout was first announced, it was suggested that Garcia (39-0, 30KOs) is biting off far more than he can chew. The 31-year old from Oxnard, Calif. has fought as heavy as super lightweight—in back-to-back wins over former four-division titlist Adrien Broner (July ’17) and a 140-pound title-lifting effort over Sergey Lipinets last March—but enters this fight on the heels of a lightweight title unification win over Robert Easter last July.

The initial knee-jerk reaction from naysayers suggested that the 12-pound climb in ring weight versus a natural welterweight as talented as Spence was akin to a fool’s errand.

“(Garcia) definitely brings a lot to the table,” notes Spence, who attempts the third defense of the title he claimed in a May ’17 knockout of Kell Brook on the road in England.

“People who say he doesn’t stand a chance don’t know anything about boxing. They don’t understand the history of boxing.

“He won a world title at 140, that’s just one weight class from 147. He’s fundamentally sound, has a lot of skills and has that boxing pedigree. So, he definitely stands a chance.”

It’s more than just a hard sell from the reigning welterweight titlist, as boxing experts have also taken note even if oddsmakers continue to believe otherwise.

Spence opened as a 4/1 favourite and is steadily hovering around the 9/2–5/1 range with most reputable sportsbooks.

Yet, several industry insiders suddenly find themselves torn at picking a winner. Those who give Garcia a shot at pulling off the upset view the fight from his perspective—that he wouldn’t have accepted it if he didn’t see something in the bigger foe which he could exploit.

While Spence welcomes any commentary that speaks to the event as well as the matchup itself, he will treat it the same as he did with opinions from the initial announcement—as talk that has no bearing on how he prepares for the event.

“That’s not anything I’m paying attention to,” Spence said of the growing perception of Garcia’s chances of winning.

“I can’t worry about that, just what my team thinks and how our preparation is going. I wouldn’t care if the odds change (in his favour), me and him are gonna get in that ring and fight.”