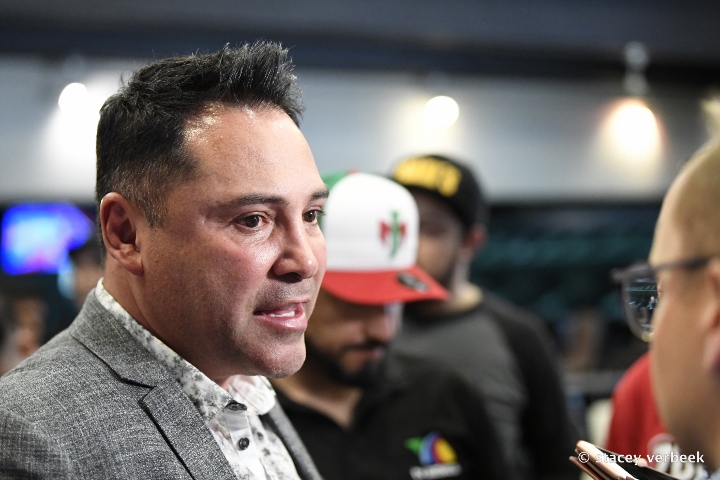 The back and forth verbal battle between Golden Boy Promotions head Oscar De La Hoya and UFC president Dana White has made headlines for years on end.

White has never pulled back any punches on De La Hoya, and neither has the Hall of Fame fighter and former six-division champion on the executive largely responsible for the growth of MMA.

The disparaging remarks from both sides have made fodder and headlines in combat sports circles, but De La Hoya is apparently ready for some sort of a ceasefire.

“What am I going to say about Dana White? I forgive the guy, for whatever he says,” claims De La Hoya, before the slide-tackle.

“He might be having issues or problems in his life,” disses De La Hoya, veiling it, “He might be too stressed. I understand that.”

De La Hoya, then pontificates, “I am a very forgiving guy,“ offering a truce.

“Whatever has been said … maybe I had stuff in my life as well, and I said stuff about him.

“Hopefully we can crush it once and for all and just move on,” suggests De La Hoya, seeming to determine the next logical course of action.

“He sticks to MMA and I stick to boxing,” De La Hoya said in an Instagram Live session on Tuesday.

White has previously called De La Hoya a “cokehead nutball” while De La Hoya has told White that he’s “such a little b—-” and that the “Fertitta brothers are the ones who built the business and you were lucky enough to just have 10% of UFC.”

De La Hoya has even tried his hand at promoting MMA events much to the dismay of White, who has previously challenged him to a fight under MMA rules.

De La Hoya went on to say that he’s in a much better place in his life now as he prepares for a comeback in the boxing ring at the age of 46, despite having last fought in 2008 and retiring having lost four out of his last six fights.

“There is something that happened in my life that has just changed me and made me a whole new person. I am just completely different,” said De La Hoya.

“I had to work at this for weeks and months, working on my inner self.

“I am really excited that a lot of new and great things are happening. Not to me directly and personally, but things that I’m going to be doing for a lot of people.

“That’s the most important.”