I May Be Ringside at Spence-Garcia – Pacquiao 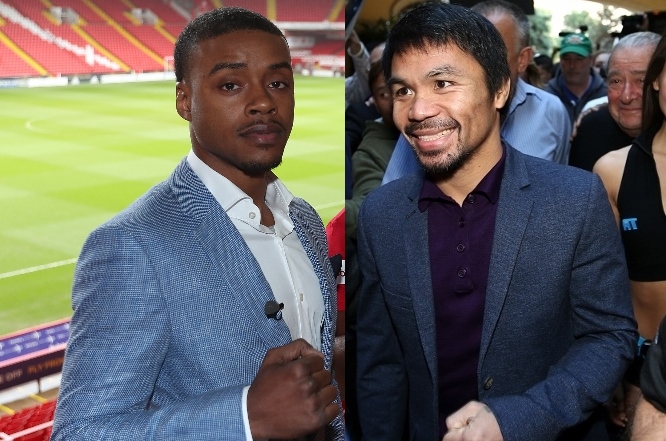 Spence will face Garcia on March 16th at AT&T Stadium in Texas.

Pacquiao was in action back n January, when he dominated Adrien Broner over the twelve round distance.

The 40-year-old Pacquiao (61-7-2, 39 knockouts) has interest in the winner of the fight, especially Spence. But it wouldn’t be surprising to see him face Garcia – especially if he looks good, even in losing.

“I might go and watch in Texas. I will watch how [Spence] will fight,” Pacquiao told Rappler.

Pacquiao’s next opponent has yet to be named, but Spence (24-0, 21 KOs) has been looking to face the top names in the weight class.

A few months ago, Pacquiao signed on with Al Haymon and Premier Boxing Champions, who also work with Spence.

But the contest that Pacquiao really wants is the rematch with Floyd Mayweather.

Mayweather won a 12-round decision over the Filipino superstar in 2015. Their contest was the most lucrative fight event in history, with more than half a billion in revenue.

After the loss to Mayweather, Pacquiao claimed that he entered the ring with a right shoulder injury that affected his performance.

He wants to prove in a rematch that with both shoulders at 100% he can beat Mayweather.

One of the driving forces for Pacquiao to reach a deal with Haymon, is to get Mayweather back in the ring.

“The negotiations are ongoing. There will be updates one to two weeks from now,” Pacquiao said.

“If I get to fight Mayweather and make him come out of retirement, that would be better since it would give me the chance to prove that I could win this time.”