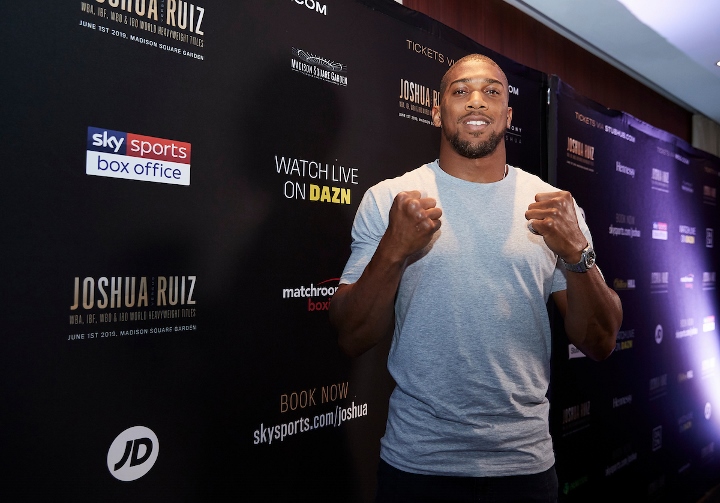 Anthony Joshua heads into this weekend’s title fight versus Andy Ruiz widely regarded as the best heavyweight in the world, and in a bout which marks his long-awaited debut in the United States.

Yet the only questions the media seem to have for him are the same as for his unbeaten divisional peers Deontay Wilder and Tyson Fury—when we will see him in fights with the other two.

The unbeaten, unified heavyweight title has properly anticipated such commentary, doing his best to take it all in stride ahead of Saturday’s headliner versus Ruiz.

Instead, the three-person panel dove right in with past remarks from Wilder and Fury—who’ve appeared on the show in consecutive weeks—regarding the unbeaten Brit.

“For me, Anthony Joshua needs to prove himself on the world stage,” Fury (27-0-1, 19KOs) insisted during his segment a week ago.

“He’s so happy fighting in England, he fought Klitschko who I destroyed mentally—he had a war with a beaten fighter. He has to prove he’s willing to step up to the plate and fight the best.”

The clip was met with a grin and a proper response.

“Tyson Fury has his opinion and I respect it,” Joshua stated.

“It’s why we’re chasing these fights. We’ve put in a massive offer to fight Tyson Fury on April 13 (at Wembley Stadium in London, England).”

Joshua had hoped for a big fight at Wembley to follow his most recent bout, a 7th round knockout of Alexander Povetkin last September.

The fight helped launch the DAZN streaming service in the United States, along with solidifying his place atop the heavyweight division, which has been the case at least since his thrilling, off-the-canvas knockout win over former lineal champion Wladimir Klitschko in their epic April 2017 war.

The bout marked the third successful defense of the IBF heavyweight title Joshua acquired in a 2nd round knockout of then-unbeaten Charles Martin one year prior.

The win over Klitschko included the vacant WBA title, adding the WBO strap in a 12-round win over Joseph Parker in their unification clash last March.

The entirety of Joshua’s title reign all the way through Povetkin all came while Fury was believed to be done with the sport.

His career-best 12-round decision win over Klitschko to win the World heavyweight championship was his last fight for more than 30 months as he spent the downtime overcoming injuries, a retroactive drug-testing suspension along with alcohol and substance abuse as well as mental health issues.

The unbeaten Brit outboxed Wilder for most of the night but also suffered two late knockdowns in settling for a disputed 12-round draw which most felt should have gone his way.

Plans for a rematch were scrapped when Fury instead signed a deal with Top Rank and ESPN, with that debut coming in a June 15 clash with unbeaten but unheralded Tom Schwarz in Las Vegas.

“Look, I fought Wladimir Klitschko, he’s fought him as well.

“He’s fought Wladimir Klitschko and Deontay Wilder in his 10-year career,” points out Joshua, who’s scored wins over perennial Top 10 heavyweights in all but one of his last eight starts.

“I understand his frustration, he wants to prove himself as well.”

Saturday’s bout will be the first in the U.S. for Joshua, who captured a Gold medal in the 2012 London Olympics.

The unbeaten heavyweight has previously fought exclusively in the United Kingdom throughout his pro career.

His stateside debut comes versus Ruiz (32-1, 21KOs), a California-based contender coming in as a replacement for Brooklyn’s Jarrell Miller who was scratched after failing three drug tests while in training for the event.