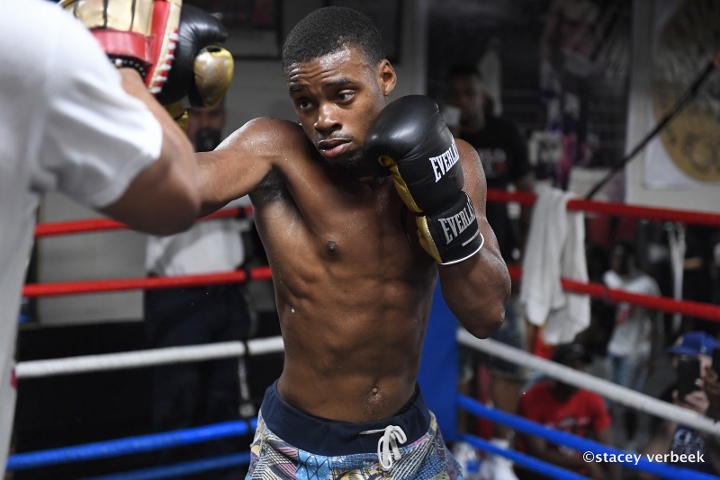 IBF welterweight champion Errol Spence and four-division champion Mikey Garcia recently met the press in Arlington, Texas to discuss their March 16th pay-per-show down that will be distributed by FOX.

The fight takes place at Cowboys Stadium and will be the network giant’s first foray into the pay-per-view realm.

Both fighters are regarded as elite in the sport.  Spence is known as the biggest puncher at 147 while Garcia, who hasn’t fought above the super lightweight limit, is known for having some of the best technical skills in the sport.

Speaking to a group of reporters, Spence believes that he can overcome anything that Garcia brings to the ring.

“I think I am just a better fighter. He is a great fighter and has good skills but I think overall I am just better,” said Spence.

The 2012 US Olympian will be headlining his first pay-per-view event and believes that this is the next step in his progression to becoming a household name among sports fans that don’t closely follow the sport of boxing.

“It will definitely get me to mainstream especially fighting on Fox and all of the commercials and exposure we have been getting. I think the winner can definitely crossover and be that mainstream star,” Spence explained.

At 29-years-old, Spence is in the prime of his career.  He believes that he is on the fast track to becoming the best in the sport.

If 2019 plays out the way that he envisions, he believes that he will be regarded as the best fighter on the planet.

“I definitely want that. I think that can happen especially in the welterweight division with all of the talent that is there. It just takes all of the fighters fighting each other and I think that will definitely happen and I will be pound-for-pound by the end of this year,” Spence stated.