I’ll get the knockout – Canelo

Saul “Canelo” Alvarez bids to extend his dominance of the middleweight division here Saturday when he takes on Daniel Jacobs in an eagerly anticipated unification bout.

Mexican icon Alvarez is putting his World Boxing Association and World Boxing Council titles on the line when he faces Jacobs at the T-Mobile Arena aiming to claim the American’s International Boxing Federation belt.

The two boxers near brawled once they went face to face at the official weigh-in on Friday. 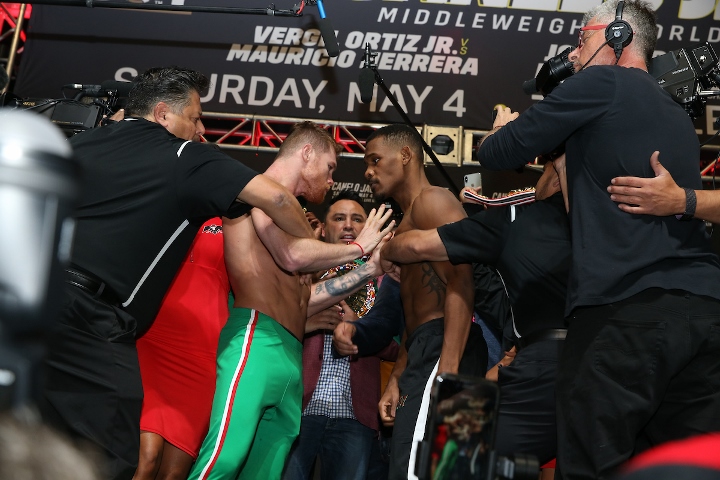 Jacobs then verbally lashed at Canelo for pushing him and trying to make things physical.

“I prefer to talk once I’m in the ring and my boxing will speak for itself,” said Jacobs (35 wins, two losses, 29 knocouts). “It has never been my intention in my lead-up to any fight to sort of create this animosity to sell the fight or to bash my opponent.

“Never have I ever wanted to do that. It has never been in my nature. I know that boxing is just a sport,” added Jacobs, nicknamed “Miracle Man” after overcoming a rare form of bone cancer earlier in his career.

Alvarez (51-1-2, 35 KOs) has not fought since demolishing Britain’s Rocky Fielding inside three rounds in December to claim the WBA “regular” super-middleweight title.

The 28-year-old is back at his preferred weight for Saturday’s fight with Jacobs, who has notched three victories on points since a bruising 2017 defeat over 12 rounds against former champion Gennady Golovkin.

With the fight timed to coincide with Mexico’s festive Cinco de Mayo weekend, Alvarez is expected to once again benefit from a large support in an arena he last graced when he defeated Golovkin by majority decision in September last year.

Alvarez also earned a controversial draw with Golovkin at the same venue a year earlier, a bout that Jacobs believed should have been awarded to the Kazakh champion.

Alvarez, meanwhile, vowed to take the decision out of the judges hands.

“I’m ready, ready to beat him, ready to continue writing the story, as I’ve always done,” the Mexican said.

“I’m a boxer who has been confronted with all boxing styles. Maybe he’s bigger, but that does not bother me, I’m aiming for the knockout and I’m going to get it.”

If successful on Saturday, Alvarez could next face American Demetrius Andrade, the WBO champion, or a money-spinning third fight with Golovkin to settle their rivalry.