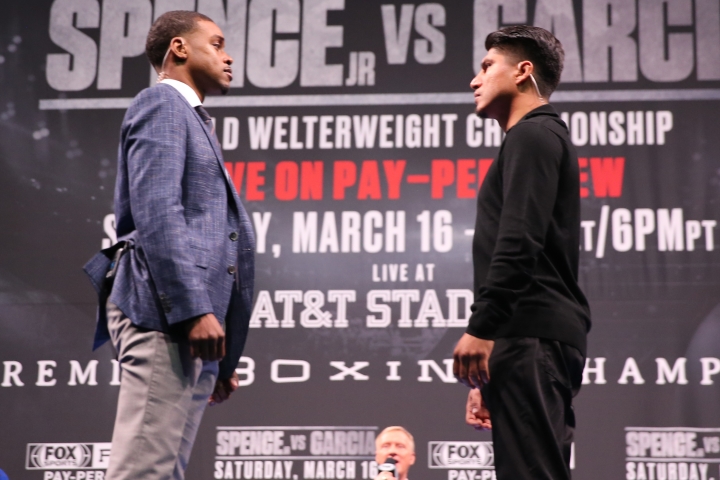 Mikey Garcia is convinced he is better than Errol Spence Jr.

That’s why he pursued what some people consider an impossible mission. That’s why the undefeated four-division champion can’t wait to get to Dallas next week for the biggest fight of his career.

Garcia gladly discussed those things when he met with reporters for an open workout Tuesday at the gym his brother/trainer, Robert Garcia, owns in Riverside, California.

The 5-feet-10 Spence stands four inches taller than Garcia, has a considerable reach advantage and might out-weigh Garcia when they enter the ring March 16 by 10-plus pounds. A rehydration clause for the IBF’s second-day weigh-in the morning of their welterweight title fight will require Spence and Garcia to weigh in again at 157 pounds or less.

Regardless of how many pounds separate them when they enter the ring at AT&T Stadium in Arlington, Texas, Garcia feels he’ll pull off an upset against the hometown fighter.

“Not by a lot, but just enough to beat him. He also reminds me of myself in a lot of ways, the way he fights, the way he is. He does everything well, good footwork, good speed, controls the fight at his distance that he likes. … In a lot of ways, it resembles the way I fight. But I still feel that I’m better in every one of those ways and that’s what I’m betting on.”

The 29-year-old Spence (24-0, 21 KOs), of nearby DeSoto, Texas, is listed by most Internet and Las Vegas sports books as at least a 4-1 favourite over the 31-year-old Garcia (39-0, 30 KOs), of Moreno Valley, California. Garcia couldn’t care less about his supposed role as a big underdog entering their FOX Pay-Per-View main event.