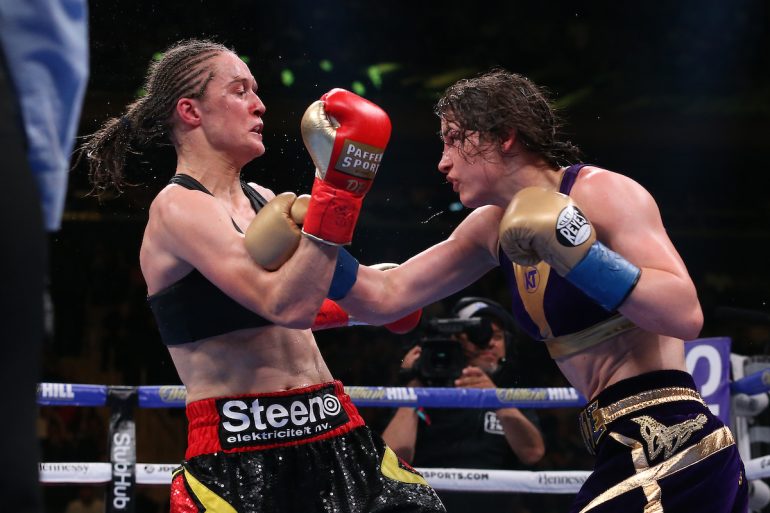 Neither Katie Taylor nor Delfine Persoon were at the post-fight press conference at Madison Square Garden following their undisputed lightweight championship fight, but there was another undisputed women’s champion in attendance.

Claressa Shields, the two-time Olympic gold medalist and undisputed middleweight champion, told reporters afterwards that she had the fight a draw at five rounds a piece, with Taylor leading heading into the final round.

The official scorecards read a draw on one card, and a narrow 96-94 advantage on two cards for Taylor (14-0, 6 knockouts), making her the majority decision winner and the inaugural Ring Magazine lightweight champ.

The story of the fight was written over both fighters’ faces, with both fighters sustaining cuts and swollen eyebrows. Taylor, a 2012 Olympic gold medalist, was running on empty at the final bell, following what was a physically punishing battle.

Shields drew a contrast between her undisputed-clinching victory over Christina Hammer earlier this year and Taylor’s close fight as proof that she, not Taylor, is the “GWOAT”, or the greatest woman of all time, a term she herself invented and frequently refers to herself as on Twitter.

“We saw it tonight that I am the GWOAT,” said Shields (9-0, 2 KOs). “Listen, I love Katie Taylor, I love the way she fights, but I fought against the top women in my division and I haven’t had a close fight. [Hannah] Gabriels [knocked me down] but the fight wasn’t close. Today a lot of Katie Taylor fans thought it was a draw or that she lost. I don’t feel like she lost, but you see how I performed against Hammer.” 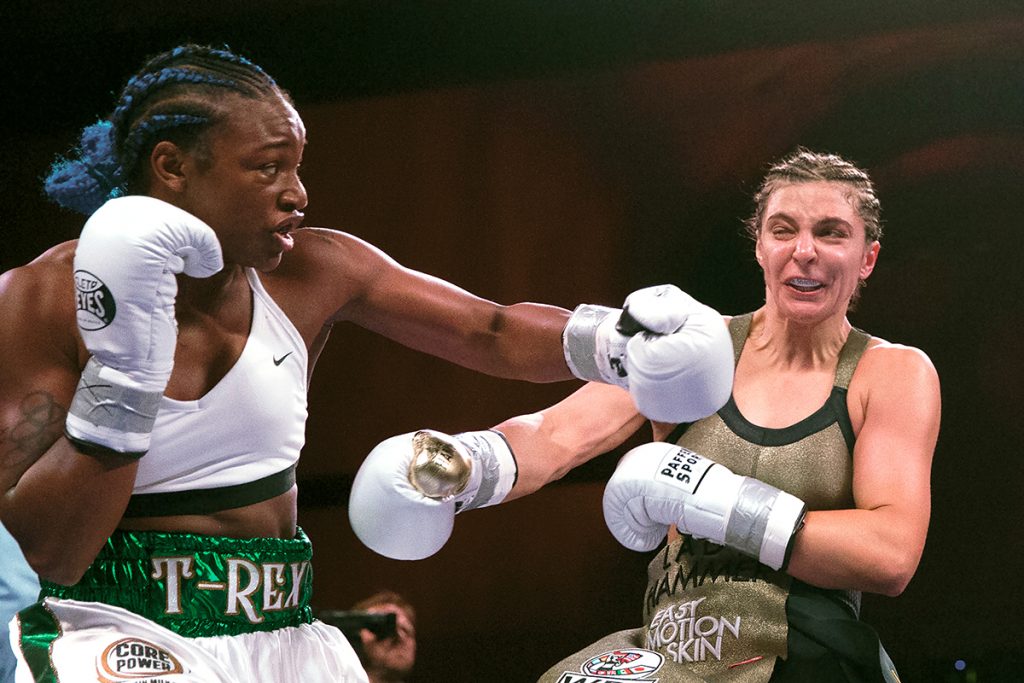 Shields said that Persoon (43-2, 18 KOs) had been overlooked by the public since few had seen her in previous fights in her native Belgium, but the long-time WBC champion didn’t come to lay down against the better known Irish star.

“These are the kind of fights we need to see in women’s boxing and I’d love to see the rematch,” Shields adds.

Asked what Taylor could do better in a rematch, Shields says she needs to box more and brawl less.

“Katie, for one, needs to not lean back. Delfine is taller than her, and Delfine’s only game plan was to come forward and overpower Katie. She should have used her strength against her, turned her and even went to Delfine’s body. When you’re fighting against a strong fighter, you got to go to the body and Katie wasn’t able to do that because she was busy trying to keep Delfine off her, backing up,” said Taylor.

“Also, just keep the jab out there and keep her hands up, she got hit with unnecessary punches today that kind of had me freaking out. I’d never seen her get hit like that before, then she got cut. It was shocking to me, more than being a boxer, I’m a fan of her so I’m happy she won but it was a close fight.”

Taylor may be in agreement with much of that, since she admitted in the post-fight interview that she didn’t listen to her trainer Ross Enamait as much as she should have.

“That’s my problem sometimes. I like a fight a bit too much sometimes. I probably should’ve fought on the outside a bit more sometimes. But then I just needed to dig deep and get that win,” said Taylor.

Promoter Eddie Hearn said he also had the fight scored a draw and said Taylor wanted to do the rematch immediately to settle any doubts about her supremacy at 135 pounds.

“Katie Taylor is just an incredible competitor. She says, ‘did people think Persoon won the fight?,’ that’s what she said to me. I said ‘yeah, most people had it a draw but quite a few people had her winning.’

Shields thinks Taylor would be best served to take a few fights in between a second fight with Persoon.

“She’s the undisputed champion, she can do what she wants,” said Shields. “I think it’d be best if she gets a few more fights and fixes her stuff and actually look at the film and then fight her again. I think it will play in Delfine’s favor if she just jumps back in the ring with her.”

Shields says she will be back in the ring on August 17 in her hometown of Flint, Michigan, moving down in weight to junior middleweight to target a titleholder to be named.

While Shields says the size difference between her and Taylor would make a fight between them unlikely, she think Taylor has the ability to defeat Cecilia Braekhus, the undisputed women’s champ at 147 pounds.

“I think Katie has the skills to beat her and just being fair, Cecilia has been saying that she’s not gonna fight me unless I come to 147 so hopefully it’s the same thing for Katie Taylor, she’s not gonna fight her unless she comes to 147,” said the 24-year-old Shields, who says she hasn’t made 147 pounds since she was 16.