On the third day of the first Test hosted by the Saurashtra Cricket Association Stadium, and with his father-cum-coach Arvind watching in person for the first time, it was somehow fitting that it was the first 100 scored by an Indian batsman on the ground.

If such layers of additional meaning upped the pressure on Pujara, the No3 showed little of it on 99 when he calmly cut Chris Woakes’ third delivery with the new ball after tea behind square before haring down the wicket, lifting bat and helmet to his team-mates, his father and the 7,000 or so present for this particular slice of history.

It is a shame that so few have been here for the first three days, not least since Virat Kohli spoke on the eve of the match of a hope that by taking Test cricket to new frontiers audiences could be re-energised.

This is the second of six grounds making their Test debut during what is an epic season of 13 fixtures for India.

The crowd, at least, has been swelled here now by the vast numbers of schoolchildren who had beenbrought in on buses.

Their presence ensured the supporters could make their collective voice heard throughout the day and particularly in the buildup to their favourite’s milestone. The acoustics of this smart bowl turned chants of Pu-ja-ra into a crescendoing din either side of tea for each of the 10 balls sent down when he was short of his 10th Test hundred.

When the moment came, a further few decibel levels were found still.

Woakes had been the bowler to cause Pujara the most trouble earlier in the day, with the right-hander thrice struck in the grille of the helmet by the short ball.

From there the only heart-in-the-mouth moment for Pujara, his father and the crowd came when, on 86, he successfully reviewed an lbw decision given to Zafar Ansari. If it was a deflating moment for England, it may yet convince India of the virtues of the DRS and its much-debated predicted path after this five-Test trial of the system.

These brief moments of concern aside, Pujara had looked immovable until Ben Stokes eventually found the edge of his bat on 124 in the final session, having been in fine fettle from the outset when he came in during the second over of the day.He was certainly more spring-heeled than Gautam Gambhir, the man he replaced, and when he began lacing drives through cover and dancing down to the spinners almost immediately, it felt almost inevitable a cruise to three figures for this beautifully correct right-hander would follow.

It was his father who laid the foundations of his technique, finding time around his job working for the railways to throw balls to his four-year-old son. Starting with a rubber ball, before moving on to a harder one within only a few months, sets of 50 to 100 were sent down from short range morning and night but, crucially, underarm.

As a former player for Saurashtra and Indian Railways himself, with half a dozen first-class appearances, Pujara Sr was of the belief that only by delivering the ball from such a low trajectory could his son learn to play with a straight blade.

Along with this unique grooving, he was also kept away from playing street cricket for fear of kinks in technique possibly creeping in. 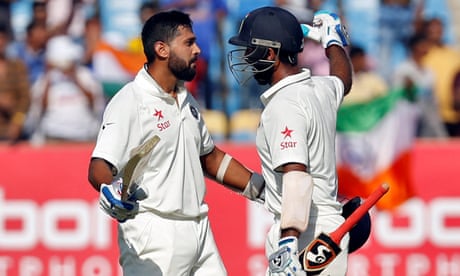 This approach was taken for eight years before, aged 12, Cheteshwar played for Saurashtra juniors in what was his first proper cricket. As told to James Astill in his wonderful, award-winning history of the sport in India, The Great Tamasha, the immediate results were astonishing, with a successive run of five half-centuries peeled off before a maiden hundred and then an unbeaten triple.

Aged 17, tragedy struck Pujara’s family when his mother Reena passed away after a battle with cancer. Among her parting words, so the story goes, was an assertion to her husband that their son would one day play for India.

Two months after her passing came a first-class debut, from which the runs flowed immediately and within five years came the Test debut against Australia in 2010.

Since then, Pujara has looked to establish himself as the heir to Rahul Dravid at No3 following the Wall’s retirement, with his career one of dominance at home – here he averages 68.2 from 21 Tests – but still only half this from 18 away. At 28 years of age there is plenty of time and talent with which to put that right.

His father has himself slowed down a touch of late following heart surgery but nevertheless still provides his coaching to local children free of charge.

Pujara Jr visited a group of them on the eve of this Test as the walking, talking proof that his methods can pay dividends.

It would be nice to think that some of them were among the sparse but noisy crowd to see it put into practice too.