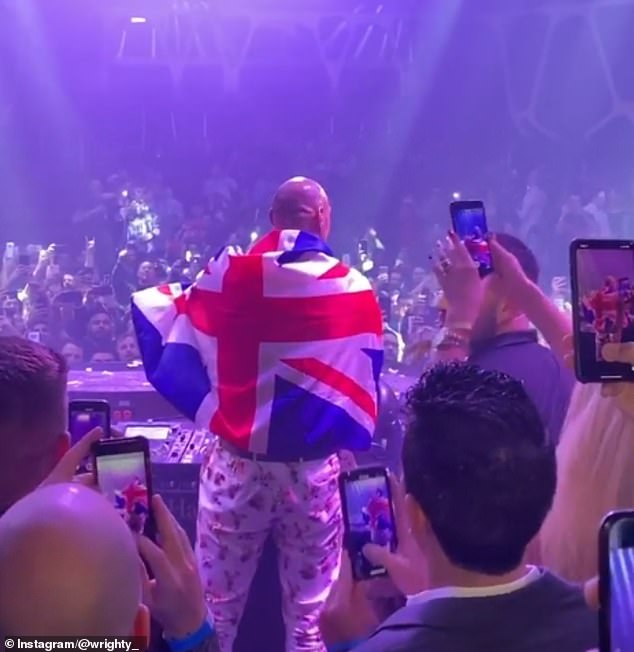 Draped in a Union Jack, Tyson Fury took centre stage in Hakkasan to get the party started

The Fury entourage selected the plush Hakkasan venue as their destination of celebration, to revel in the moment of climbing back to the summit of world boxing.

Fury took centre stage in the iconic venue, dressed proudly in a Union Jack. Ever the showman, Fury showed no signs of fatigue after his blockbuster fight by seizing the microphone and whipping up the crowd.

Celebrities in the private area behind Fury’s podium captured the scenes as the British star belted out: ‘There were three Bronze Bombers in the air, and the Gypsy King from England shot them down!’

With the crowd buzzing with energy, Fury kept spirits high by booming straight through into a hearty rendition of Neil Diamond’s Sweet Caroline, much to the Hakkasan’s approval.

His brother, Love Island star Tommy, was by his side and also captured the wild action before posting to social media.

Former One Director star Liam Payne sang on stage as Fury wrapped himself in a Union Jack flag.

Speaking following his spell-binding win over Wilder inside the MGM Grand, Fury began to joke he would be having a quiet evening with a few bottles of water and perhaps a slice of pizza… before revealing his true intentions.

‘I might have a slice of pizza. I think i’ll just go home, have a couple of glasses of water and that’s it really… We’re going out tonight baby! Hakkasan!’ Fury told iFL TV with a booming laugh and a broad grin.

The famous Hakkasan is located near the entrance of the famous Las Vegas strip, and on an average weekend holds a general admission charge of $30 – $50 entry fee.

The usual wait time to access the venue ranges from one to three hours, though queues are set to be endless once the Fury party rolls into town.

World-renown DJ’s often hold court at the decks inside the venue, with Calvin Harris and Tiesto regular performers.

Kim and Khloe Kardashian are known attendees of Hakkasan, with the club insisting on specific dress code requirements for the majority of its guests.

General bar drinks in the venue will set one back around $17, while a single shot tills in at the $10 mark.

Continuing in his post-fight comments, Fury went on to poke fun at all those who had doubted him: ‘I told everybody I was going to knock him out and nobody listened. But here we are.

‘I knocked out a knock-out king and I can’t punch! I can’t crack an egg, can I?

‘Two feather dusters these are,’ Fury added, looking down at his hands with a grin.

‘I don’t remember anything, it was all a blur and that was it. I remember knocking him down a few times, hitting him with a body shot and knocking him down. It was what it was. It was a great fight and I lived up to the hype.

‘Every time I say something I always do, and I have done it.’

Fury’s promoter, the legendary Bob Arum, has said the ball now rests in Wilder’s court regarding a possible trilogy clash, due to a re-match clause which the ‘Gypsy King’ is happy to honour.

‘The question is directed to Deontay Wilder,’ said Arum.

‘He can opt out of a third now and get himself together and do it again next year in which case Tyson Fury will keep himself busy with other opponents. If he wants to go ahead, that’s what the contract says and we will honour that.’