Sometimes it is only when you look back that you realise you have crossed a border. A year on from England’s 13-9 defeat by Ireland in Dublin, their first loss under Jones, that game seems to have been a clear watershed in the fortunes of both teams.

It was the point when Ireland passed England to become the best team in Europe. Ireland are unbeaten in 11 Tests since and are now Six Nations champions. England are still faltering, looking for the sure footing they had before they tripped in that match.

According to the world rankings, England are still second behind the All Blacks; the truth is Ireland overtook them last March. 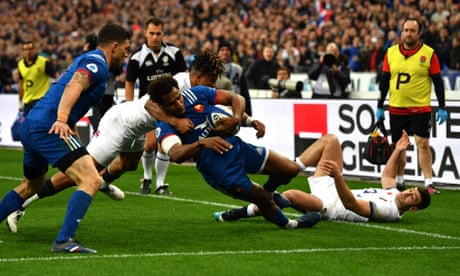 When Sean Cronin dived over the line to score Ireland’s fourth try against Scotland on Saturday afternoon, England’s task in France became that much harder, the likelihood of their winning the championship so much more remote.

The convoluted bonus point system, which has added nothing to the Six Nations but needless arithmetic, meant England now needed to score four tries and beat France even to have a chance of winning a third consecutive championship.

They would have had to follow it up with the perfect match next week, a four-try thrashing of Ireland at Twickenham, to win the title on points difference.

It would have been a wildly improbable task but Jones would have loved the challenge. He has often spoken about how he dreams of coaching the perfect game. It is one of the reasons he is still in this business 25 years after he first took charge of Randwick, back in Sydney grade rugby.

Well, even the perfect game will not win England the championship now. And the truth is that in the two years since Jones took charge they have never looked so far away from playing it. They were as off the pace in the first half here in Paris as they had been in Edinburgh two weeks ago.

Whatever solutions Jones tried in the last two weeks, they did not work. England were too busy fighting to stay in the game against France to worry about their shot at the title and they found it hard enough to score one try, let alone four. Ireland pushed hard to make sure they got their bonus point and were kicking their penalties to the corner before they were in control of the match.

The most ambitious thing England tried in the first half was to let Elliot Daly take a penalty kick from deep in their own half. Which says something about how much confidence Ireland have at the moment and how little England do, too.

Jones admitted his players made the same mistakes in this game as they had in their last. They conceded too many penalties, 16 altogether, and were outwitted at the breakdown. Jacques Brunel called it out as a clear weakness, an area France had decided to target, just as Scotland did two weeks ago. And Jones admitted it was going to take time to fix. It is time he does not have, since Ireland will surely use exactly the same tactics at Twickenham on Saturday. 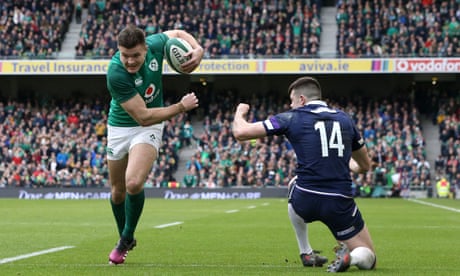 The best one can say about England is that they kept coming, just as they did at Murrayfield. Only they did not go anywhere – as if, in all the confusion, all they could think to do was put their heads down and charge harder.

They have been running in a rut of uncertain form for a while now and it has led to back-to-back defeats. Ireland, meanwhile, seem to get stronger, more confident, every week.

Their rugby has not been so very brilliant in this championship. But Joe Schmidt has been building his team all the while. He has brought through a handful of good new players who are shaping well for the World Cup next year.

So, Saturday’s game has turned into a mirror image of the final match in last year’s championship, when England won the title in the fourth round and Ireland were at a low and had already lost twice.

Ireland found enough motivation in the idea of stopping England from winning the grand slam, and proving themselves to be a better side than they had shown in the tournament so far. Jones will hope England do too, that perhaps this game can be a turning point, just like the last between the two teams.