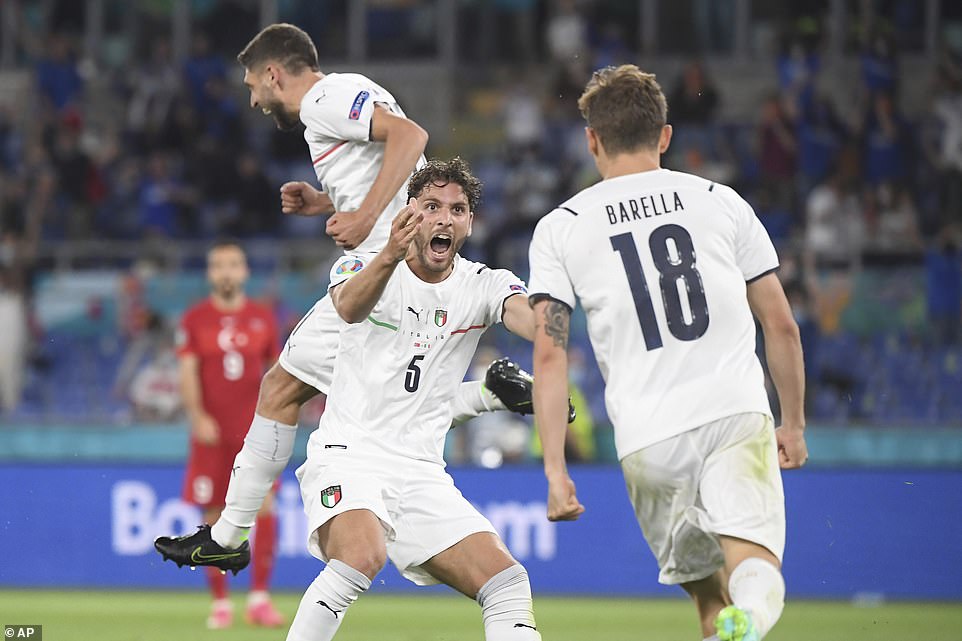 Just gone five o’clock near the Ponte Duca D’Aosta and along the banks of the River Tiber the first sights and sounds of summer tournament football were brewing.

Faces were painted and flags were flying. If not flying then worn as capes, bandanas or sarongs by the ticketed few, drawn to the Olympic Stadium by the force of anticipation, hours before kick-off.

There were cowboy hats and Mohawk wigs in Italian colours. There were air-horns, the unmistakeable sound of a vuvuzela, sirens and a helicopter circling overhead. 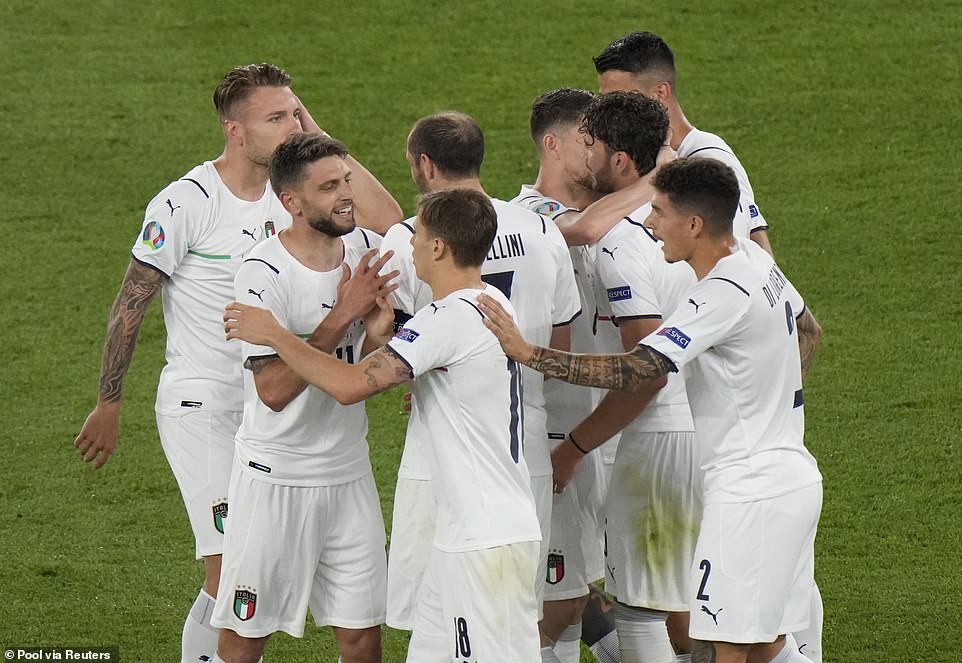 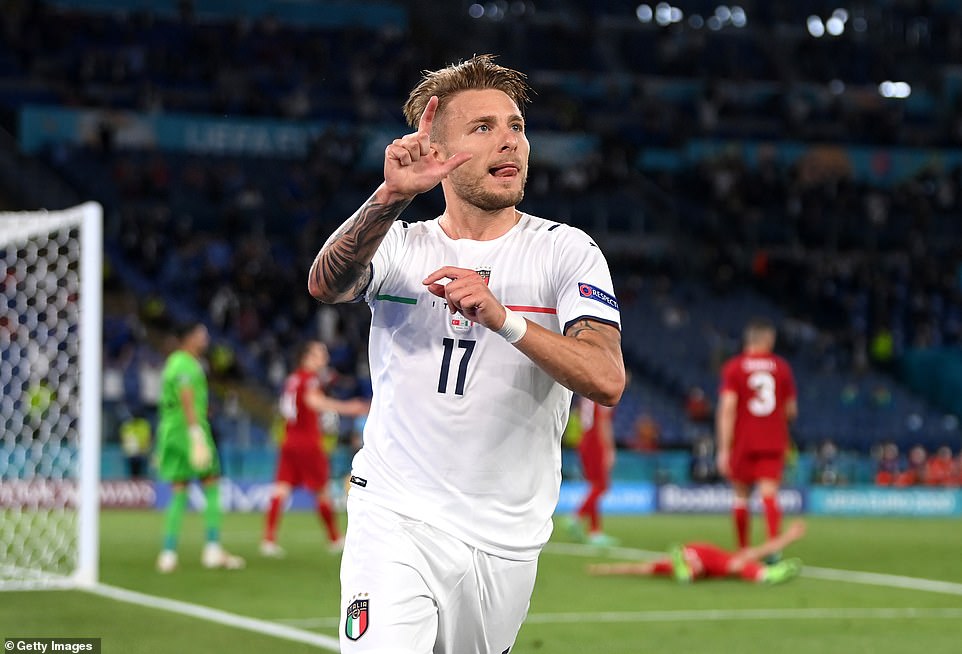 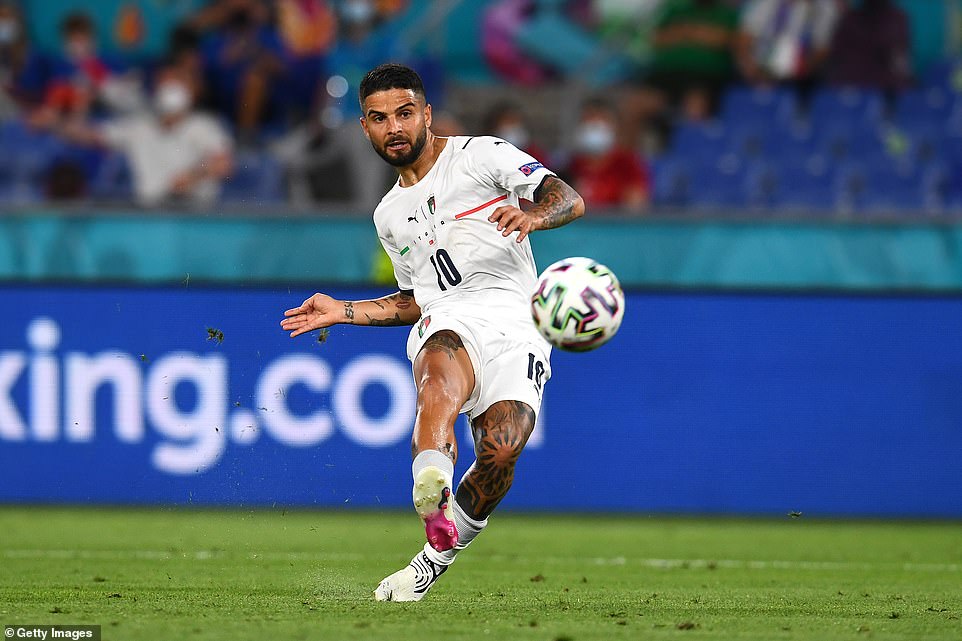 Flares smouldered, songs were sung and cold Italian lager was being drained from plastic glasses.

A noisy cluster of Turkey fans chose to accessorise their red replica shirts with plastic souvenir centurion’s helmets, complete with face guards and a fetching red crest of imitation feathers.

This was how Euro 2020 came blinking into life in Rome. One year late. A tournament that might never have been. A tournament, some still argue, should never be. 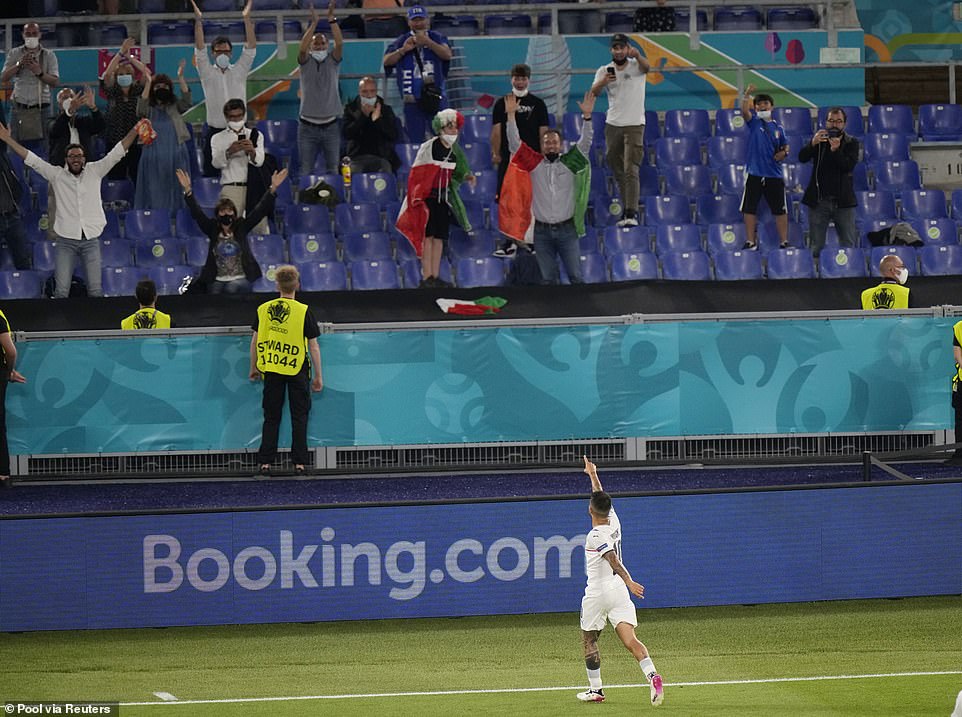 Insigne wheeled away to celebrate with the Italian supporters at the Stadio Olimpico after 16,000 fans were allowed entry 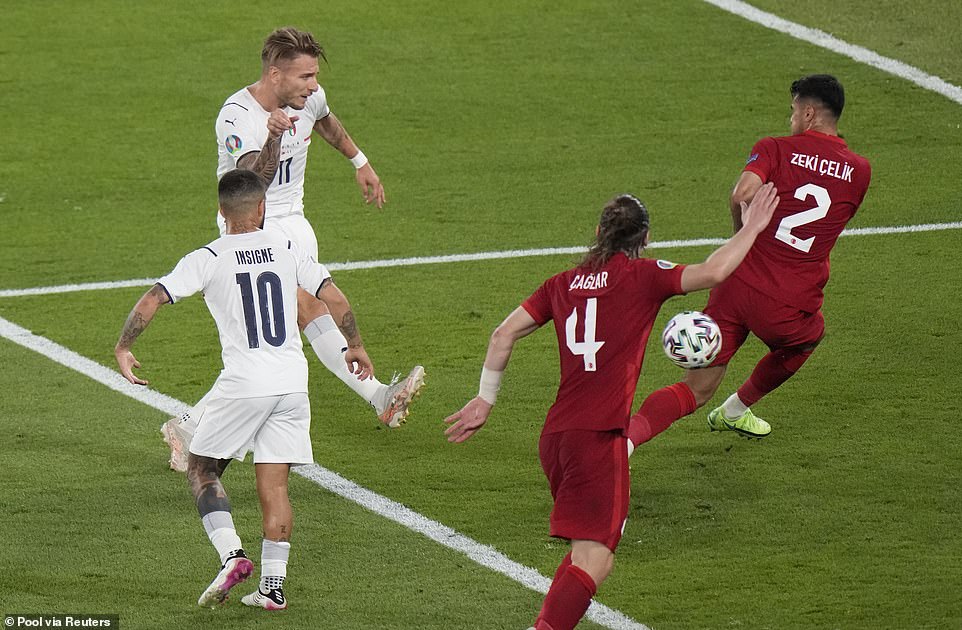 But here it is. Football is delivering another staging post to more normal world. Let the first games in a post-Covid world begin. Bring a face covering and don’t forget to sanitise.

Ciro Immobile rapped the ball into the side netting within three minutes. The atmosphere was still crackling from the anthems and smoke lingered from an opening ceremony featuring a fireworks, a military band, oversized balloons and drummers suspended from the roof by wires.

The pre-match show was stolen, however, by star tenor Andrea Bocelli and his soul-stirring performance of Nessun Dorma which rendered anyone old enough to recall Italia 90 on the brink of tears. 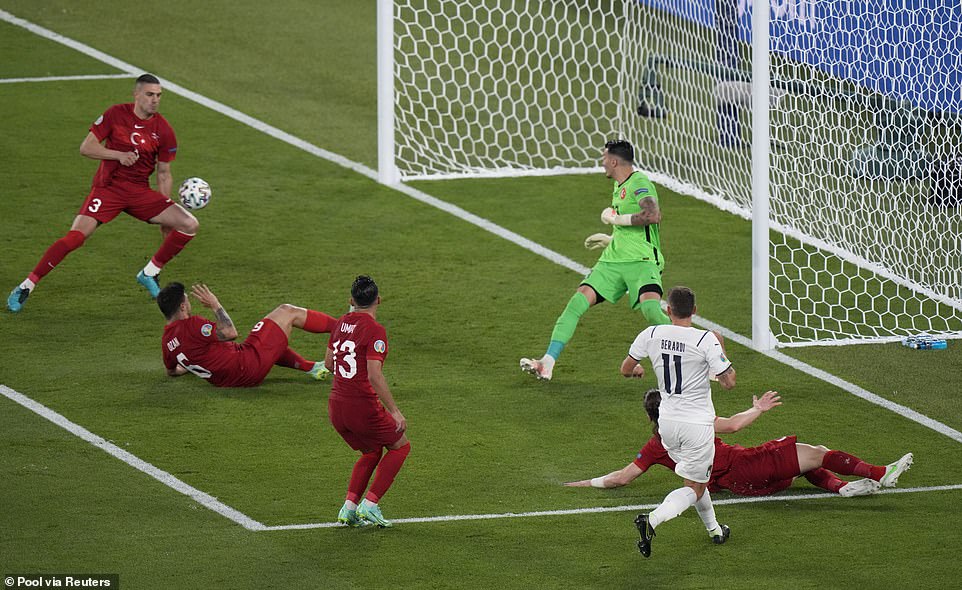 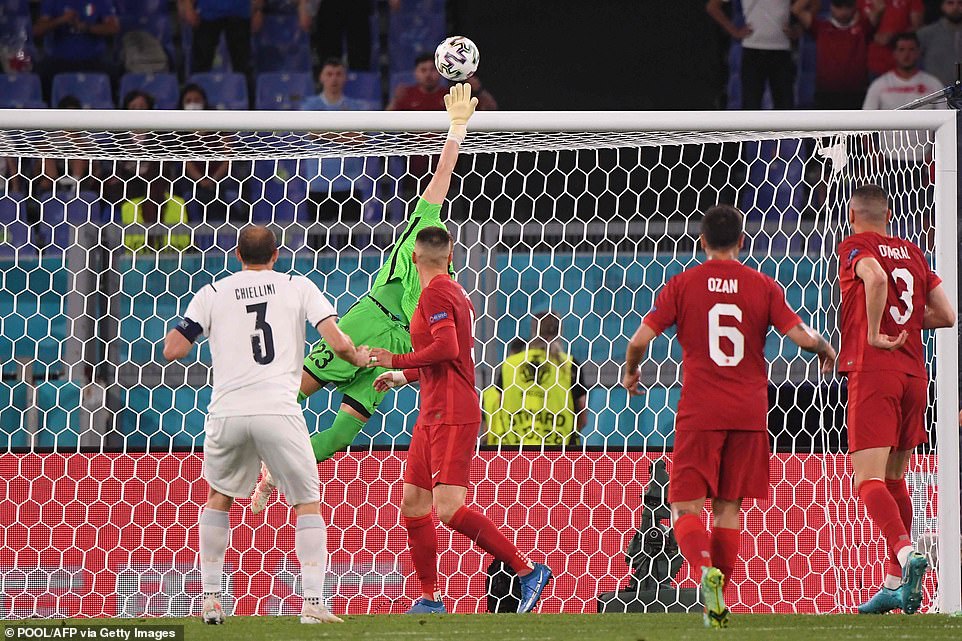 Roberto Mancini’s team rode into the contest on this wave of emotion. They are once more firmly in the hearts of this football-mad nation having banished memories of the World Cup flop in 2018, when they failed to make it to Russia.

‘Dopo la s-ventura inizia l’avventura’ read one banner paraded by fans who seemed quite pleased with themselves. Quite right too. ‘After the misfortune the adventure begins’, is the translation. Note the cheeky word-play dig at the coach who oversaw the failure, Gian Piero Ventura.

Under Mancini, they came into last night’s game with an unbeaten run of 27 games and the country was firmly behind them as they launched a bid for a first European title since 1968.

‘We are all blue,’ roared the headline above a heart-shaped image of all the players, the message, ‘Rome embraces the national team’ and a quote from Mancini to say, ‘We honour the shirt.’

Then they went and played in white, for some reason. Turkey were nominally the home team but the marketing department must have won the argument on the Azzurri’s big day.

Italy dominated the midfield, moved the ball with slick sequences of passing and squeezed Turkey back into their own third, albeit without finding the goal to seize control.

Turkey, too, arrived with confidence, impressive form and a vocal following. The red shirts of their fans popped out from the blue seats in the north west corner of the stadium.

Their stout defensive resistance frustrated Italy, who had 13 attempts at goal in the first 45 minutes, and the energy pulsing through the night gave way to tension as half-time approached.

Insignie, looking to curl a shot into the far corner from the edge of the penalty area, pulled his effort straight into the gloves of Cakir.

There were increasingly desperate appeals for penalties for handball. The third when a cross by Leonardo Spinazzola struck Zeki Celik on the hand was long and loud.

Dutch referee Danny Makkelie waited for the video check and played on.

The disappointment vanished when Italy forced the breakthrough only eight minutes into the second half when the Turkish defenders forgot how to track and trace.

Domenico Berardi burrowed deep into the penalty box and crashed the ball square, into the stomach of Turkey centre-half Merih Demiral, who tried in vain to twist his torso and deflect the cross out but could only divert it into his own goal.

The pressure lifted and the white shirts poured forward freely. Spinazzola, as much a left-winger as a full-back, forced another save and Insignie dithered on a good opportunity until he was crowded out.

Cakir made a fabulous save to keep out a deflected shot by Spinazzola but the rebound fell to Immobile who converted Italy’s second of the night.

Mancini threw both fists up into the air. He knew the points were his from here. Insignie finally found the target to make it 3-0 following a poor kick by Cakir and a blur of passes to slice open the Turkish back four yet again.

Perhaps the biggest test to date for his nascent Italy side had been overcome, in the end, with flair and a flourish and there are reasons to believe they can go be a force in this tournament.

That was the mood as 16,000 slipped away from the Olympic Stadium and into the Eternal City. It was a wonderful place for the tournament to begin. Maybe it is the tournament that never should have been but only football can lift the spirits like this. And it’s back in a summer tournament style.