Antoine Griezmann has pledged his immediate future to Atlético Madrid, saying it would be a “dirty move” to leave the club after their transfer ban was upheld.

The 26-year-old France forward had been heavily linked with a potential world-record transfer to Manchester United, but any such move is off after the Court of Arbitration for Sport earlier this week upheld a ban on the club registering new players in this transfer window.

Speaking on French television show Telefoot on Sunday morning, Griezmann said: “The ruling of the CAS has come through. Atlético cannot recruit. With my sporting advisor, Eric Olhats, we decided to stay. It’s a hard time for the club. It would be a dirty move to leave now. We talked to the leaders and we will be back for next season.” 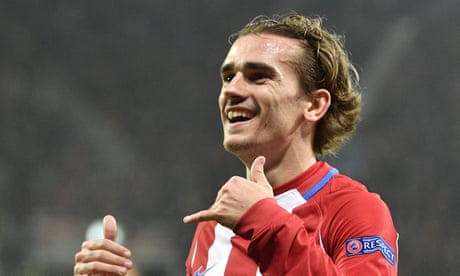 Atlético, along with city rivals Real Madrid, were handed two-window transfer bans in January 2016 for multiple breaches of global football’s rules on the registration of under-18s and both clubs failed in their appeals to Fifa last September.

The two Spanish giants then took their cases to the CAS but, while Real saw their ban halved to one transfer window in December, Atlético announced on Thursday that the only reduction they had been given was regarding their financial penalty – down from £720,000 to £440,000.

That leaves them unable to sign new players until the January window, ending the club’s bid to bring in Lyon striker Alexandre Lacazette, who was seen as a likely replacement for Griezmann.

Griezmann, who has a release clause in his contract set at €100m (£87m), scored 26 goals in 53 appearances for Atlético this past season.