It’s showtime: from Spence to Garcia 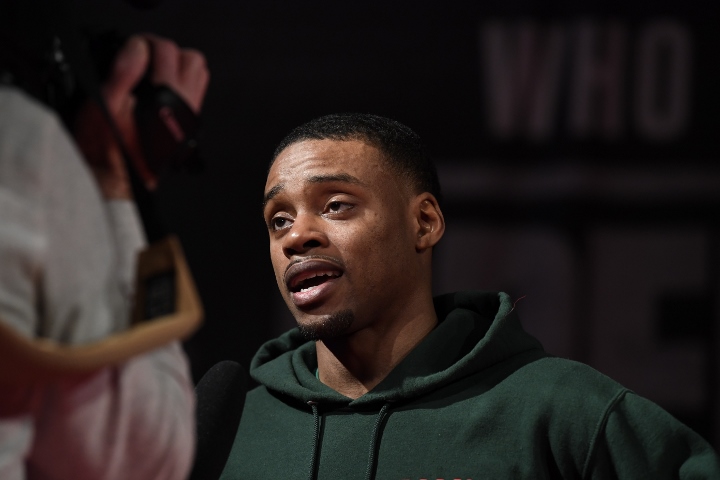 It’s just a few days away from the biggest fight of 2019 thus far and the narrative has shifted.

When it was announced that Errol Spence would defend his IBF welterweight title against IBF lightweight champion Mikey Garcia at AT&T Stadium in Texas, many worried for Garcia’s safety and wondered where his team was as the gritty Californian agreed to jump from 135 to 147 pounds against one of the sport’s best.

See, when it comes to talent, Spence and Garcia could easily be mirror images of one another. But add Spence’s height and size to the equation and all of a sudden poor Mikey is going to be in for a rough night.

At least that was the talk when the fight was made. Yet as the bout grows closer, pundits are going on record picking Garcia to win, the editorials are all about Garcia daring to be great, and the pendulum is swinging in Garcia’s direction as questions about Spence’s nine-month layoff and motivation linger.

And all of a sudden, Errol Spence stands as the forgotten man.

“That’s not something I pay attention to,” he said on a recent media teleconference.

“It’s tight enough from what I’ve seen and I can’t worry about that. I’ll just worry about what my camp thinks and how our preparation is going and my focus is 100 percent.

“I’m just ready to put on a great show. So I don’t care if that changed in his favour for all I care. It just means he’s going to get in the ring and fight.”

Don’t let comments like that fool you. Spence cares. As much of a risk as Garcia is making on March 16 by moving up in weight, Spence is putting just as much on the line when he steps through the ropes this weekend. We still like to claim him here in New York, the place of his birth, but he’s a Texan through and through and this is his town. That’s first and foremost. He’s not showing up to lose in front of family and friends.

But beyond that and beyond the actual fight, this is the night we find out if Spence can be the A-side of a pay-per-view promotion, if he can carry a fight and bring fans in both in the stadium and at home on television. He’s not a talker, he’s not flashy, but he can fight.

Is that enough for a boxing public increasingly asked to reach into their pockets to support the sport they love? Is winning enough? No. It’s how you win, and Spence is already on board with that line of thinking.

“Like I always say, it’s not just about winning,” he said.

“It’s about your performance and it’s how you win. So if I have a spectacular performance, then I do rate myself as pound-for-pound the best fighter in the world, too.”

Depending on who you talk to, that spot may already belong to another welterweight, one by the name of Terence Crawford, the WBO champion at 147 pounds. And that’s the real fight everyone wants to see in the division, not Spence against Keith Thurman or Danny Garcia or Crawford against Amir Khan.

Of course, promotional and network entanglements have been a roadblock to that meeting, but if Spence can do good numbers in his PPV bout against Garcia and Crawford can do the same against Khan, it’s really the only fight to be made in the sport, and one that could bring back memories of welterweight classics like Leonard vs Hearns and should have been classics like Trinidad vs De La Hoya – the best versus the best in their primes.

And though both Spence and Crawford have established themselves as being in the pound-for-pound best conversation, the ways they’ve gotten there are vastly different. Or are they?

Crawford is no mystery, as he wears his heart on his sleeve in every fight. If he wanted to, he could outbox anyone put in front of him. But get him angry and he’ll jump into the trench with whoever is willing to take that heat.

On the other hand, Spence comes off as Mr. Cool, both in and out of the ring, the sniper to Crawford’s Tony Montana in the closing scene of Scarface. But look a little closer and you’ll see plenty of Crawford-esque tendencies where the slightest hint of disrespect from an opponent will show a different side of the 29-year-old.

Last year, I asked Spence’s trainer, Derrick James, if he saw the same mean streak in his pupil.

“I see it in the gym every day and especially in a fight,” James said.

“I believe you have to have that to be a successful fighter. And the trigger is that he has dreams, he has desires, he has goals, and this guy is in standing in front of those dreams, desires and goals.

“I always say every fight is one more step to get him closer to where he wants to be. These guys are trying to stop him from taking that step, so he has that fire.”

Spence didn’t deny it, either.

“It’s just something I’ve always had,” he said.

“I think it’s more of a competitive nature. I’m a person that hates to lose and I probably hate losing more than I love winning. (Laughs) I hate to see someone get the best of me or that person be the better man than me.”

All that says to me is that we’re going to see Errol Spence in with Terence Crawford, we’ll see him battle Keith Thurman, and that Danny Garcia and Shawn Porter will get their shot with him too.

But first there’s Mikey Garcia, and Spence is taking him very seriously, more seriously than those detractors did when the fight was first announced.

“I think he definitely brings a lot to the table and people who say that he doesn’t stand a chance, I feel like don’t really know anything about boxing or don’t know the history of boxing.

“He does have a title at 140, that’s just one weight up from 147. So he does have experience fighting at 140. He does have a lot of skills and he is fundamentally sound. He comes from that boxing pedigree. So he definitely has a chance.”

Is that a young man making sure that people buy their tickets and order their pay-per-views on Saturday? Or is it a scary world champion letting another world champion know that he’s put in his work in the gym and he’s going to act every bit the big brother when the bell rings in Texas this weekend?

Probably a little bit of both.

“I definitely respect him for taking the fight and now that he’s rising to the challenge, he challenged me.”

Twenty-four challenged Spence before. No one’s stopped him yet. He expects Garcia to be the 25th to go home empty, and he’ll want you to write about that on Sunday morning.