Four Jacksonville Jaguars players have been detained and released after they allegedly tried to leave a London nightclub without settling a £50,000 ($64,000) bar bill.

The Jaguars are in London to play the Philadelphia Eagles on Sunday. The group are alleged to have tried to leave the London Reign Showclub in the early hours of Saturday without paying their tab. They were stopped from leaving by the nightclub’s security team and detained by police for nine hours before being released, according to the Sun.

It is understood that the club dropped the complaint after the bill was settled. The four players involved were named by nfl.com and CBS Sports as Barry Church, Ronnie Harrison, DJ Hayden and Jarrod Wilson. 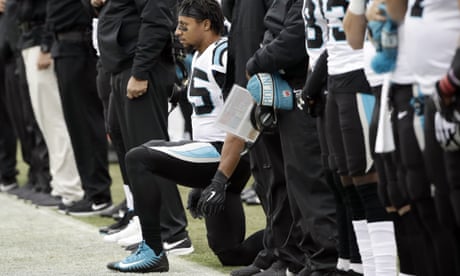 ‘A neo-colonialist sellout’: Kaepernick fractures spill on to the field

On its website, the venue is described as “an aerial show club bringing an eclectic mix of Las Vegas and Moulin Rouge to the heart of London’s West End”. It has confetti cannons, a jellyfish tank and a waterfall. On Saturday it was running a “Welcome to Gotham” themed event.

VIP tables have a minimum spend of £3,000, while bottles of champagne start at £450 and rise to a 15l nebuchadnezzar bottle for £55,000. According to nfl.com the players were sent bottles that they believed were on the house, and the disagreement occurred when they were asked to pay.

The Jaguars confirmed the players had been detained in a statement on Saturday. “The matter is being resolved and the players are with the team,” the Jaguars said. “Any discipline will be handled internally.”

The Metropolitan Police said they had been called to the venue on Saturday morning. “Officers attended and spoke with a group of males who had allegedly been attempting to leave the venue without paying a large bill,” said a spokesman. “Four men aged in their 20s were subsequently arrested on suspicion of fraud by false representation and taken to a central London police station for questioning. They were all subsequently released with no further action.”

The incident comes during a disappointing season for the Jaguars. They were expected to be a Super Bowl contender but have lost their last three games, and their quarterback, Blake Bortles, was benched last week after a series of mistakes.

London has hosted at least one NFL game a year since 2007 as part of the league’s International Series. The Eagles-Jaguars game is the third to be played in London this season, and many believe the series will eventually lead to Britain having its own NFL franchise.