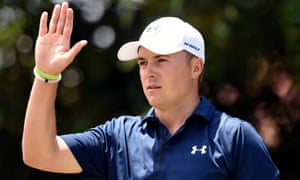 Jordan Spieth has won the Australian Open, for the second time.

In a thrilling three-man playoff at Royal Sydney Golf Club. The American sank a three-metre putt for birdie on the 18th hole to scupper the dreams of local hopes Cameron Smith and Ashley Hall on Sunday.

The trio all finished the championship 72 holes at 12 under par, with Spieth draining a nerve-wracking two-metre putt on the last just to make the sudden-death playoff. Then, in a dramatic climax, Spieth put his approach to three metres on the first hole of the playoff – the 18th – before Hall knocked his to less than two metres.

Displaying all the cool and class that helped him land last year’s Masters and US Open crowns, 23-year-old Spieth again buried his clutch putt before Hall pushed his birdie attempt right of the cup.

Spieth’s victory follows his win at The Australian in 2014 and his runner-up showing last year at the same venue. His victory is also a big win for Open officials, with the world No5 almost certain to return to again defend the trophy next year when the tournament moves back to The Australian.

In a major consolation for the joint runners-up, Smith and Hall secured starts at next year’s British Open at Royal Birkdale, as did two-time champion Aaron Baddeley, who finished in a five-way tie for fourth at 10 under, two shots out of the playoff.

After starting the day with a two-stroke lead, Ogilvy looked the likely winner for much of the afternoon before unravelling with a bogey on the par-4 15th and a catastrophic double on the easy par-5 16th.

The former US Open champion struggled off the tee all day and his hopes of a second national title – to go with his 2010 triumph at The Lakes – evaporated after he drove into the trees and couldn’t get out on 16.

While he eventually signed for a disappointing 73, Hall and Smith both charged home with final-round six-under 66s to reel in Ogilvy, with Spieth closing with a 69.