Eddie Hearn is confident a blockbuster fight between Anthony Joshua and Wladimir Klitschko can take place before the end of the year.

Joshua is currently pencilled in for a mandatory defence of his IBF heavyweight belt on 26 November while Klitschko is looking for an opponent after his rematch with Tyson Fury, scheduled for later this month, was cancelled for a second time owing to the Briton being “medically unfit”.

The fight may also be for the WBA and WBO belts if Fury is stripped of them, and Hearn says both fighters want the bout to go ahead.

“I am hopeful, both guys have it in their mind that that is going to be the next fight,” the promoter said.

“There are plenty of hurdles to overcome still, and day by day, we are ticking each of them off, and I think there is a real expectancy from all sides, now, that, that will be the next fight.

“Can we push that back to December? I’d like a little bit more time, that’s a possibility as well. Wladimir Klitschko against Joshua is the most likely scenario.

“There are less lucrative ones Klitschko could take, some easier ones, definitely. Klitschko has been training for 12 months, he has got the bit between his teeth, and he wants to fight.

“The Joshua fight is probably the biggest out there in the division right now, and it is a great fight – a young lion coming through against the master.

“Is it too early for Anthony Joshua? Maybe, but isn’t that what makes it exciting? Anthony is ready for the fight and wants the fight. Wladimir wants the fight and all being well we can overcome the inevitable hurdles that come with a magnitude of this fight.” 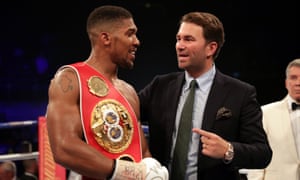