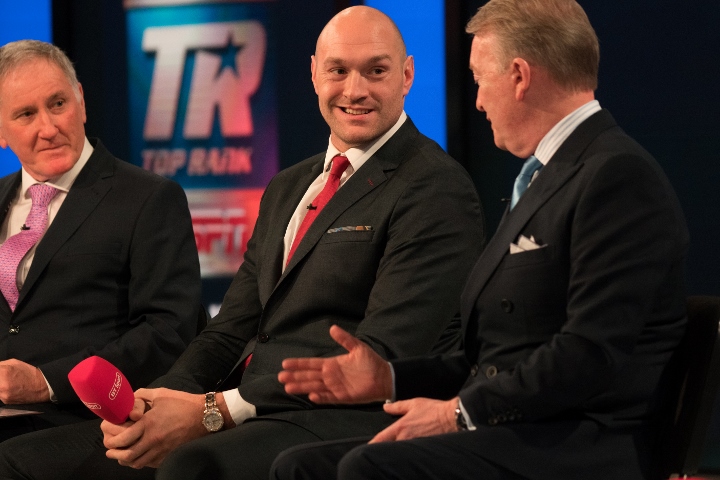 Joshua is back in the ring on June 1 at Madison Square Garden in New York City. He faces undefeated contender Jarrell Miller of Brooklyn.

“I think it is an entertaining fight between two dossers, really. Yeah, it will be good for a giggle. Won’t it? Two low-level bums fighting it out on that stage, that level, with 12,000 people watching. It should be good.

“We all need a bit of bill-filling don’t we, not everyone can top the bills in LA,” Fury told IFL TV.

Fury fought to a controversial draw with WBC heavyweight champion Deontay Wilder back in December at Staples Center in Los Angeles, California.

He was in line for an immediate rematch with Fury – but that now appears to be in doubt with Fury signing a contract with Top Rank and ESPN.

Prior to securing Miller for the date, Joshua was trying to line up Dillian Whyte for a rematch. The two were unable to reach a financial agreement.

According to Fury, in the aftermath of beating Wilder in a rematch he would be willing to give Whyte a crack at the WBC gold.

“I blame Eddie Hearn for the fights not happening to be honest, it’s not Dillian. Dillian wants to fight anybody. He is the most improved fighter over the last two years I’ve got to say, congratulations,” Fury said.

“He deserves a world title shot for sure and when I beat Wilder in my next fight, I will give you the shot no problem.