Joshua: the calm before the storm

At first glance the EIS in Sheffield is just like any other leisure centre. There are mums escorting soggy-haired kids from the pool, couples getting lost looking for the badminton courts, wilting sandwiches for sale at the cafe. No one would guess that upstairs, behind the basketball courts, is the training camp for a world heavyweight champion.

Anthony Joshua has chosen the English Institute of Sport as his base before Saturday’s superfight with Wladimir Klitschko and, no, it’s not just a leisure centre. The EIS is also a high-performance centre for Team GB, where athletes from sports including diving and paralympic table tennis, as well as boxing, are coached and monitored. But that is not to say that the place is flash. In the boxing gym there are four rings, scuffed and bearing faded London 2012 logos. There is a basic gym set, the centrepiece of which is a massive tractor tyre. There are health and safety messages everywhere.

This has been Joshua’s base for 10 weeks and it sits in marked contrast to that of Wladimir Klitschko, his opponent at Wembley Stadium. Dr Steelhammer has relocated to a lair of luxury in the Austrian Alps, a place called Stanglwirt where the suites have open fireplaces and staff will analyse your “body age” for just €60. 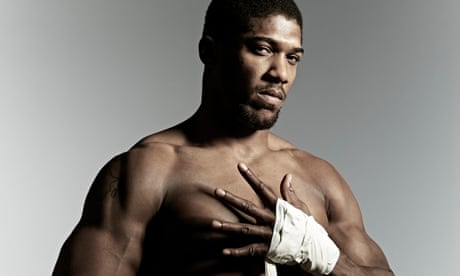 Anthony Joshua: ‘Being a boxer you have to be a man of the people’

The contrast is surely not accidental. Every fight needs a story and in the absence – so far – of any trash talking the disparity between Klitschko’s Alpine retreat and Joshua’s student digs sets up a nice juxtaposition. Visiting Joshua at his camp, though, as he breaks a self‑imposed media purdah, it becomes apparent that the line between image and reality is not clearly defined. Joshua is obviously at home in Sheffield, the place that helped take him from late-developing prospect to Olympic gold medal winner.

“What I’ve learned about myself is that when I’m embracing it, when I’m smiling, when I’m touching people, when I’m appreciating the support, I feel good,” says Joshua. He is reclining against the ropes of the gym’s main ring while, all around him, young fighters are milling around, stretching or waiting for training to resume. “Look at the gym,” he says, “it’s this busy every day. When I come in and we’re sparring, when we’re training and I’m spudding people, I feel as I do in the ring. It’s the same principle.”

To say that Joshua appears relaxed in his second home would be an understatement. Dressed from head to toe in black Under Armour gear (his main but far from only sponsor), Joshua’s body language is that of someone who has just come out of a spa at Stanglwirt, not been training three times a day for the past three months, on a precision diet of complex carbs and protein drinks. He is constantly laughing and joking, especially with his promoter, Eddie Hearn. His tone is the same regardless of what question has been put to him and his favourite response to anything tricky is a slow “interesting”. 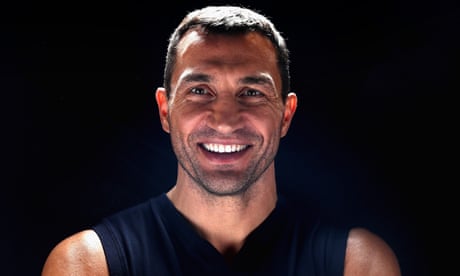 Wladimir Klitschko: ‘This may sound arrogant, but I am like Mount Everest’

In the midst of all this calm, how will Joshua dig out the aggression necessary to defeat the former WBA, IBF and WBO champion? “It’s interesting,” he says. “I’ve always got it but I retaliate more. It probably [comes out] when you get hit with a jab and you think: ‘Yeah, all right, cool.’ When someone throws a bit of petrol on the fire, you flare up a bit, I think that’s what happens.” And how do you maintain control when the aggression is released? “It’s all this training, all this training.”

Joshua v Klitschko is only the third fight in history – and the first staged outside the US – to be shown in the US on both the pay-per-view rivals HBO and Showtime (the other fights were Lennox Lewis v Mike Tyson and Manny Pacquiao v Floyd Mayweather). Hearn believes it is the narrative that sold the fight, that the contest is like “two lines of a graph: Is it too early, or is it too late?” He too draws attention to Joshua’s apparently preternatural calm. “It’s the legend versus the young lion. Anthony is cool right now but will he crumble? One of them is going to get found out. And it will be at Wembley Stadium in front of 90,000 bloodthirsty fans.”

Joshua, 27, says he wants to fight for another 10 years and maybe, just maybe, he’ll be in the game as long as the 41-year-old Klitschko. “You’ve got to check your health,” he says, “because at that age getting punched in the head is not good.” But while the young lion has many ambitions still to fulfil (not least of becoming boxing’s first billionaire, a claim that has particularly intrigued Klitschko), migrating away to the bright lights of Las Vegas is not one of them.

“It used to be [an ambition], but it’s not any more,” Joshua says. “You have to go to America to get respected? No, not any more. Come here. Come and fight us. British boxing is booming. It’s amazing how the tables have turned. Not only for me but I’m telling you that the guys coming up are phenomenal fighters as well. I’ve seen them all and I think there’s some real stiff competition coming through in Great Britain.”

At this Joshua points at his peers across the dog-eared, jam-packed gym. “It’s the era of UK boxing. I’m not holding on to it myself. Everyone’s welcome.”