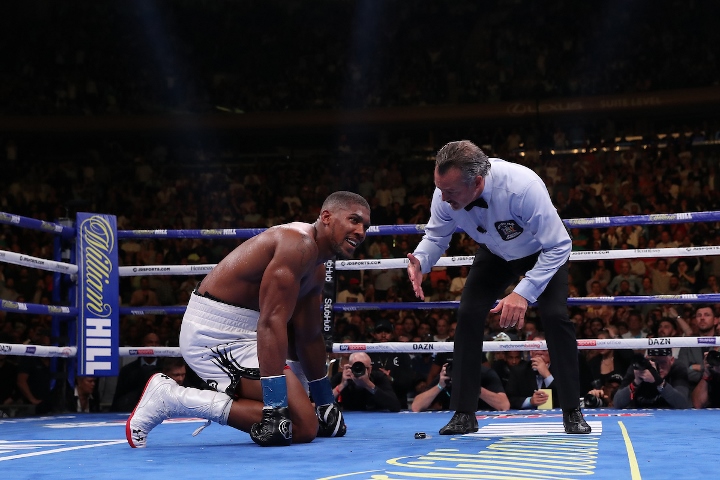 Eddie Hearn, promoter for British superstar Anthony Joshua, explains that his fighter was completely scrambled after the third round of last Saturday’s fight with Andy Ruiz at Madison Square Garden in New York City.

Joshua, who had just dropped Ruiz in third, was then rocked and dropped hard, twice, in the same round.

The fight played out for four more rounds, before Ruiz scored two more knockdowns in the seventh round to secure the stoppage – and win the WBO, IBO, WBA, IBF heavyweight titles.

The contest was Joshua’s debut in the United States and he was a massive favorite to win the contest.

Hearn explains that Joshua was so rattled in the third, that he barely remembers anything after that first knockdown.

“He doesn’t remember anything really from the third round. In fact, he’s taken a little positivity that he managed to go four rounds after that because he says, ‘ya know, my senses weren’t there,'” Hearn told DAZN.

Some Joshua fans were angry at the stoppage, claiming the referee had acted a bit too early.

Not so, says Hearn. He points out how Joshua was physically and mentally spent at that moment, and was easily pushed back by the much smaller referee.

“100% right stoppage. If you actually watch it back, we were watching it last night, and Anthony says ‘yes,’ and goes to walk forward, and the ref just nudges him and he goes back on the ropes, and then the ref stops it, and I’m actually glad he did cause Anthony would’ve kept going all night,” Hearn said.

Hearn and Joshua have exercised an immediate rematch clause, and the second fight is expected to take place in the fall – likely in the UK.