Kaepernick has America’s attention: what now?

Colin Kaepernick has taken a stand that he cannot walk back. He says “I’ll stay seated for national anthem until racial oppression ends”.

He has announced himself as a rare, strong football voice on social issues, using his standing in America’s game to address some of the country’s most shameful inequalities.

He says he wants to start a conversation in the San Francisco 49ers locker room and, God knows, sports teams need to talk about more than how to make a pile of money.

But his most important move will be what he does next.

It’s one thing to spark debate by refusing to stand for the anthem, but the quarterback now has to take meaningful action if he is to fight injustice.

Indeed, it’s one thing to spark debate by not standing for the national anthem and repeating a few statements about “people being murdered unjustly” and “what’s really going on in this country”. It’s another to actually make a difference. That’s where the real work comes.

That means talking every day about serious issues such as police brutality, racial stereotyping and a system weighted toward the rich.

That means convincing other athletes to join in.

That means going to rallies and protests and city council meetings and demanding to be heard.

If Kaepernick is going to be the voice against racial oppression he wants to become, he will have to do more than refuse to stand for the national anthem. Otherwise, last Friday’s protest will be remembered as an odd and awkward gesture that drowned the substance of his points. 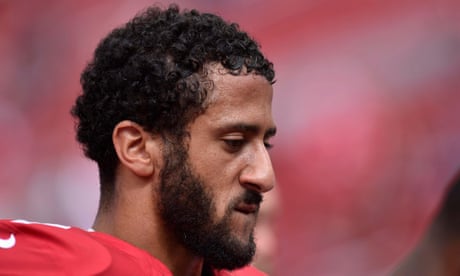 Great leadership can come at odd times. And it may very well be that at 28 years old, in his sixth NFL season, Kaepernick has found his voice.
One former NFL player who has tried to motivate athletes to take action on racial inequality, told the Guardian on Monday that he was impressed with the way Kaepernick used the Star-Spangled Banner to make his stand, given the song was written by Francis Scott Key, a man who believed African Americans to be inferior to whites.
He said he hopes Kaepernick will be as thoughtful in his messages going forward, directing players of all races to confront problems many would rather avoid.

“I think he’s making the bet that other players will get behind him,” the former player said.

“That’s the only way this moves on.”

Then the player paused. Because even he, out of the league for a few years, understands the concern that many players have about Kaepernick – that he is not a natural leader. That even though he plays the biggest leadership position on the field and once took the 49ers within yards of winning a Super Bowl, he has been a distant presence in the locker room.

Coaches have always raved about his intellect but he’s also been seen as aloof, not the kind to front a movement. His performance has deteriorated to the point where he lost his starting job last season and has done little to win it back.

If he stays on with the Niners, he will most likely be a backup. That is a far drop from being one of the league’s best young quarterbacks as he was in 2012 and 2013.

There is a worry among some of those who want Kaepernick to succeed that he lacks the stomach for the fight ahead. Some wonder if he is confused by his falling star and is lashing out in frustration.

That would be unfortunate because Kaepernick has already shown the power of his voice. Even those angered by his refusal to stand for the anthem have been forced to discuss his right to sit and the issues he raised.

He has ignited the conversations he talked about starting, including inside his own locker room. On Sunday he said the team asked him to stand up at their meeting and explain his points. He said players listened.

“That’s what our focus is. But in our free time, we have conversations about this.
“That’s not something that we should be ashamed about or shy away from. We talked about football, we handled our business there but there’s also a social responsibility that we have to be educated on these things and talk about these things.”

Players should be listening and they should be talking. Professional locker rooms have long been apolitical places – at least on the surface – given the kind of money at stake both in salary and endorsements. Few players want to risk a payday by speaking out on uncomfortable subjects.

As an example, Philadelphia Eagles rookie Myke Tavarres said on Monday he too would sit during the anthem before his team’s preseason game with the Jets until it seems either his coaches or agent talked him out of it.

Kaepernick has received plenty of support to go with the mountains of criticism he has received. And yet sympathetic texts or expressions of encouragement are not the same as action.

There’s an excellent chance Kaepernick might be left on his own in using the anthem to highlight serious problems in America.

In many ways, his timing was all wrong.

His football standing has never been lower, given the way defenses have adjusted to him.

He also picked the week teams start making their roster cuts to make his stand.

The last days of August are the most precarious for NFL players. Many are confronting their football mortality. If there is ever a time they will not be listening to cries for social change it is over these next two weeks.

Then again, there is never a perfect time for a protest. Revolutions don’t run on schedules.

Kaepernick has awakened a country dozing through another football preseason. His biggest challenge comes with what he does next.

Will he be real voice of change NFL players need to hear or just a guy on the brink of losing his job who shouted out one night before he disappeared?