Colin Kaepernick’s workout in front of NFL scouts is off to a tense start before he even takes the field.

The quarterback’s team released a statement shortly before the workout was set to begin, announcing that the location was being moved to allow the media to watch and film the event in order to maintain a “transparent and open process.”

Here is a statement released by Colin Kaepernick’s camp as they relocate the workout today. 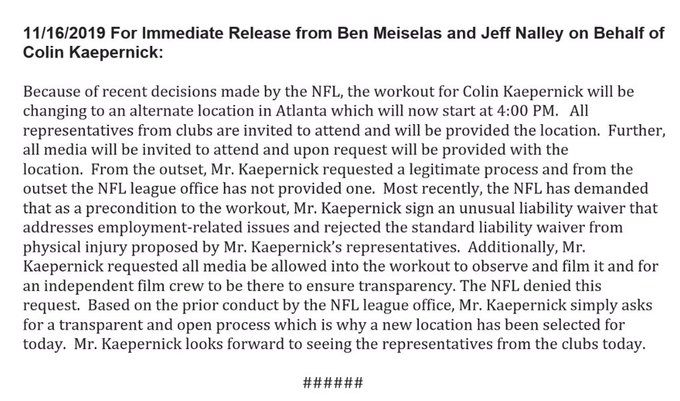 Per a source, this all boiled down to Kaepernick wanting the public to see the workout and everything that happened with their own eyes. When the NFL refused to allow that, plans were made to move it to an open venue where anyone/everyone could judge the quality of the workout.

Source says Colin Kaepernick’s workout is being relocated after he requested that media and cameras into the venue for transparency. #NFL refused to allow it, so it will be moved to another site in Atlanta this afternoon. It will be open to the media and NFL reps as agreed upon.

3.) When #NFL refused to allow Kaepernick to tape the workout and control their own copy, Kaepernick asked that media be allowed into the workout to view/record the session. NFL said no. That’s when Kaepernick felt the league refused to be transparent and asked to change venues.

4.) It’s now up to the #NFL teams to decide if they want their reps to relocate to the new venue. They have been invited on-site in Flowery Branch. The new location will also make it far easier for teams to access the local airport, meaning NFL reps can attend and easily fly out.

The NFL originally denied a request on behalf of Kaepernick for a public workout, which led to the location change.

Kaepernick’s statement calls into question the legitimacy of the workout and points out that the league demanded him to sign an “unusual” liability waiver. The workout was scheduled to take place at the Atlanta Falcons facility, where a small amount of protesters and supporters of Kaepernick had gathered outside Saturday morning.

NFL scouts began arriving at the facility as Kaepernick’s team released the details for the change of venue.

The scene at the Falcons facility. Rental cars & scouts still arriving. Nobody knows anything.

Representatives of at least 20 NFL teams are expected to watch Kaepernick run through drills — and there is already a fair amount of skepticism across the league about the seemingly rushed nature of the setup.

Former NFL coaches Hue Jackson and Joe Philbin will be running the event on the field.

Update: The NFL has released a response to Kaepernick’s decision.

NFL’s response to Colin Kaepernick opting to do his own workout today in Atlanta: 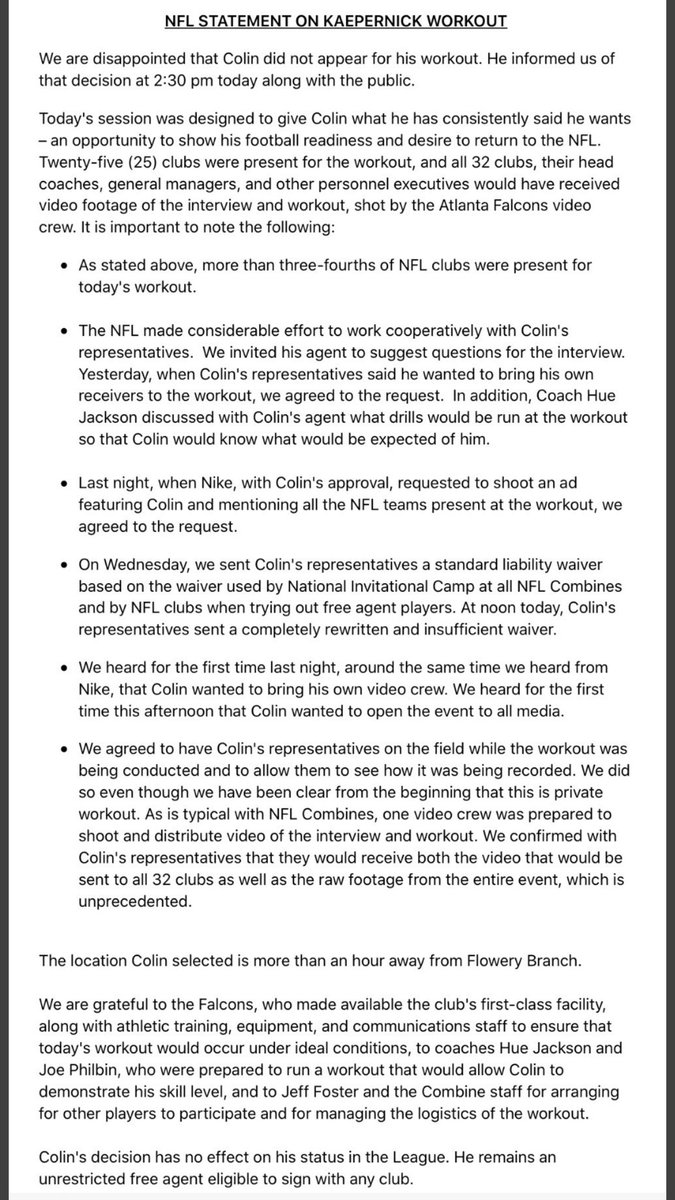