Kareem Hunt to get second chance in the NFL

Somebody was going to pick up Kareem Hunt eventually. There was only so long a 23-year-old running back who led the league in rushing as recently as 2017 was going to remain without a team. Perhaps this was the most damning aspect of the Cleveland Brownsmaking the move to sign a player caught kicking and pushing a woman on video: that there wasn’t much surprise involved.

On Monday, the Browns announced they had signed Hunt, reportedly to a one-year contract. It was only November, mind you, that the Kansas City Chiefs released the player after TMZ uncovered disturbing footage of the incident, for which Hunt was not arrested and did not face charges.According to ESPN, the NFL has not finished its investigation into the matter and Hunt will remain unable to play until the league makes a final verdict. When Browns owner John Dorsey was asked about his team’s stance towards violence against women, he responded: “I’m not going to be the spokesperson for the organization with regards to that.” Well, that should cover that. 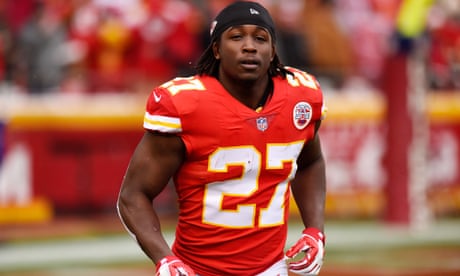 Tellingly enough, the initial reaction to the move was surprise that the Browns were involved. Cleveland, after all, already have Nick Chubb on the roster, and he averaged 5.2 yards per carry last season. In fact, they traded away Carlos Hyde to give Chubb the ball more often. It felt like the Browns were taking an unnecessary hit to their image by signing a controversial player when they already had his position filled.

Of course, maybe the Browns are gambling that there’s not going to be much of a backlash. Sure, they face some negative headlines now and they will certainly get some pushback if and when Hunt is cleared to play, but sooner rather than later that will eventually die down. At this point, teams have realized that a certain amount of “outrage fatigue” among fans and commentators alike eventually set in. The news cycle will move on.

If history tells us anything, this is how the scenario will play out. If Hunt returns to playing like he did in Kansas City, then he will be described as “troubled” and announcers will vaguely refer to “off-the-field behavior” during broadcasts. And if Hunt keeps his nose clean for long enough, and continues to put up big numbers, all involved can spin his story as a comeback narrative. We’ve seen it happen plenty of times before, and in other sports besides football.

Of course, not everybody gets a second chance, although some believe a zero-tolerance approach to violence against women can make the problem worse. Running back Ray Rice never returned to the league after the Baltimore Ravens released him after video emerged in 2014 of him knocking out his then fiancee at an Atlantic City casino. Although a similar incident, there were different circumstances. First of all, and probably most importantly for NFL teams, Rice was on the downside of his career: running backs have notoriously short shelf lives. Secondly the whole affair was an embarrassment to commissioner Roger Goodell. The NFL initially banned Rice for a mere two games but then expanded it to an indefinite suspensionafter widespread public outcry. Rice appealed the suspension, and was eventually reinstated, but has not played in the NFL again and said in December he was “done with football”.

In sharp contrast to the whole Rice fiasco, we have the story of Colin Kaepernick, who continues to be denied a second chance at an NFL career even though his “crime” has been one of silent, peaceful protest. Kaepernick is currently suing the league, arguing that his case amounts to collusion between the teams and, given the quality of quarterbacks that teams have turned to during his absence, he has reason to think he has a solid case.

Yes, you’ve doubtlessly heard this a dozen times before by now. At this point, it’s almost a cliché to bring up Kaepernick whenever an NFL player who has committed a legitimate, serious infraction returns to the league after a laughably short amount of time. It feels like it’s risking yet even more outrage fatigue to point out every piece of evidence which suggests that the owners have shown that they care far more about trying to avoid getting on Donald Trump’s bad side than they do about seriously addressing how to deal with violence against women.

At this point, it feels like everyone has already made up their minds about whether or not there’s a double standard going on with Kaepernick, and one more example isn’t going to change things. It’s exhausting, really, to point out the hypocrisy of the NFL on yet another occasion. Still, it feels necessary to do so, even if another opportunity is almost certainly around the corner.