Kerber powers past Serena for her first Wimbledon title

Tiger Woods and Serena Williams could spend hours talking about struggle and pain – as African-American athletes in historically white sports, and champions searching in the autumn of their careers for the magic that made them great.

Woods, rebuilding his golf career at 42 after a string of back operations, stopped off at Wimbledon on his way to the Carnoustie Open and was a quiet presence at the back of her team’s box as seven-times champion fought like a tiger but could not quieten the ferocity of Angelique Kerber, six years her junior and a new Wimbledon champion.

The 30-year-old German, one of the defensive masters of the modern game, played superbly to take the sting from Williams’s serve and won 6-3, 6-3 in 65 minutes that seemed to pass way more quickly than that. Perhaps the energy-sapping men’s semi-finals that had gone before had warped our perspective of time.

Nearly 11 months after giving birth to her first child, Olympia, and just 14 matches and two slams into her comeback, Williams more than justified her 25th seeding, but she could not sustain her run when it mattered against a tenacious and clever opponent. Too often, the American butchered simple winners and, although straining at full bore, she could not locate the killer power she had shown for most of the fortnight.

She remains on 23 grand slam titles, one short of the all-time record of Margaret Court – just as Woods most likely will find it difficult to advance from 14 majors, four behind Jack Nicklaus. Time is not their friend.

Chris Evert, never afraid to speak her mind, sought to give Williams comfort by observing of Court: “She won 11 Australian Opens when nobody was going down there, because it was during Christmas – so let’s just get that out there.”

This was the first thirtysomethings final here since 1977, when Virginia Wade beat Betty Stove, and the fourth in the Open era won by a mother – after Court, Evonne Cawley and Kim Clijsters.

Kerber broke after three minutes, Williams dumping a forehand. The American was curiously off-key until she banged a backhand winner to hold and then broke the German to love. But again she could not put together a solid run of points, a forehand floating long in the seventh game. 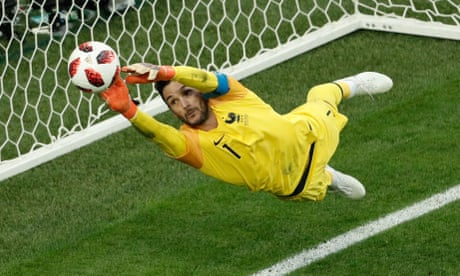 She handed Kerber set point on the half-hour, then the first frame with a backhand that billowed the net.

There was a ton of fight in her still, mind. She scrapped for a hold from two points down at the start of the second and, when she smashed a volley to within inches of Kerber’s head in the second game, the German looked distinctly unamused.

As hard has Williams strove to break Kerber’s rock-solid defence, she had to red-line to stay with, and having struck 44 aces to get to the final, she could conjure only another four. Kerber rifled an unreachable forehand up the line, at 80 miles an hour, for 4-2, and, in less than an hour, was within sight of her a first Wimbledon title, to go with triumphs at the Australian and US Opens two years ago.

She held for 5-2 and Williams needed the tennis equivalent of a hole-in-one. At the end, her legs, already heavy from the lateral running Kerber made her do, was drained but not deflated. She gave her conqueror the warmest of hugs, looked up to her box and smiled.

Often in the past, defeat has wrecked her. She has maybe reached a more philosophical stage of what has been a wonderful career, and might yet be gilded with another few trophies. Just getting this far after all she has been through over the past couple of years was a considerable achievement.

Although she did not have to beat a top 10 player to get here, that in part was due to the elite squad’s self-destruction before the quarter-finals. She, never the less, rises to 28 in the world from 181, back inside the seedings corral. Victory lifted Kerber to No 4 in the world, and she will frighten everyone around her for the foreseeable future.