The grass grew, the sun set, governments fell, empires crumbled, and John Isner and Kevin Anderson played tennis. Ace after ace, game after game, hour after hour. There were spectators on Centre Court who grew new beards, ballboys who walked off as grown men. Anderson won, but after six hours and 36 minutes, he wasn’t happy about it. The fifth set, which finished 26-24 in two hours and 55 minutes, was a cruel and unusual punishment, and Anderson made a desperate plea for the officials to please, please put the players out of their misery and start using fifth-set tie-breaks. After all, they shoot horses, don’t they?

Anderson, though, is going to have to do it all over again on Sunday. He seemed to be overcome with survivor’s guilt. “At the end I feel like it’s a draw between the two of us, but someone has to win,” he gasped, “John’s such a great guy.” They are old friends from the college circuit and the main thing Anderson seemed to be thinking in the aftermath was “why am I the lucky one?” He even apologised for not being more excited about winning. “But I’ve got so many mixed emotions. All I can say is congratulations to John on such a great tournament. Hopefully he can come back stronger.” 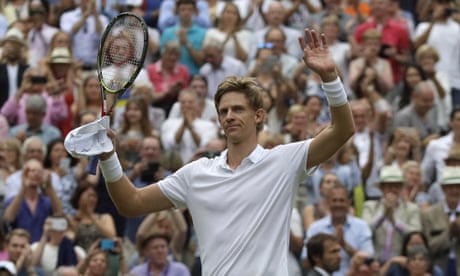 Isner seemed to spend a lot of the match having flashbacks to his three-day ordeal against Nicolas Mahut in 2010. That match lasted 11 hours and five minutes. Next to it this one, the second-longest in Wimbledon’s history, was a light workout. But Isner had the haunted look of a man who has just been called up for another tour, the Die Hard vibe of a guy who could not quite believe this shit was happening to him all over again. By the time it was over he was too exhausted to even reach for the ball.

It wasn’t clear who, exactly, benefitted from all this. Anderson was a broken man. He had already gone through one long fifth set against Roger Federeron Wednesday. He’s played 11 hours of tennis, and covered 8km of court, in three days. And now he has a single day to recover before he has to play in his very first Wimbledon final. That was the one consolation for Rafael Nadal and Novak Djokovic, who spent the afternoon waiting, wound up, racked with nervous tension, in the locker room. They must have been exhausted before they even made it onto court.

And theirs, of course, was the match everyone had come to see. Centre Court was half full for the first four sets because so many fans had decided to take a long lunch before they took their seats. Anderson v Isner was the appetiser that turned into a banquet no one wanted to eat, its fifth set the wafer-thin mint. There were shouts of “We don’t want this to be 70-68, John!”, “Get a shift on!” and “We want to see Rafa!”

Even Isner’s coach Justin Gimmelstob seemed to give up on it in the end. Gimmelstob spent the first four hours jack-in-the-boxing out of his seat, shouting and screaming in celebration of every hard-won point. Until deep in the fifth set, when he seemed to be in the throes of a savage comedown and sat patting his hands together, a thousand-yard stare on his face. 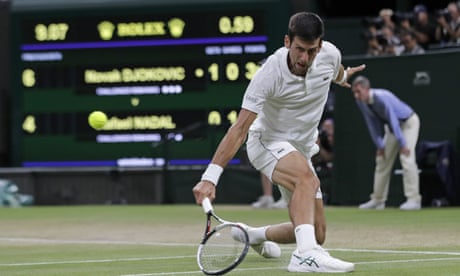 Novak Djokovic edges ahead in Wimbledon clash with Rafael Nadal

Anderson and Isner, these two great gangling men, were so closely matched that their stats at the end of it all were nearly identical. Anderson hit 49 aces, Isner 53; Anderson got 71% of his first serves in, Isner 75%; Anderson averaged 124mph on his first serve, Isner 125mph. And the first two times Anderson broke Isner, Isner broke him right back. The only way to split them in the end was to wait and who fell apart first. And Anderson was just that little bit tougher. There was one point, at 24-24 in the fifth, when he fell over, dropped his racket, got back to his feet and played his next shot left-handed.

For his own part Isner did make one brief experiment at changing his routine. He had had his hat on backwards for the entire match, but switched it around and immediately slipped to 15-40. So he flipped it back around again. Out of any better ideas he battered another couple of aces and closed out the set. “I can’t say enough I think the rule needs to change,” Isner said again at the end. “It’s not fun.” If anyone at All England Club, or the Grand Slam board, is listening to the players it might be the last time anyone has to go through this ever again.