Liverpool remain a work in progress but it’s coming together promisingly. During Jürgen Klopp’s first campaign at Anfield the players adapted quickly to his high-energy, heavy-pressing system and regularly disrupted the opposition’s passing but they only sporadically formulated quick, incisive attacking moves themselves.

This season things have improved significantly. The pressing is still impressively efficient and remains an extremely useful way of creating chances but Liverpool’s passing interplay makes them a more complete attacking force. Their 69 shots on target this season is the most in the Premier League.

The most impressive aspect of their 4-2 victory over Crystal Palace on Saturday evening was the manner in which they filled space dynamically. This side feature various forwards who drift around – Philippe Coutinho, Adam Lallana, Sadio Mané – and with multiple players varying position there is a danger it will become congested in the centre, where they all prefer to play. That was never a problem at Selhurst Park with team-mates making a reverse run whenever a player drifted out of his natural zone. 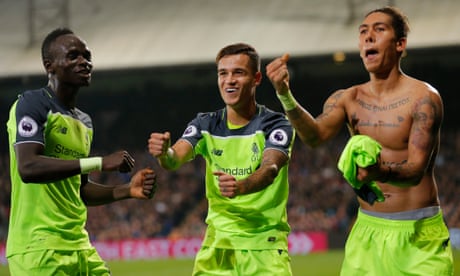 Liverpool’s opener, scored by Emre Can, was a perfect example. As Liverpool built up play in the centre of midfield Coutinho wandered inside from his left-sided role – which in isolation felt unnecessary considering Jordan Henderson and Can were patrolling that zone effectively, with Lallana in a more advanced zone.

Coutinho’s shift prompted movement from others. The left-back Alberto Moreno, making a rare Premier League start in place of the unwell James Milner, raced forward on the overlap while Can responded by charging into a goalscoring position inside the box.

Liverpool were offering movement but also balance and the goal involved all three players: Coutinho chipped a ball over the top for Moreno; he played a cushioned, sidefooted, volleyed cutback towards Can, who fired home via a slight deflection. It was a fantastic goal in itself but given the context of Liverpool’s excellent movement it felt somehow fitting.

The player who benefits most from all this movement is Coutinho. On paper the left-sided position does not particularly suit him – in a more rigid team he would be stuck in uncomfortable zones and in a less cohesive team any drifts into the centre would leave the side unbalanced – but Coutinho is allowed to take up his preferred midfield positions, often finding space away from opponents.

At times he controlled Saturday’s game, in addition to providing some incisive passes in behind. For all his talent Coutinho has sometimes struggled to offer a consistent influence on games, but his form this season has been excellent.

Good partnerships were obvious throughout the final third, however. Mané charges into goalscoring positions from his right-sided starting role, which works well considering Roberto Firmino often drops into deeper positions; Liverpool arguably play without a conventional centre‑forward but that role is always filled by someone.

When Mané vacates his zone a team-mate fills in, typically Nathaniel Clyne on the overlap but sometimes Lallana drifting right. At full speed, and combined with sharp passing, it’s a wonderful spectacle.

Nevertheless it is impossible to ignore Liverpool’s defensive weakness. The nature of Palace’s first goal – Dejan Lovren inexplicably teeing up the ball for the onrushing James McArthur to head home, was laughable and the second, when McArthur again headed home, from a right-wing Wilfried Zaha cross, also asked questions of the centre-backs.

For long periods Lovren and Joël Matip are barely exposed, courtesy of Liverpool’s pressing and Jordan Henderson’s fine work in this relatively new defensive midfield role. Both centre-backs are comfortable high up the pitch, and that aggressive positioning worked well against an aerial threat like Benteke.
Too often, though, they are simply found wanting in basic defensive situations, and the addition of the goalkeeper Loris Karius has not added any obvious authority to Liverpool are the back.

It used to be said great teams were built from the defence but Klopp is taking a very different approach. First, there was the impressive pressing high up the pitch. Next, there was the slick possession play and integrated movement.

The defensive solidity required to win a title is yet to be witnessed. On the evidence so far we may have to wait until next season before Liverpool become efficient at both ends of the pitch.