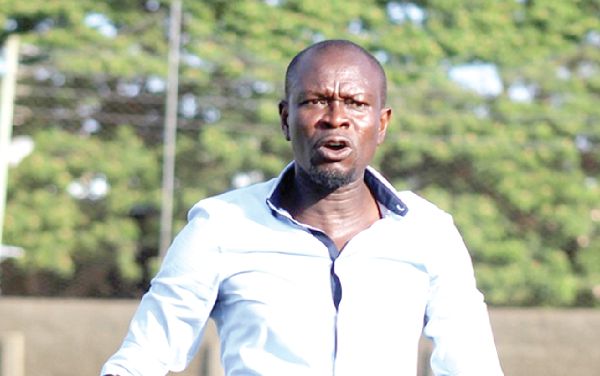 THE INSPIRATION: Head Coach, C.K Akonnor, to lead Kotoko to another victory

Coach Charles Kwablan Akonnor could be an instant hero for Kumasi Asante Kotoko if he successfully leads his charges to record a double victory against Coton Sport at the Baba Yara Stadium on Sunday and qualify for the group phase of the CAF Confederation Cup.

The Porcupine Warriors head into this weekend’s clash as favourites on the back of their 3-2 win in the first leg encounter in the northern Camerounian city of Garoua last Sunday.

Since taking over the club technical direction late last year, the 44-year-old gaffer is gradually instilling a sense of belief among his players and raising the hopes of the club’s faithful as they stand on the threshold of advancing into the group stage of CAF’s second tier club competition for the first time since 2008.

Even though the coach would be playing with a 3-2 advantage, he remains cautiously optimistic about the team’s chances and maintains the only thing that can sustain the current gain is hard work on Sunday despite the massive home support Kotoko expect to enjoy at the Baba Yara stadium.

“We have to guide against complacency because once we were able to win in front of their fans, anything is possible in Kumasi.

“Coton Sport are a great side and the fact that we came and won doesn’t mean they will allow us to have it easy in the return leg.

The win didn’t come easy and a section of the supporters have been complaining about how we play but I believe they can smile a little now,” Coach Akonnor said on the team’s return to Ghana last Tuesday.

The coach is counting on his players to repeat the dose on Sunday by ensuring they completely annihilate the Camerounians to progress to the next round of the competition.

“The players proved against Coton Sport that they have what it takes to achieve success.

But the tie is not over so our next target is to complete a double over them and this demands sacrifice,” Akonnor said.

“We’ve done one part of the job here and need to finish them in Kumasi over the weekend. I’ve advised the players not to celebrate the win now because we have a lot of work to do in Ghana.”

However, the Porcupine Warriors must expect a big fight from the Cameroun champions, despite their poor record against Ghanaian sides in continental competitions after previous losses to Accra Hearts of Oak and Berekum Chelsea.

Coton Sport captain, Kamilou Daouda, has warned Kotoko to brace for a defeat at their own backyard on Sunday.

“We believe in ourselves and the fans know what we can do.

We are coming to Kumasi to score two against Kotoko in the second leg,” the Nigerien forward told Kumasi-based radio station, Nhyira FM.

His coach, Bertin Ebwelle blamed their home loss to the absence of two of his key players, Moise Sakava and Serge Seko, but promised to bounce back strongly in the return leg clash in Kumasi.

He promised that his side would not go down without a fight despite playing away.

“It’s possible but we need hard work and luck to move on,” Coach Ebwelle said.

Kotoko will aim at keeping the Baba Yara Stadium as its fortress where they have recorded recent wins against Kenya’s Kariobangi Sharks (2-1), Ashgold (3-2) and back-to-back victories against Accra Hearts of Oak (2-0).

These results Coach Akonnor will be counting on his key players who silenced Coton Sport in Cameroun, including the captain Amos Frimpong, Maxwell Baakoh, Fatawu Shafui, Songne Yacouba and teammates secure victory and qualification.