“Twenty-six seconds! 27, 28, 29!” On this Monday afternoon in St Moritz, 6,000 feet up in the Swiss Alps, it is not only the Instagram-perfect views or the altitude that rips the breath away.

Watching Laura Muir grind out multiple sets of 200 metres in under 30 seconds, with only half a minute to recover and refill her lungs, has a similar hypoxic effect.

Finally after the 10th repetition her coach, Andy Young – part speaking clock, part drill sergeant during the session – calls time. Muir barely notices. Her head is slumped somewhere between her knees, trying to suck up the thin mountain air. 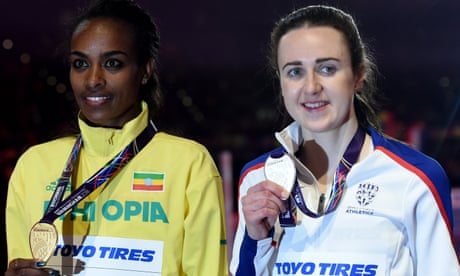 Such sessions are part of Muir’s plan to peak for the European Athletics Championships next month in Berlin, where she hopes to double up in the 800m and 1500m and lay down a hefty marker for the world championships next year and the 2020 Olympics in Tokyo.

With Mo Farah having moved to the marathon, Muir is at the vanguard of the next wave of young British track talent crashing through. Certainly her range is extraordinary.

During the past two years alone she has set a number of British and European records at distances ranging from 1,000m to 5,000m while her medal cabinet is steadily expanding. But there is something else that stands out about Muir: she speaks out.

After the 1500m final at the Rio Olympics, won by Genzebe Dibaba, she admitted to having “doubts” about whether the result could be trusted.

At the world indoors in March she said she no longer talks to Dibaba because of the Ethiopian’s links to Jama Aden, who is under investigation for drugs offences.

Both Dibaba and Aden have denied committing any doping violations.

Is she ever tempted to bite her tongue? “I think I would have a lot easier life if I didn’t say stuff,” she says, with a wry smile. “But, at the same time, people might not understand what is going on. I am honest, so I say what I feel – within limits.”

Muir, who has repeatedly called for more testing in her sport, admits to receiving some abuse following her comments about Dibaba. “There was a bit. You would have to expect that. I was asked a question and I gave the answer.”

And she nods when Young calls for more uniformity of testing around the world.

“That should be the absolute basic for anyone and any country. And if the country can’t provide it, then it shouldn’t be in the sport. I don’t need to talk specifics but I am sure other people can look into which countries don’t provide that.”

However, Team Muir are more reticent when discussing the brief hire of David McHenry, a strength and conditioning coach at the Nike Oregon Project – whose head coach, Alberto Salazar, is being examined by the US Anti-Doping Agency.

But they insist they intended for McHenry, who is not under investigation, to help with only remote video coaching, and it is clear they were not prepared for the backlash. “Laura didn’t specifically need a strength coach,” says Young.

“It was more that here was someone who was the best in the world and we were looking for that quarter of a tiny per cent of improvement. And there wasn’t a controversy around him.”

Young, who was an excellent runner himself but has put on one or two pounds since retiring, says he may look for someone to fill the role, “although I was doing the S&C before – and technically I have a weightlifting qualification.”

At this point Muir starts to giggle.

“What are you laughing at?” he asks. “Look, this belly wasn’t always there! I don’t have to lift it any more, I just give instructions.”

For now Muir’s sole focus is on this weekend’s Anniversary Games in London, where she will attempt to break Zola Budd’s British one-mile record of 4min 17.57sec, which has stood for 33 years.

“I am really happy with my season so far,” Muir says.

“If I could break the British record I’d be really happy but the field is looking pretty strong,” she says, pointing out that Sifan Hassan, Jenny Simpson, Hellen Obiri and Gudaf Tsegay could help her drive past Budd’s best but also deflate her chances of victory.

Having finished her veterinary studies degree at the University of Glasgow, Muir expects that being a full-time athlete will push her to greater heights – even though she is not yet running any more miles.

“When you are constantly studying, you do end up quite mentally drained,” she says.

“With training you can get away with it – you know what splits you have to do, so you can just get on with it. But when it comes to racing you need to be really switched on. Physically I have always been in good shape but mentally I think I will just be that little bit fresher.”

Muir celebrated completing her degree by visiting a Six Flags theme park in the United States and going on the scariest roller coasters back to back.

“I like to go out and see things,” she says.

“With Rome it was the Coliseum, with China it was the Great Wall, while we did Christ the Redeemer and Sugarloaf Mountain in Rio. You travel to all these amazing places so it would be a shame to just do track, race, airport, home. You’ve got to make the most of it. You’re travelling the world essentially for free and you want to take it in.”

And, unsurprisingly, Muir is already firming up her plans to visit Tokyo in 2020 – even though she confesses she is not always comfortable being in the public eye.

“When I was growing up I never aspired to be an Olympic champion because I thought it was a bit unrealistic for me, I guess,” she says.

“But for any athlete it is the pinnacle of what you want to achieve. I’d certainly love an Olympic gold medal, and I’d take the press and attention that comes with it.”