Like most British athletes Laura Muir has vivid memories of London 2012 – except that hers involve pedalling to a dairy farm in Perth at 5.30am every day to milk cows for hours before dashing home to watch the Olympics on the sofa. Back then she was a talented teenage runner in the first year of a veterinary degree at the University of Glasgow with wistful dreams of making it big. Five years on she enters the world championships in London as indisputably Britain’s best young athlete and, potentially, a huge crossover sporting star.

However, Muir knows the challenge she has set herself is steep and parlous. Not only is she tackling the 1500m and 5,000m in London, which could mean five tough races in 10 days, but she is up against stellar fields in both events. Yet the prospect of that famous line in Macbeth – “double, double, toil and trouble” – becoming a prophecy does not faze her. As she points out, she is used to a packed schedule because she has spent years combining vigorous training with studying to be a vet. 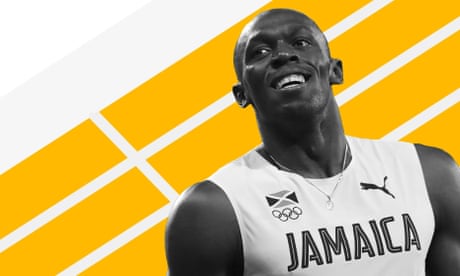 Usain Bolt: the fastest man who has ever lived

“I thrive on doing both,” she says. “I’m very lucky that I have a lot of support and the vet school work hard to help me manage everything. We have had to plan things two or three years down the line – what year can I do part-time, what year can I do a gap year, when I can do placements. But I just want to get the most out of myself and be the best person I can be. You have to see what you are capable of. It’s a lot to take on but they are the two things I love.”

Muir, who will start the final year of her studies after London, has always loved running and animals. It comes as little surprise to hear, for instance, that her first major cash prize, for winning a race at the Highland Games, immediately went on her pets. “I think I got £150, which seemed like a massive amount of money,” she says. “That next week I went down to the pet shop and bought this big cage for my pet rats.”

Her favourite film is Seabiscuit – the story of a little horse with a massive heart who overcomes an inauspicious start to become a huge star. “I quite like to watch it on race day to get the blood pumping,” she says. “It makes me go: ‘Let’s do this thing’ and leaves me all psyched up.”

It is not hard to find parallels between the famous horse and the athlete some Scottish papers call the “wee sparra”. The 24-year-old confesses to having been an average runner as a youngster but has thrived since joining her coach, Andy Young, in her late teens and finally learning to push deep into the pain zone during training and in races. And, like Seabiscuit, Muir has endured various painful setbacks – in particular missing out on a medal at the 2014 Commonwealth Games and coming seventh in the 1500m at last year’s Olympicsafter trying to chase down the controversial Ethiopian Genzebe Dibaba, blowing a gasket and slipping down the field.

Yet Muir showed her class and mettle by bouncing back from that disappointment in Rio to set five British records and two European records at distances ranging from 1,000m to 5,000m in the past 12 months. Another giant leap was taken this March when she won her first major medals by taking gold in the 1500m and 3,000m at the European Indoors in Belgrade.

“That was a big moment for me,” she says. “There were a couple of championships where medals had slipped by. I felt like I was worthy of having some, so to get the two golds – and the way that I did it – I was over the moon. It really boosted my confidence.”

However, she knows that doubling up in London will be an altogether more arduous task. Her best opportunity to win will come in the 1500m, which begins on Friday night, yet it is also one of the most stacked events in the entire world championships. Among the field is the world record holder Dibaba, the Olympic champion Faith Kipyegon and the favourite, Sifan Hassan, who has been revitalised since moving to train with Alberto Salazar. Then there is that most intriguing of wild cards – Caster Semenya, who gave the impression there was plenty more in reserve when taking the 800m Olympic title last year.

To make matters harder for Muir, she lost the best part of a month’s running when she sustained a stress fracture in her foot at the start of the summer. “The doctor showed me the scan and said, ‘There’s a line there; you have got a fracture.’ And I was like: ‘Oh, no’ – but in the back of my mind I already knew something wasn’t quite right.”

Briefly she wondered whether her chances of making it to London had cracked, too. But two sessions a day of swimming and aqua-jogging maintained most of her fitness, while a personal best over 800m in Lausanne recently has given her the confidence to aim for her first world championship medal. Whatever happens Muir intends to leave everything on the track.

“It’s going to be fun but it’s going to be tough,” she says. “It’s a world championships and the 1500m and 5,000m fields are very strong. But my competitors realise that, when they’re up against me, they’ve got a proper race – and I’m going to run as hard and as fast as I can.”