Jürgen Klopp has said Liverpool will “fight for our dreams” of an eighth European Cup final appearance and Roma’s recovery against Barcelona provides the perfect warning against complacency at Stadio Olimpico.

Liverpool take a 5-2 lead into Wednesday’s Champions League semi-final second leg in Rome and have never been eliminated from Europe when holding a first-leg advantage of at least three goals, a record covering 21 ties. Klopp’s team are unbeaten in 13 Champions League games this season and the highest scoring side in the competition with 38 goals. Roberto Firmino, Sadio Mané and the former Roma favourite Mohamed Salah are responsible for 28.

Having seen Roma recover from 4-1 down to overcome Barcelona 3-0 in the quarter-final second leg, the Liverpool manager insists a final place in Kiev on 26 May is not a forgone conclusion for his team but believes Liverpool are equipped to handle the intensity of Stadio Olimpico after thwarting Manchester City’s attempted comeback in the previous round.

Klopp said: “It’s great that the boys gave us the opportunity to be here with their performances, the attitude they showed and all the things they did in thisChampions League campaign. We deserve to be here and if we get the result we need we will really deserve to be in the final.

“We are here to fight for our dreams, that’s how it is, and we want to go to the final. After the game at Anfield a few people had a feeling we lost. We didn’t.

“Meanwhile after a week a few people think Roma only have to win 3-0 but that is quite a result and we will be there as well tomorrow, we will not be waiting in the dressing room.”

He added: “Barcelona did not do a lot wrong in that game but Roma was more ready than Barcelona. Barcelona probably thought it was decided. Everyone is telling us it is quite difficult and possible but no one told Barcelona it is possible to beat you 3-0 because no one could imagine it could happen. But it happened. I didn’t need a warning but, if a warning was needed, there it is.”

Klopp refused to elaborate on why his assistant of 17 years, Zeljko Buvac, left his position just days before the club’s biggest Champions League game in a decade. “We gave a club statement on that and that is all we are saying at the moment.

That is it,” said Klopp, whose right-hand man has been linked to Arsenal. Buvac is unlikely to replace Arsène Wenger as Arsenal manager but could be offered a coaching role. He is highly rated by Arsenal’s head of recruitment, Sven Mislintat, who worked with the Bosnian Serb at Borussia Dortmund.

Klopp renewed his appeal for supporters to savour a momentous football occasion in Rome and not sour the semi-final with a repeat of the violence that left theLiverpool fan Sean Cox in an induced coma after being attacked by Roma fans outside Anfield last week. Roma players trained on Tuesday in tops inscribed with “Forza Sean”. 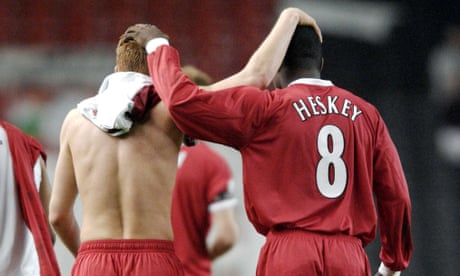 Klopp, who welcomed the “great, great gesture” from Roma, said: “We all have the same opinion and it is a football game. The fight around a football game is only on the pitch and the rules are the football rules. And everybody who doesn’t accept these rules will be sent off. That is clear. It was always like that.

“I really hope after one week of speaking about it – and it was good to speak about it – Sean and his family should hear and feel our support. I really hope everyone understood that tomorrow around the game in this wonderful city in good weather all the people can walk to the stadium and look forward to a fantastic, intense, very important football game. I really hope that will be possible.”